“That ritual hypocrisy [in Jim Crow laws] was made clear when I spent time working on the liberal-minded News & Observer of Raleigh, North Carolina. The newspaper was edited by the doughty Jonathan Daniels, a New Dealer and for a short time press secretary to President Harry Truman….Daniels was a fine writer and open-minded, as were his staff.

“Tagging along with the paper’s columnist Charlie Craven, who could see the funny side of anything, I half-forgot the predicament of blacks. Then one hot day I stopped to drink at a town water fountain, one marked ‘White,’ situated next to one marked ‘Colored,’ and looking up up I saw that the adjacent statue was dedicated to ‘Liberty and Equality.'”

— From “My Paper Chase: True Stories of Vanished Times” by Harold Evans (2009)

Sir Harold Evans, best known as editor of the Sunday Times in London (1967 to 1981) and now as husband of magazine editor Tina Brown, spent time at the News & Observer during a year-long fellowship in the United States in the mid 1950s.

“As representatives of 71,000 North Carolina tobacco growers met last week in Raleigh’s Sir Walter Hotel, they filled the air with their troubles as well as tobacco smoke.

“Some tobaccomen thought the blame for the slowdown [in cigarette consumption] should be put on the cigarette companies, and especially the new filter cigarette publicity. Cried Grower-Warehouseman Fred S. Royster, president of the Bright Belt Warehouse Association: ‘The public is being frightened from tobacco by outlandish medical claims by some of the manufacturers. Much of this advertising is plain silly.’

“Added Market Specialist Phil Hedrick of the North Carolina agriculture department: ‘It’s defensive advertising that’s doing it. A medical authority says, for instance, that there is a high incidence of lung cancer among heavy smokers, and immediately the tobacco companies rush to the defense. Instead of saying that cigarettes relax you, comfort you and soothe the nerves, they deny that their brand will give you a disease . . . ‘

“Editorialized the Raleigh News & Observer: ‘It still seems a little odd that those who most emphasize the possible bad effects of cigarettes on people are the cigarette manufacturers themselves.’ ” 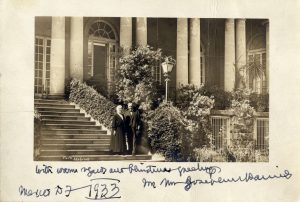 “When I was completely taken in by the Communist agitation at Gastonia in 1929, there wasn’t a bigger jackass or a more gullible sap in the State of North Carolina than I was. I knew absolutely nothing about what I was talking about, as I whooped it up continually in this column in support of the murderous Gastonia defendants. My experience in the bloody Gastonia business is THE thing of all  others which has done most to make me distrust so-called ‘liberalism,’  which so often, like mine was then, is not only ignorant and neurotic, but very dangerous.”

When Lewis died, N&O editor Jonathan Daniels, who had served simultaneously as her patron and her archvillain, wrote that “Nell Battle Lewis made for herself a name that will be long remembered in North Carolina.”

Through no lack of effort on her part, it hasn’t turned out that way. Leidholdt’s thoughtful and thorough biography, which details Lewis’s transitions from “most versatile” graduate at St. Mary’s School to daring advocate of the underclass to hard-line segregationist, has gone virtually unnoticed. (Hat tips to exceptions Ben Steelman of the Wilmington Star-News  [http://www.starnewsonline.com/article/20091114/ARTICLES/911139982?Title=Book-review-Biography-looks-at-a-homegrown-N-C-reformer] and Charles Wheeler of the Greensboro News & Record [http://www.news-record.com/blog/63640/entry/76748].)