“You’d be forgiven for thinking this was the plot of a moody drama or a Dateline special. Actually, it’s the story told in ‘Omie Wise,’ one of the many murder ballads that swept nineteenth-century America. After Wise became pregnant by an engaged man, he (allegedly) killed her to cover up the indiscretion. Court records of Jonathan Lewis’ trial [in Randolph County, N.C.] exist, so we know the tale is, chillingly, true….”

— From “The Murder Ballad Was the Original True Crime Podcast” by Jody Amable at JSTOR Daily (Jan. 30)

“All of North America eventually knew the story (by a number of different titles: ‘Naomi Wise,’ ‘Little Omie,’ ‘Oxford Girl’ or ‘Tragic Romance’), but only the town of Randleman, North Carolina, could embrace the murder as its own. And it did. Not only is Naomi’s grave located in Randleman but the town has named streets, churches, even mills and manufacturing plants after her. Its river is spanned by the Naomi Bridge and downstream its waters tumble over Naomi’s Falls.”

— From “Little Omie: America’s oldest murder ballad about a romance that for whatever reason just didn’t work out” by Tom Leonardi at kzfr.org (May 27, 2015) 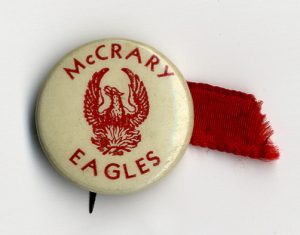 Textile league baseball was once huge in the Carolinas, and in 1937 the team representing Asheboro’s Acme-McCrary hosiery mill made it all the way to the national championship tourney in Wichita, Kansas.

Here and here are some colorful recollections of the team — hat tip to randolphhistory.wordpress.com —  including photos of not only players but also  a surviving (and obviously game-worn) uniform.

Interestingly, the eagle on this pinback button isn’t the one on the uniform sleeve patch, which mimics the one symbolizing FDR’s National Recovery Act.