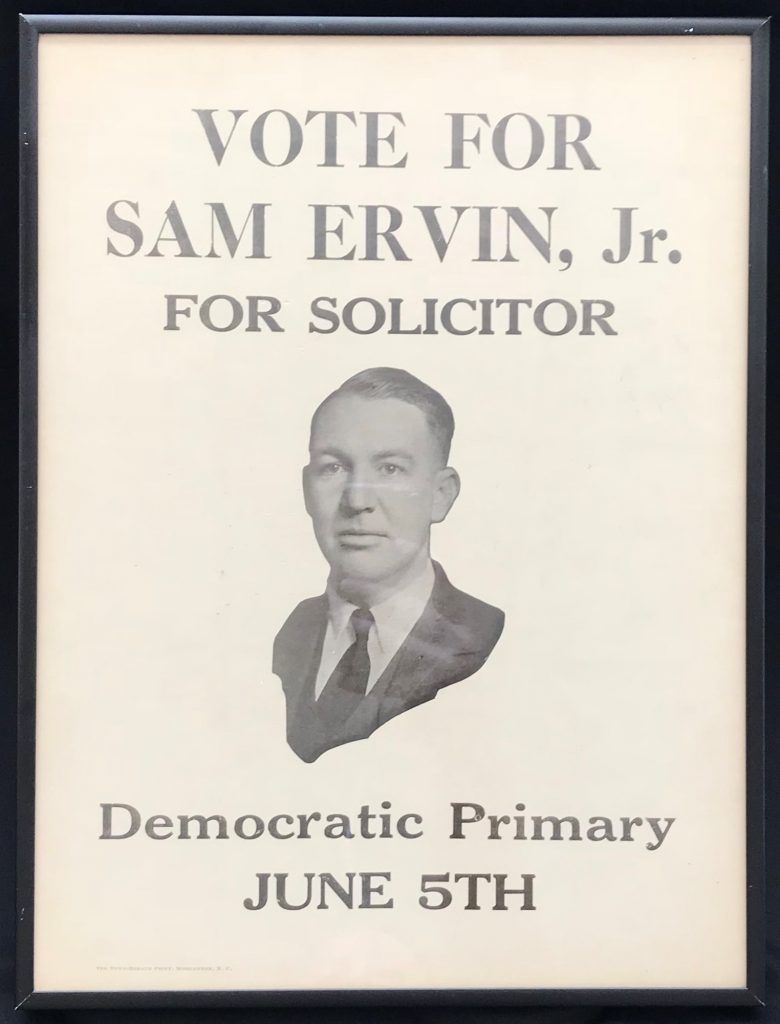 On this day in 1972: In one of the most memorable phrases of the Watergate hearings, Sen. Sam Ervin refers to himself as “just an old country lawyer.”

“I’m just an old country lawyer,” Ervin replied. “I have to do things my way.”

On this day in 1918: Future senator Sam Ervin, in infantry training, writing his “Dearest Mamma” in Morganton:

“Today is Mother’s Day, and according to orders from General Pershing it is to be most fittingly observed by each member of the Amixforce [American Expeditionary Forces] writing a letter to his mother. No order heretofore given has, in my humble opinion, contained so vast a store of true wisdom….

“My hope and prayer is that I may be spared to come back in honor and safety in order that I may repay a small part of the great debt that I owe to you. No one can be under a greater obligation than I, for my mother is the most beautiful and self-sacrificing mother in the world.”

“Susan Herman, president of the ACLU, said the first instance she knows of when prominent politicians used pocket Constitutions for effect was during the Watergate hearings. Sen. Sam Ervin, a North Carolina Democrat, chaired the Senate Select Committee to Investigate Campaign Practices—also known as the Watergate Committee (or even the Ervin Committee)—and the hearings were televised. Ervin used to pull out his pocket copy of the Constitution during the hearings, and it made a powerful visual impact.

–From “The History of the Pocket Constitution: How mini-Constitutions became popular long before the Tea Party” by Betsy Woodruff at Slate (Jan. 28)

On this day in 1960: Sen. Sam Ervin explains to Sen. Everett Dirksen, R.-Ill., why he required more information on a point of floor debate: “I am unable to unscrew the inscrutable.”

“Weeks after the Brown [vs. Board of Education decision in 1954], the press hailed the latest poster boy for the ‘soft Southern approach’…. Samuel J. Ervin, a Harvard-educated state Supreme Court justice, arrived in Washington ready to lend his legal expertise and ‘country lawyer’  charm to the segregationist cause.

“Governor William Umstead tapped Ervin to complete the term of Clyde Hoey, who died in his office…. Ervin privately boasted that he was as ‘unrepentant and unreconstructed’ as Hoey, a Confederate captain’s son….

“Leaders of the Southern opposition saw in Ervin a fresh face that could elevate the segregationist defense above the white supremacist rhetoric of their fathers’ generation.”

— redneck vs. white trash and hillbilly

— Marshal Ney. His execution in 1815 apparently accounts for the first spike, his supposed reappearance as a North Carolina schoolteacher for the second.