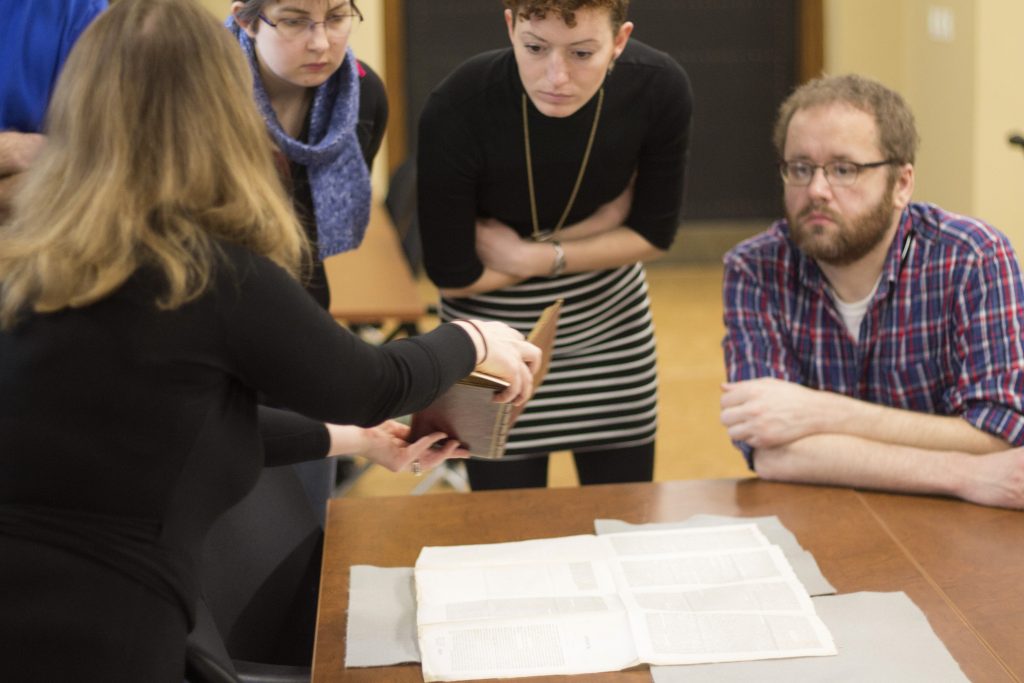 Rough winds may shake the darling buds of May, but the rumbling grahhr of April is what gets us shaking in the Rare Book Collection. We offer for your consideration this broadside from the Beats Collection. The poem is one of several written and performed by controversial Beat poet Michael McClure during the mid-1960s to feature prominent onomonopiac transliterations of beastly speech. Much of McClure’s poetry explores the animistic meatiness of human bodies, abandoning social codes in favor of raw experience.

The poem’s aggressive juxtaposition of elements of vitality and mortality echo the tumultuous events of April, 1968, a watershed month in the history of the United States that saw the assassination of Martin Luther King, Jr., the signing of the Civil Rights Act of 1968, and mounting public protests against the Vietnam War.

Large in format (54 x 73 cm), the broadside arranges McClure’s poem symmetrically along a vertical axis, mirroring words and punctuation. The bright, calligraphic red script draws the eye to the visual arrangement of words, distracting from their syntactic meaning. In the background is a stock image of a lion in blue. Blown large and grainy, the lion confronts the reader with his animal and his printed presence, simultaneously an icon of nature and of manufacture.

McClure was well known for his public readings—Kerouac’s Dharma Bums includes a fictionalized account of his performance at the 1955 San Francisco Six Gallery. Those interested in hearing this poem vocalized are encouraged to consult the catalog for a 1968 recording on vinyl where McClure appears alongside fellow Beats Allen Ginsburg, Lew Welch, and Aram Saroyan, amongst others. McClure also recorded a filmed version in 1966 where he reads the poem aloud to a cage of lions.