Since languages are of human origin, it only makes sense that they go through differing phases as part of an overarching evolutionary process, just as humans do. For all the thousands upon thousands of languages spoken by people today, there are just as many that have completely fallen by the wayside. When we think of dead languages, we often first think of ancient ones—Latin, Sanskrit, Ancient Egyptian, and Sumerian, to name a few. But each of these languages died long ago or have long since evolved into something else. Languages are constantly in the process of dying or evolving. Throughout history, as certain languages such as Chinese, English, and Spanish have become more and more widespread, others, only naturally, have fallen away. Between a language’s birth and death, however, it occupies a number of phases as the population of its speakers changes over time. The Rare Book Collection holds materials representing an abundance of languages, many of each at differing points in these phases. One such work is a short instructional book, the Ikemua, written in Hawaiian by missionary Sheldon Dibble.

Hawaiian is one such language that has passed through most phases of language evolution. It has developed over centuries from other Polynesian languages, flourished, declined, and, at near death, has been revitalized. This piece by Dibble was published in 1840 at a particularly interesting period in the history of the language. While Hawaiian was still widely spoken during this period, it was only just beginning to be written down. Like most other written Hawaiian works from this time, the Ikemua was authored by a non-Hawaiian, a missionary from the mainland United States. Missionaries sought to learn the Hawaiian language in the hopes of publishing a Hawaiian Bible, and, upon discovering that Hawaiians had no written script of their own, utilized Latin letters as the official Hawaiian alphabet. 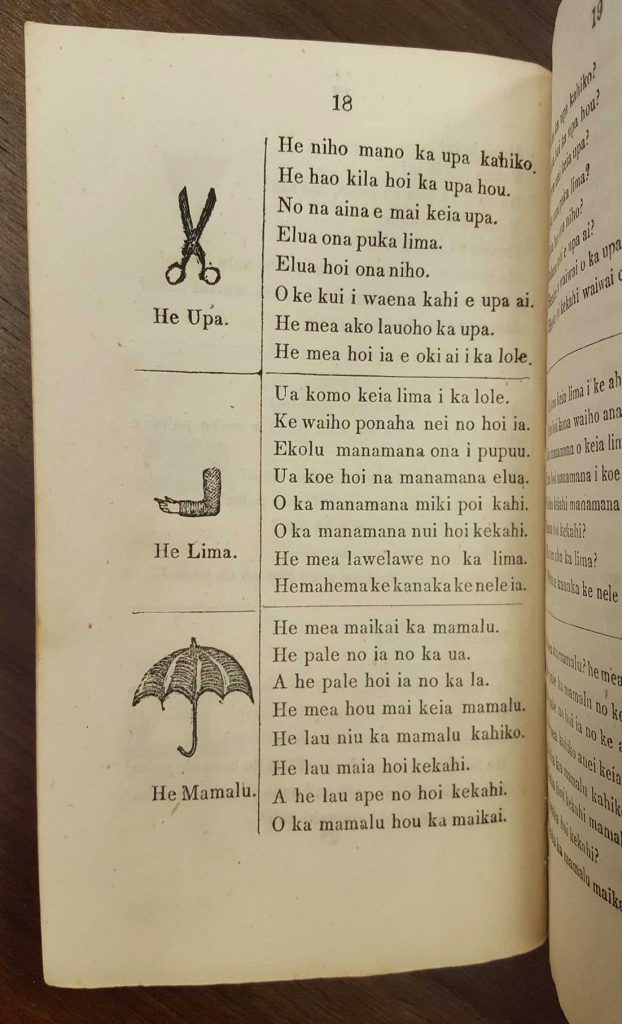 The Ikemua features a wide variety of content, all for the purpose of instilling literacy in speakers of the Hawaiian language. The book is particularly targeted toward children, featuring short stories, paraphrased Bible passages, and short poems that explain everyday objects such as trees, umbrellas, and bells. Dibble includes a short note in the beginning of the book, instructing teachers on how to best teach children. It is quite comprehensive in content and includes detailed illustrations by Dibble’s fellow missionary, Alonzo Chapin.

While the influence of English-speaking people in Hawaii caused a rise in Hawaiian literacy rates, within the next couple of decades, from the mid- to late 19th century, a growing anti-Hawaiian sentiment caused fluency in the language to fall as quickly as its literacy rate had grown. This decline is partly due to the crop of new diseases that began to sweep over the native Hawaiian population, brought about by western settlers. Illnesses such as smallpox and influenza caused the number of native speakers to drop dramatically. As the native population fell and the population of westerners increased, English gradually became the language of those in power in Hawaii, and thus the one that ought to be learned. A mere 53 years after the publication of the Ikemua, a group of westerners within the Kingdom of Hawaii’s government, many of them Americans, staged a coup d’état that ultimately led to the United States’ annexation of Hawaii. Just three years later, in 1896, Sanford B. Dole, the president of the Republic of Hawaii (a short-lived state that existed between the coup d’état and the American annexation) passed a law banning the usage and instruction of Hawaiian in schools. Virtually no Hawaiian children were taught the language, as those caught speaking it in school often faced harsh punishment. Within the span of five decades, westerners in Hawaii went from actively advocating literacy in the Hawaiian language to extinguishing it altogether.

Like some highly-endangered languages, Hawaiian was revitalized somewhat in the 20th century. Starting in the 1950s, Hawaiian began being offered in schools, and new dictionaries and other reading materials were published. A number of Hawaiian language immersion schools currently operate, and today approximately 24,000 people have some degree of fluency in it, about 1.7% of the total population of Hawaii.

Since languages like Hawaiian can sometimes undergo dramatic changes in the span of just a few decades, it is always remarkable to find a document rooted in one particular phase of the language, such as the Ikemua. It stands frozen in time as the Hawaiian language itself has since shifted in its prominence over the years. Hawaiian is only one example of many endangered languages represented in the Rare Book Collection. One can also find works in Navajo, Irish, Rusyn, Basque, Cherokee, Scottish Gaelic, and other endangered languages throughout the collection.

This World War I-era poster by the Irish Women’s Association calls for the recognition of Irish regiments and their prisoners of war during St. Patrick’s Flag Day (an alternate name for the holiday) on March 17th, 1917. An Irish soldier stands in front of a large shamrock emblem, flanked on each side by the names of the four historical provinces of Ireland: Ulster, Leinster, Munster, and Connaught.

The year 2016 marks the 100th anniversary of the Easter Rising, a major uprising against British rule that took place in various locations throughout Ireland. The event heightened tensions between Britain and Ireland, which would only worsen until the Irish War of Independence erupted just three years later, in January 1919. The poster above was created in the period between the uprising and the beginning of the war.

In the early 20th century, Ireland was governed by home rule, meaning that it was self-governed, but still under the ultimate authority of British rule. The arrangement is clearly demonstrated by RBC’s poster, which was presented by the Irish Women’s Association, an organization based at Kensington Palace in London. This poster represents a short-lived transitional period for Ireland, while also commemorating an important Irish holiday and calling to attention the plight of Irish soldiers.

This poster is part of the Rare Book Collection’s Bowman Gray Collection of World War I and II Graphic Materials, of particular interest as we pass through the centenary of World War I (1914-1918).

Today, December 30th, marks the 150th birth anniversary of renowned author Rudyard Kipling. Kipling was born in British colonial India and spent the first five years of his life and much of his young adulthood there. As such, a great number of his works are inspired by his childhood in India, including his arguably most well-known work, The Jungle Book (1894). The first edition of this work is particularly notable for its design.

In The Jungle Book, readers are introduced to a cast of colorful characters, some human, and some animal. Many of them have endured in the public consciousness to this day, such as the boy Mowgli, raised by jungle creatures, and Rikki-Tikki-Tavi, a clever, cobra-slaying mongoose. All these characters are brought to life through Kipling’s imaginative poetry and prose. 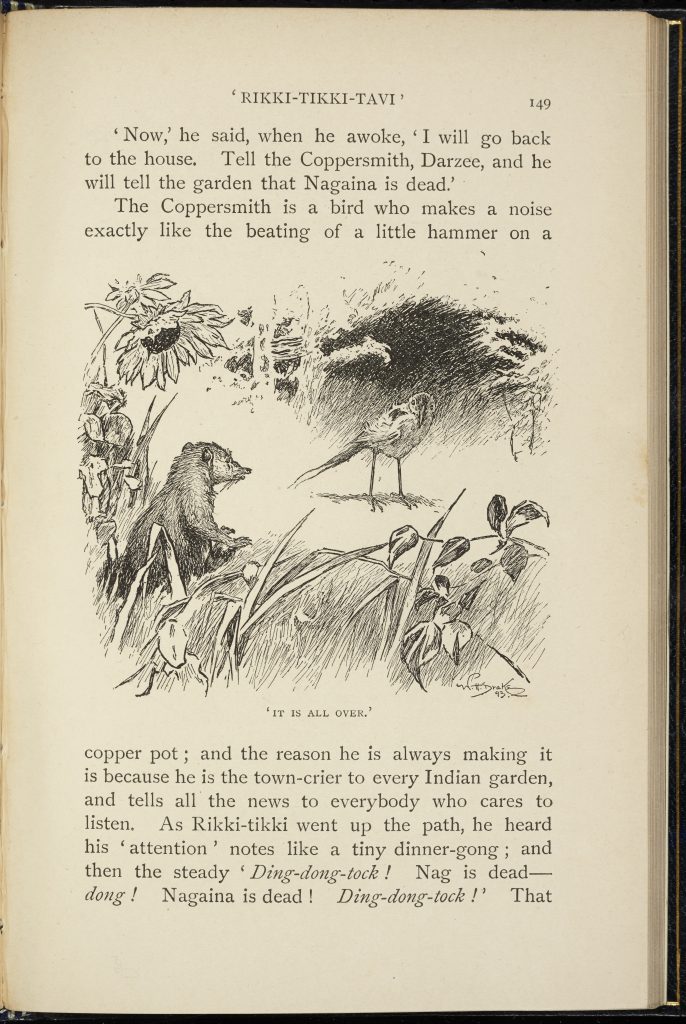 Additionally, they are immortalized by the memorable illustrations from the first edition of the book, designed by illustrators W. H. Drake, P. Frenzeny, and John Lockwood Kipling, Rudyard Kipling’s own father, who collaborated with his son on many works. These illustrators also designed the images on the original publisher’s binding of the book, which features three elephants with riders and Rikki-Tikki-Tavi encountering a cobra. Though the RBC’s copy was rebound sometime after the 1930s, the original cover and its spine were preserved in the new binding. 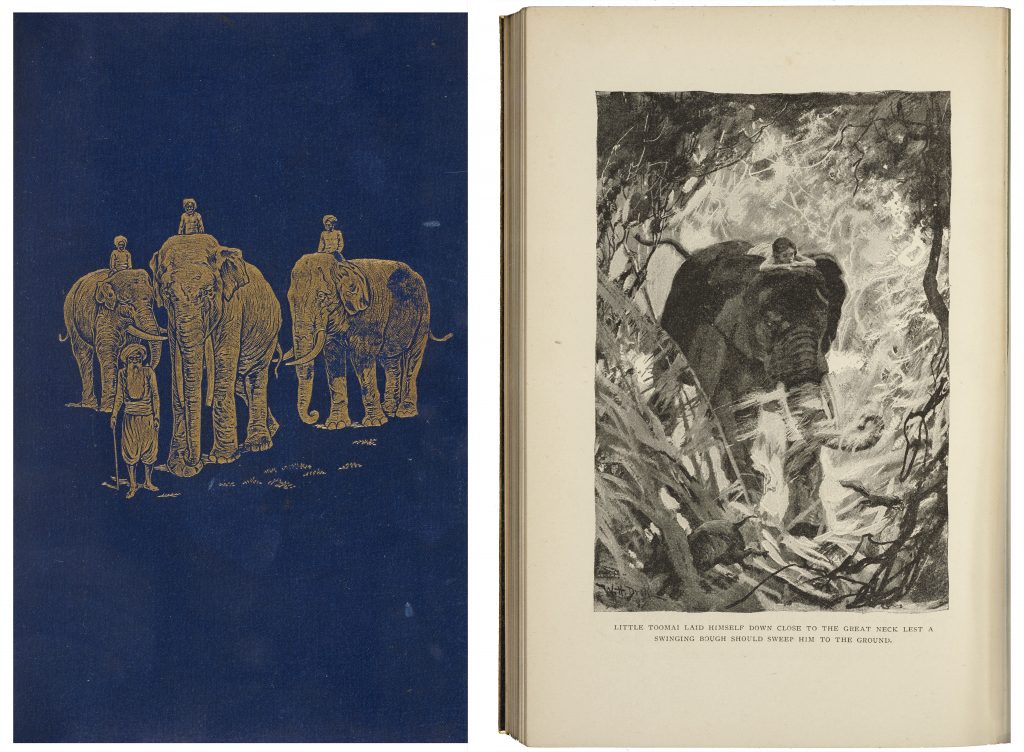 Kipling’s prolific publishing career is well documented in the RBC, where English-language literature has long been a collection strength. 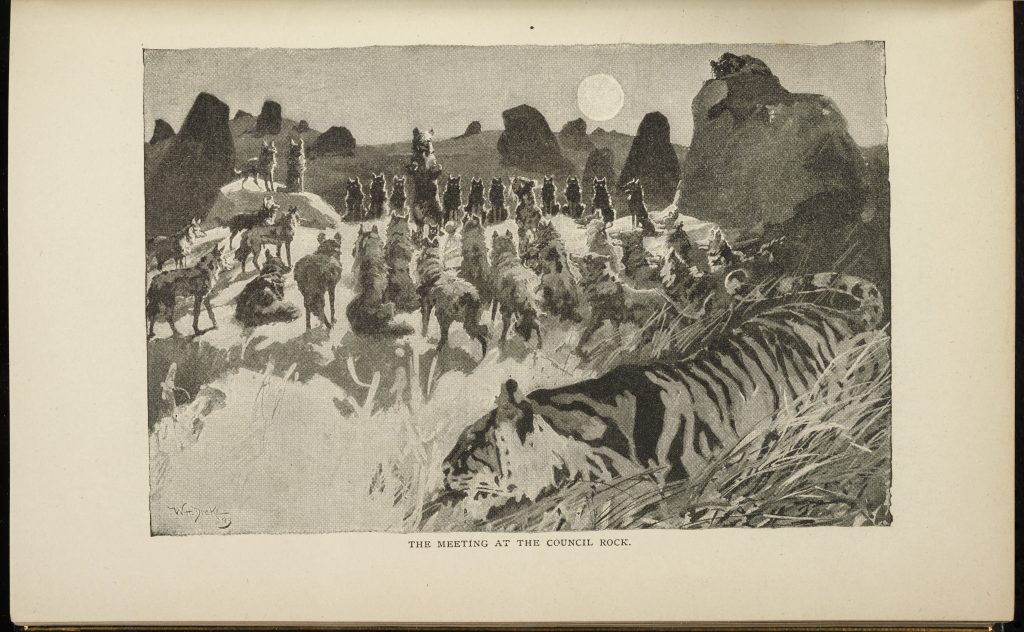