As our Recent Acquisitions Evening approaches, we’re continuing to feature items that will be on display. 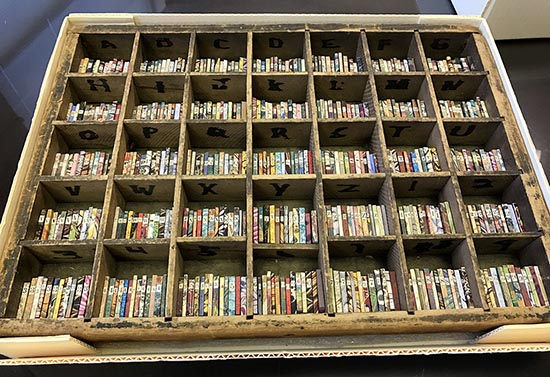 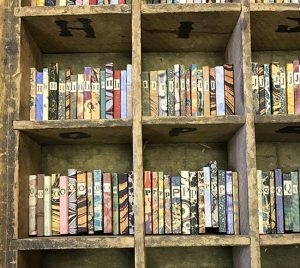 Analog Tweeting is a set of miniature handmade blank books, each with a letter on its spine, in a found wooden tray. Each tiny letter has been reclaimed from a discarded text. Pattison’s intention is for the reader/tweeter to compose a tweet using the books as movable type before photographing and posting it.

“…This forces the user to be more thoughtful in what they say and post, and can give them time to edit or reconsider what they are sending and the audience to whom they wish to send it.”

Are you ever guilty of being too quick to hit send? Embrace a slower pace and try your hand at analog tweeting at our Recent Acquisitions Evening on March 22. 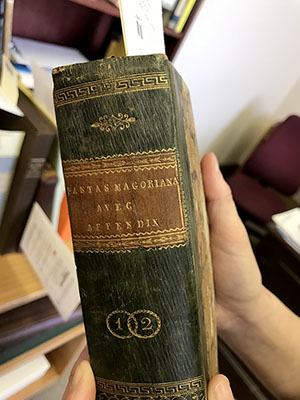 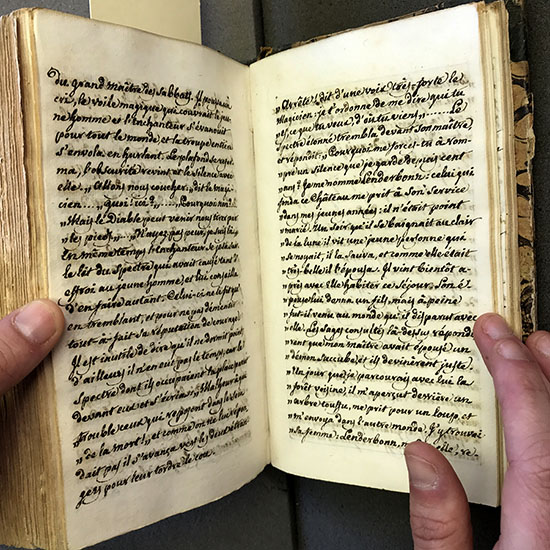 Among them is Helena Bochořáková-Dittrichová’s 1929 Z Mého Dětství (From my Childhood). 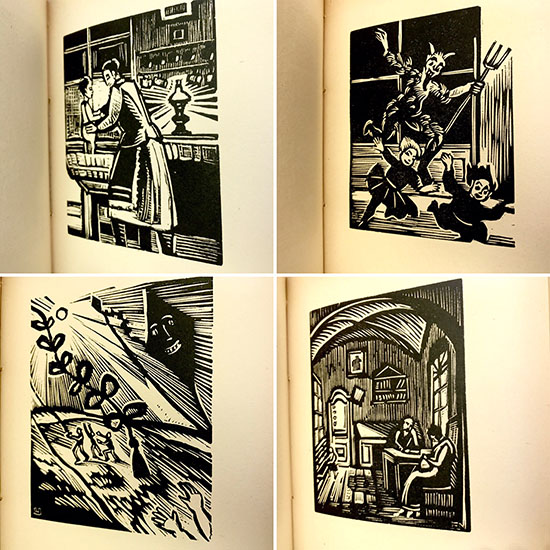 Considered to be the first graphic novel published by a woman, Z Mého Dětství is an autobiographical work told entirely through beautiful woodcuts, mostly depicting domestic, middle-class scenes. While not much is known about its Czech author, Bochořáková-Dittrichová was the subject of a 2014 exhibition at the National Museum of Women in the Arts — a fitting recognition of a talented artist and pioneer.

In anticipation of the Rare Book Collection’s Recent Acquisitions Evening on March 22, we’re highlighting a number of the items that will be on display. 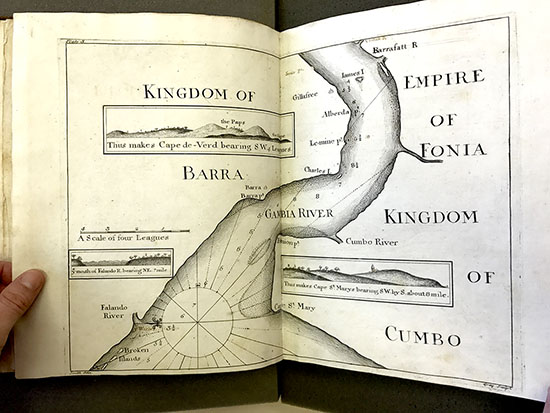 Smith was a surveyor for the London-based Royal African Company, and Thirty Different Drafts of Guinea represents a record of the British slave trade in West Africa in the early part of the eighteenth century. A large folding coastal map shows the locations of slave forts on the African coast from Gambia to Whydah (in present-day Benin).

This appears to be a pre-publication copy, in which some of the plates are in an early, less complete state — later printings of the plates include alterations and additions.

This copy belonged to Edward Deane, director of the Royal African Company’s fort at Whydah, whose annotations appear in the book. It also contains a subscriber list that enumerates people committed to purchasing it. The list includes Barbados merchants, Royal African Company agents, and Irish noblemen and clergymen, as well as John, Thomas, and Springett Penn — sons of Quaker and Pennsylvania founder William Penn.

This is the first in a series of posts featuring items that will be on display during the Rare Book Collection’s Recent Acquisitions Evening on March 22. 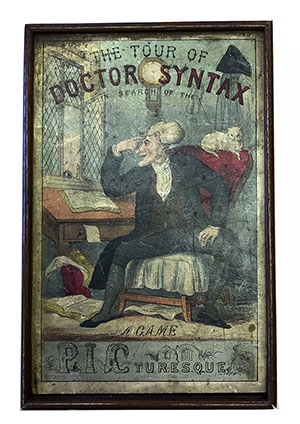 Combe’s poem skewered the aesthetic ideal of the picturesque, which was ascendant at the time of the poem’s publication in 1809. Lovers of the picturesque prized rustic, natural, and asymmetrical scenes that reconciled the tension between the beautiful and the sublime. English writer, artist, and educator William Gilpin articulated the notion of the picturesque in a 1768 essay and depicted it in sketches that often featured ruins in the English countryside.

The picturesque ideal caught on like wildfire among England’s educated and moneyed classes, who had increasing access to the countryside with the expansion of railroads. Soon England’s Lake District filled with tourists observing and sketching rustic scenes.

As with any cultural movement that captures the public imagination so completely, the picturesque and its devotees became ripe for satire at the height of its popularity. With his poem The Tour of Dr. Syntax in Search of the Picturesque, writer William Combes seemed to relish the opportunity.

Originally published with humorous caricatures by artist Thomas Rowlandson, the poem depicted a Don Quixote-style “hero,” probably modeled on Gilpin. The character Dr. Syntax undertakes a series of adventures in which he’s so blinded by his quest for picturesque scenery that he falls victim to all manners of peril. 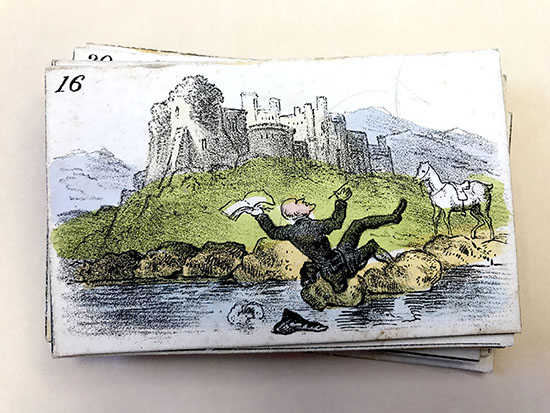 The poem itself became wildly popular, becoming the subject of a variety of cultural adaptations. One of them is this parlor game. 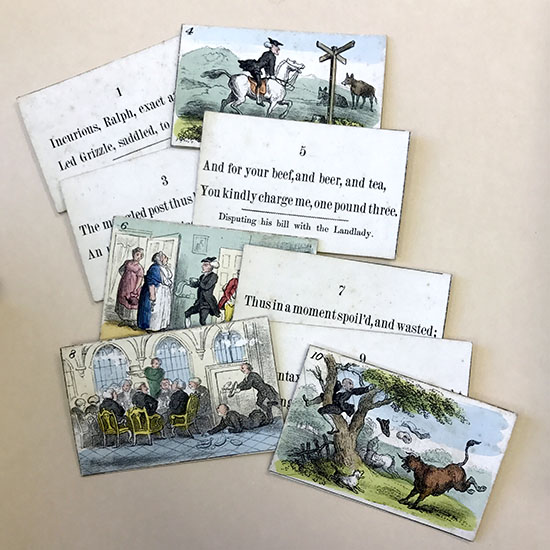 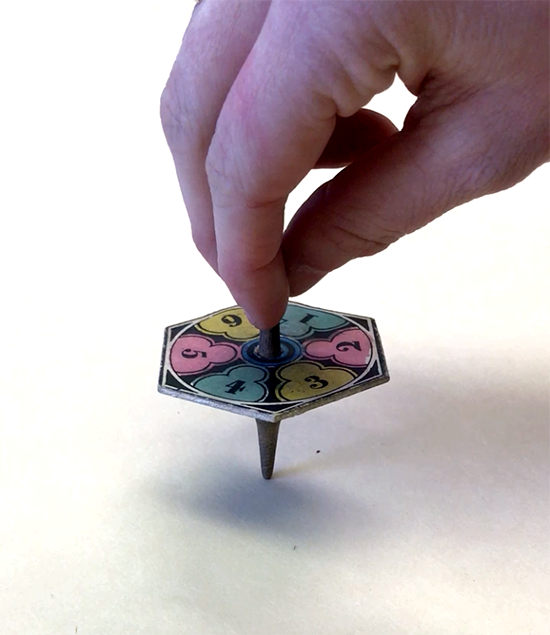 With a complicated set of instructions (“The lines refer to the picture whose number is next in rotation. Namely No 1 card refers to No 2 picture…”) and a colorful teetotum to spin, the game is a fantastic example of literature adapted as a board game.

This and many other intriguing items will be on display at the Rare Book Collection’s Recent Acquisitions Evening, a not-under-glass display of some of the Collection’s notable acquisitions. We hope you’ll join us on March 22 for the unique opportunity to see these incredible items up close.

We’re excited to announce that the Rare Book Collection will host its biannual Recent Acquisitions Evening on March 22. The event, a not-under-glass display, is a unique opportunity to closely examine some of the notable items we’ve acquired in the past two years.

This year’s event features important works on the history of printing, books that invite interaction between viewer and object, and a number of items that challenge the traditional meaning of the word book. The Rare Book Collection’s global focus will also be emphasized, with books printed in London, Mexico City, Cameroon, Paris, Augsberg, Tehran, Saigon, Rome, Mexico, Nigeria, and more.

One item of particular note that will be on display is the Library’s eight-millionth volume, presented by the Hanes Family Foundation.

In the weeks leading up to the event, we’ll feature a selection of these items on the blog — but nothing compares to seeing them in three dimensions, so we hope you’ll join us!

The Rare Book Collection Recent Acquisitions Evening takes place Wednesday, March 22, 2017 from 5 p.m. to 7 p.m. in the Fearrington Reading Room. The event is free and open to the public.

Visitors will also have the opportunity to visit the exhibition World on Fire in Flames of Blood: Narratives of the Russian Revolution, which features materials from the RBC’s André Savine Collection.