Last week, a congenial group gathered for Russian tea (and American coffee) in the Friends of the Library room in Wilson to hear visiting researcher Ekaterina Turta speak about the Russian writer A. M. Remizov. 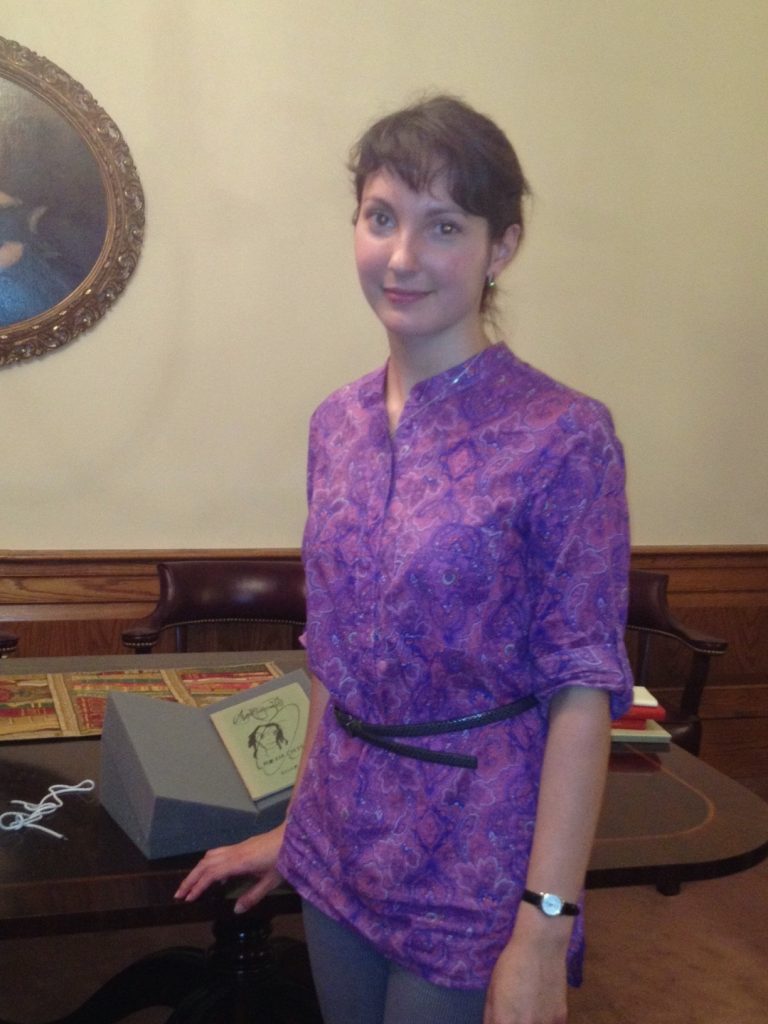 As Ms. Turta explained, “Remizov was a writer who belonged to the generation of Russian emigrants leaving Russia after the October Revolution of 1917. He lived first in Berlin, then in Paris, where he died in 1957. His works were not published in Russia for a long time and in just the last ten years his personality and creative works have become a subject for Russian scholars. Most of the first editions and other related primary source documents are not available in Russia, but rather in the United States:  The André Savine Collection (Rare Book Collection, Wilson Library, UNC Chapel Hill), Remizov Papers (Amherst Center for Russian Culture), The Bakhmeteff Archive (Columbia University Libraries).”

Ms. Turta, who was engaged in postgraduate study at Tyumen State University in Russia, has spent the past year at Chapel Hill as a Fulbright Visiting Student Researcher, exploring the rich modern Russian holdings of the Savine Collection. UNC-Chapel Hill acquired the more than 10,000 volumes of books, serials and newspapers, rare manuscripts, and photographs collected by André Savine (1946-1999) – proprietor of the Parisian bookstore, Le Bibliophile Russe – in 2002, enabled by a generous donation from Van and Kay Weatherspoon of Charlotte, North Carolina.

“The Savine Collection contains the first foreign editions of Remizov’s novels, criticism on them, and other rare materials related to him,” notes Ms. Turta. “The most exciting experience for me was to read the thin Remizov books based on Breton, Polish, and Druid legends, and on Old-Russian novels, all of which came out of the Paris publishing house “Opleshnik” in the 1950s: Круг счастья: легенды о царе Соломоне (Savine PG3470.R4 K84 1957), Повесть о двух зверях: Ихнелат (Savine PG3470.R4 P55 1950), Мелюзина. Брунцвик (Savine PG3470.R4 M45 1952), etc. The first editions of these books are available only at a few libraries throughout the world: Bibliothèque de la Sorbonne, The British Library, National Library of Israel. Here at Wilson Library you can find them all together!”

On display were a number of the works that Ms. Turta consulted. She spoke eloquently to the group about the importance and power of first editions and praised the strong supporting and allied holdings in UNC’s Davis Library and the Rare Book Collection, which made thorough research possible, since her studies concentrate on the problem of translating Remizov, the perception of his works in England and America, and the influence of English Literature on his writings.

The connections between Remizov and Western modernists, such as the Bloomsbury Circle and James Joyce, prompted much discussion in the question and answer session. Ms. Turta acknowledged how convenient this was to explore at Wilson, given the RBC’s fine holdings of Joyce and early twentieth-century British literature.

In conclusion Ms. Turta reiterated “that it is a great pleasure to have access to such marvelous resources as Davis and Wilson Libraries” and expressed her gratitude to “the wonderful, always-ready-to-help, patient, and enthusiastic librarians who work there. Thank you for providing me with unlimited access to such amazing materials!”