As 2015 draws to a close, you may be preparing to send a round of greeting cards to friends and loved ones. In the present time, nearly 6.5 billion greeting cards are bought and exchanged annually in the United States—about 1.6 billion of those, during the Winter holiday season. The practice of exchanging holiday cards near Christmas began in the nineteenth century, when technologies in printing, primarily chromolithography, reduced the price of producing color-printed cards.

The history of Christmas greeting cards is inextricable from the history of lithography, in general, and chromolithography in particular. What is considered to be the first true Christmas card was printed in 1843 by Jobbins of Warwick Court, Holborn, London, using lithography, based on a design by John Calcott Horsley. Horsley was inspired by the commercial success already enjoyed by Valentine Day cards—and by a desire to reduce the time spent writing Christmas letters (George Buday, The History of the Christmas Card. London: Rockliff Publishing Corporation, 1954: 6). The idea was quickly adopted and printers used a variety of printing, embossing, die-cutting, and other decorative techniques to produce cards during the 1840s and 1850s. However, widespread production of Christmas cards did not occur until the 1860s-70s, when the use of chromolithography in commercial printing enabled cheap mass production of cards.

Lithography is a planographic printing process, meaning that the printing surface is flat—not raised, as in relief printing, or recessed, as in intaglio printing. Lithography works on the basic principle of the separation of oil and water: a hydrophilic surface, such as limestone, is drawn upon using a waxy substance; the surface of the stone is then wetted with a solution of gum arabic, then inked using an oil-based ink. The oily ink clings to the waxy portions of the stone and avoids the areas damp with water. A sheet of paper is then pressed to the surface of the stone, yielding a print.

Because of its flat printing surface and the ability of the artist to draw directly on the stone, lithography offered artists a freedom of design on par with drawing on paper. Numerous artistic effects—including pen-and-ink, chalk, and watercolor—could be achieved using a lithographic stone. Moreover, the mechanism of the lithographic press was faster to operate than, for example, the rolling presses used to produce engravings; it also exerted less pressure on the printing surface, reducing plate wear. The combination of these factors meant that lithography could produce larger edition sizes in less time than engraving.

In chromolithography, multiple stones are used progressively to produce multi-colored prints. Each color must be printed from a separate stone. As the sheet is passed through each successive print, the different colors blend together, resulting in vibrant tones and shades. For more information, and an animated progressive proof showing the process of chromolithography, check out this online exhibition from the New York Public Library (requires shockwave). The American Antiquarian Society also has an informative online exhibition, including a gallery of Christmas cards designed by lithographic artist Louis Prang.

The example above, printed around 1887, is a typical example of a Victorian greeting card: the central image shows a colorful, chromolithograph scene printed on a heavy card depicting two young children dressed in Christmas finery. A four-line poem functions as a seasonal greeting. The card is mounted with maroon ties on an embossed gold and silver card with decorative maroon and gold thread sewing.

The inside of the card holds a bit of a surprise: instead of the Christmas greeting we might expect to see, the card instead reveals a monochrome lithographic booklet of the text of William Wordsworth’s poem “We Are Seven”: 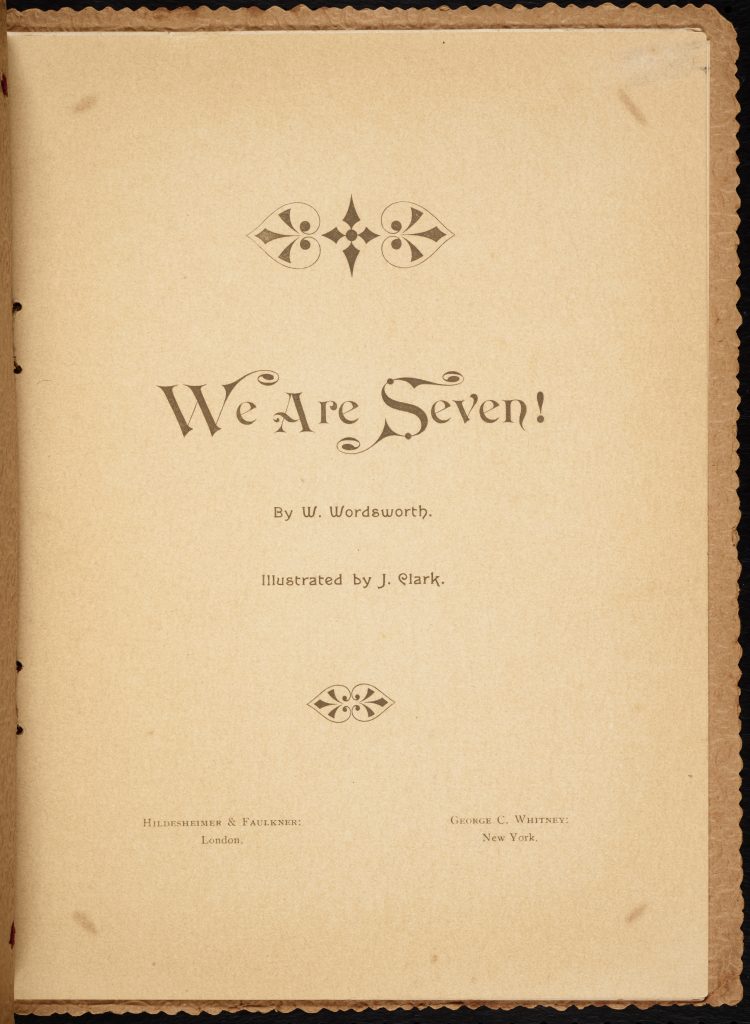 “We Are Seven” first appeared in Lyrical Ballads (1798). It would prove to be one of Wordsworth’s most enduringly popular lyrics. The Rare Book Collection contains multiple examples of the poem printed separately in cheap formats for popular consumption, including two chapbook editions, a broadside, and several lithograph gift booklets. The example above closely resembles the other gift booklets in its format and design: alongside Wordsworth’s poem are sentimental scenes of rural life that echo the setting of the poem but were probably not produced specifically to illustrate its narrative. 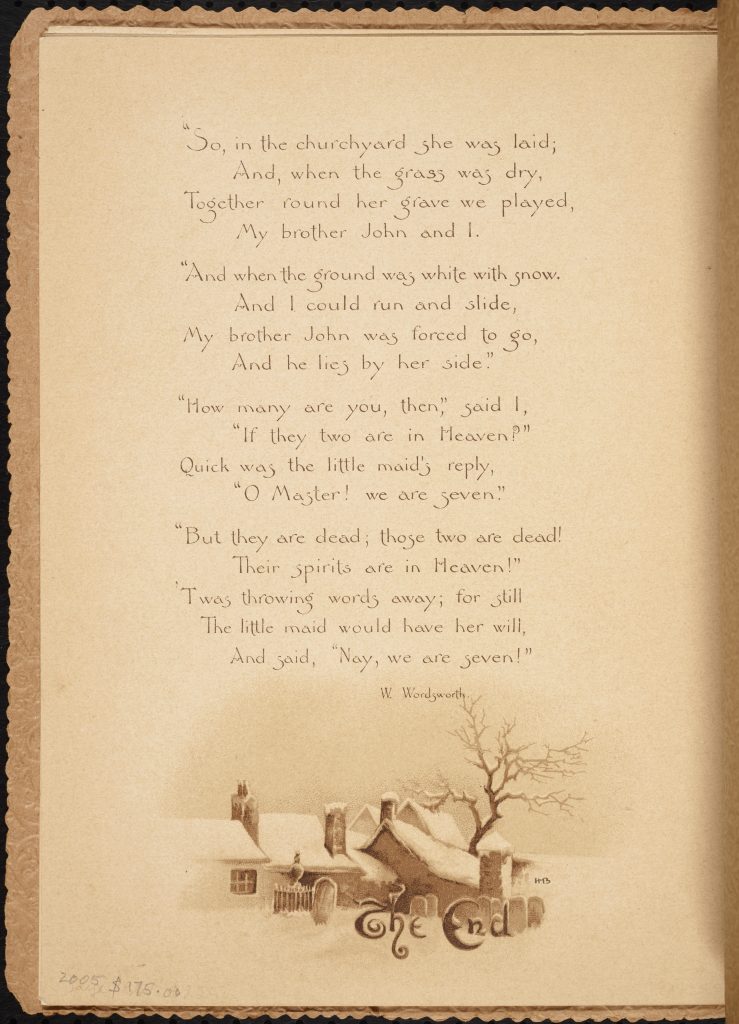 Though there are no overt holiday references in “We Are Seven,” it’s thematic message of remembering absent loved ones is perhaps appropriate, if somewhat morbid, for the season of Auld Lang Syne.

Wordsworth is much remembered in the RBC these days as we make our preparations for the Spring exhibition Lyric Impressions: Wordsworth in the Long Nineteenth Century. The exhibition will be mounted from January 20-April 15, 2016, with an opening keynote lecture on February 22 by Duncan Wu, Professor of English at Georgetown University, titled “Wordsworthian Carnage.” Stayed tuned for more information on the exhibition opening, and keep reading the RBC blog for more highlights from the William Wordsworth Collection!