This blogger has a confession: I love looking at fashion magazines. They always provide great ideas on what styles and colors work well together, which is certainly important as I decide what to wear before heading into the 2nd floor reading room of Wilson Library—always a hub of both research and fashion! (See our sweater posts last winter.) So why not look beyond the current magazines and see what people were wearing in the past?

The Rare Book Collection has a number of fashion periodicals of days gone by. My attention was drawn to ladies’ magazines of the 1840s to the 1860s, which featured not only fashion plates but also short stories and essays that were geared toward the nineteenth-century female reader.

The most well-known of these is Godey’s Lady’s Book, a monthly periodical published in Philadelphia. Louis A. Godey began publishing Lady’s Book in 1830; it underwent a number of title changes in its 68-year run before it ceased publication in 1898. During the 1840s, Sarah J. Hale (author of “Mary Had a Little Lamb” and an influential figure in making Thanksgiving a national holiday) was the editor of Godey’s. Each issue included a full-page plate illustrating ladies’ fashion, as well as short stories and essays.

In search of fashion inspiration, I checked to see what women were wearing 150 years ago. The November 1864 issue of Godey’s featured two detailed wood engravings of winter coats—the full length “Estramadura” and the shorter “Winter Jacket, in Double Crochet.” Both struck my eye for their careful detail and the way they conformed to the shapes of the dresses underneath. Like fashion magazines of the modern era, Godey’s included details on where to find the Estramadura (from the establishment of G. Brodie, in case you were wondering), as well as an assurance that the wood engraving was drawn from the actual articles of clothing, not the artist’s imagination. Even more fascinating, to my mind, was the winter jacket, for which the magazine included a crochet pattern so readers could make their own. Given the relatively modern style of the jacket, perhaps I should attempt to crochet this jacket for myself (or at least find a friend to make it for me). Who says fashion from 150 years ago has gone out of style?

The RBC’s holdings aren’t confined to just American periodicals, however. One of the most influential fashion magazines of the 1840s was Le Moniteur de la Mode (AP20 .M655), which began publication in Paris in 1843. Self-described as “Journal du Grand Monde,” it included articles on fashion, literature, fine arts, and theater. Issues were published on the 10th, 20th, and 30th of every month.

The most influential part of Le Moniteur de la Mode was not the articles but the hand-colored engravings by Jules David. The French artist created over 2,000 plates for the magazine before he died in 1892. Many of these were reprinted in other periodicals, such as Englishwoman’s Domestic Magazine, which found it more cost-effective to reuse David’s images than to furnish their own. 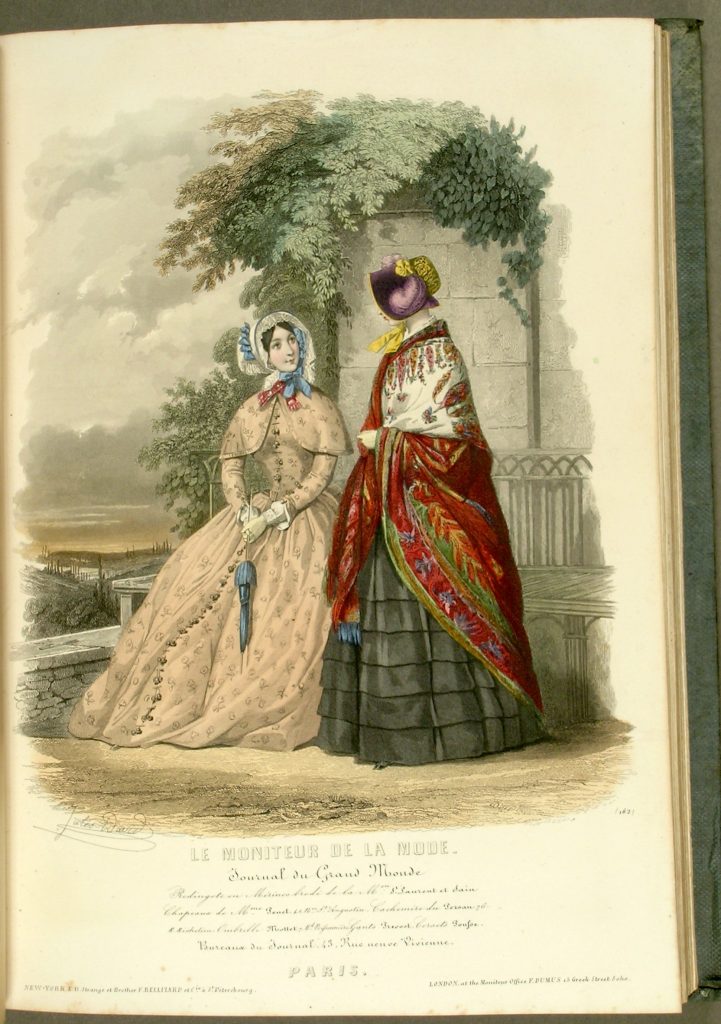 David’s plates were noted for their incorporation of contemporary décor into their backgrounds, a practice that other artists later began to adopt. David’s work contains great detail, such as the red cashmere shawl with its intricate designs (above). He employed both indoor and outdoor scenery—such as the room carefully decorated with a painting and small statue at right, and the hilltop arbor overlooking a distant landscape at left.

While I have found plenty of sartorial inspiration in these magazines, others have found them to be rich sources for research. Scholars have used these and similar ladies’ periodicals to study changes in style and printing history, as well as the role of women. No matter your point of interest, there is much to explore in these magazines.