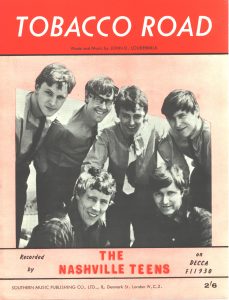 Our friends downstairs at the North Carolina Collection’s A View to Hugh blog have a wonderful post up about singer/songwriter and North Carolina native John D. Loudermilk, featuring some fine candid photographs by Hugh Morton. Author David Meincke touches briefly on the dozens of artists who have recorded Loudermilk’s most famous composition, “Tobacco Road”, which inspired us to post a few additional “Tobacco Road” clips from our John D. Loudermilk Collection.
Allmusic.com lists over four dozen artists as having recorded the song, and even their database is missing a couple, including this unexpectedly funky 1978 version by Richie Lecea (SFC 45-5754): richie_lecea_tobacco_road
And this 1961 take from England’s Johnny Duncan and the Blue Grass Boys (SFC 45-5753): johnny_duncan_tobacco_road
Another English group, the misleadingly named Nashville Teens (pictured), made “Tobacco Road” a top-20 hit on both sides of the pond in 1964. You can watch them lip sync it on television here.
Loudermilk wrote other hit songs (“A Rose and a Baby Ruth”, “Indian Reservation”), but “Tobacco Road” will likely remain his most lasting contribution to American popular culture. If you have a favorite version, please share in the comments.