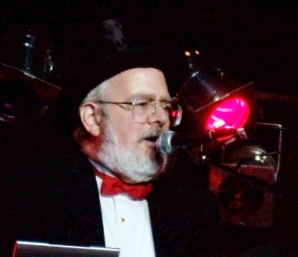 On Friday, February 26th, the Southern Folklife Collection will be hosting legendary broadcaster Barry Hansen, aka “Dr. Demento”, longtime host of the nationally syndicated Dr. Demento Show. He will be presenting a lecture and spinning records on the subject of “Humor in the 20th Century: Country and Blues”.  The program begins at 5:45 in Wilson Library’s Pleasants Family Assembly Room, to  be preceded by a reception at 5:00, and is free and open to the public.
Mr. Hansen should have much to say on the subject of humor in country and blues music, as before he adopted his Dr. Demento persona to become radio’s greatest spinner of humorous songs he was a young musicology student at UCLA, the original home of the John Edwards Memorial Foundation. In the mid-sixties he began his radio career as the host of the “Old-time Record Review”, a scholarly program devoted to the folk, blues, and country music collected by the JEMF. When the JEMF Collection moved to UNC to become the basis of the Southern Folklife Collection , so too did open-reel tapes of 39 episodes of “Old-time Record Review”.
Listen below to a clip of novice DJ Barry Hansen introducing Hank Williams’ “Mind Your Own Business”, from a 1965 episode of “Old-time Record Review” (SFC# FT-1616):
Hansen