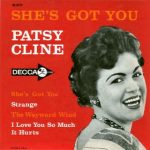 The late great singer-songwriter Hank Cochran penned many country hits over the course of a half-century long career in Nashville, including  “Make The World Go Away” (for both Ray Price and Eddy Arnold) and “It’s Not Love (But It’s Not Bad)” (for Merle Haggard), but his most lasting contribution to the country songbook may have been “She’s Got You”, written specifically for Patsy Cline in 1961 as a follow-up to “I Fall to Pieces”, a song Cochran had written in collaboration with Harlan Howard.
According to Mark Bego’s I Fall To Pieces: The Music And Life Of Patsy Cline, Cline had trouble completing her December 17, 1961 recording session “because she was so emotionally involved with the lyrics of ‘She’s Got You’ that she kept breaking down and sobbing in the middle of it.” Cline reportedly suffered a nervous breakdown the very next day, so it’s safe to assume she had some other issues at the time. Nonetheless, “She’s Got You” is sad enough one can certainly imagine it bringing a singer to tears.
PatsyClineClip
(clip from SFC CD-4761)
The song has since been covered by Dottie West, Loretta Lynn, and LeeAnn Rimes as well as by a number of male artists, who tended to change the initial pronoun in the interest of heteronormativity. A couple of the more recent variations come from singers more closely associated with British new wave and Mississippi rhythm and blues, respectively. Elvis Costello recorded a version for his 1981 country-themed album Almost Blue (clip from SFC CD-4826):
ElvisCostelloClip
And Little Milton included “He’s Got You” on 2000’s Feel It (clip from SFC CD-2520):
LittleMiltonClip