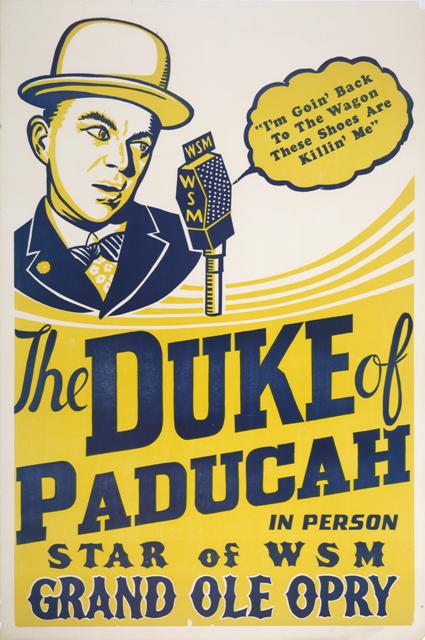 Comedian and banjo player Benjamin Francis “Whitey” Ford (b. 1901 in DeSoto, Missouri), aka the “Duke of Paducah,” appeared on the Grand Ole Opry from 1942 to 1959.  Ford originally developed the Duke character on the air of KWK-AM, St. Louis in the early 1930s and carried the character over to his own show with Red Foley in 1937, the Renfro Valley Barn Dance.  Ford’s brand of folksy one-liners reached beyond fans of country music and he was just as popular on tours with stars of early Rock and Roll like Elvis Presley.  The image above features the Duke’s signature tagline: “I’m going back to the wagon, these shoes are killing me.”  The poster, call no. XOP-30021/144, is part of collection #30021: Southern Folklife Collection Posters, circa 1847-2008.