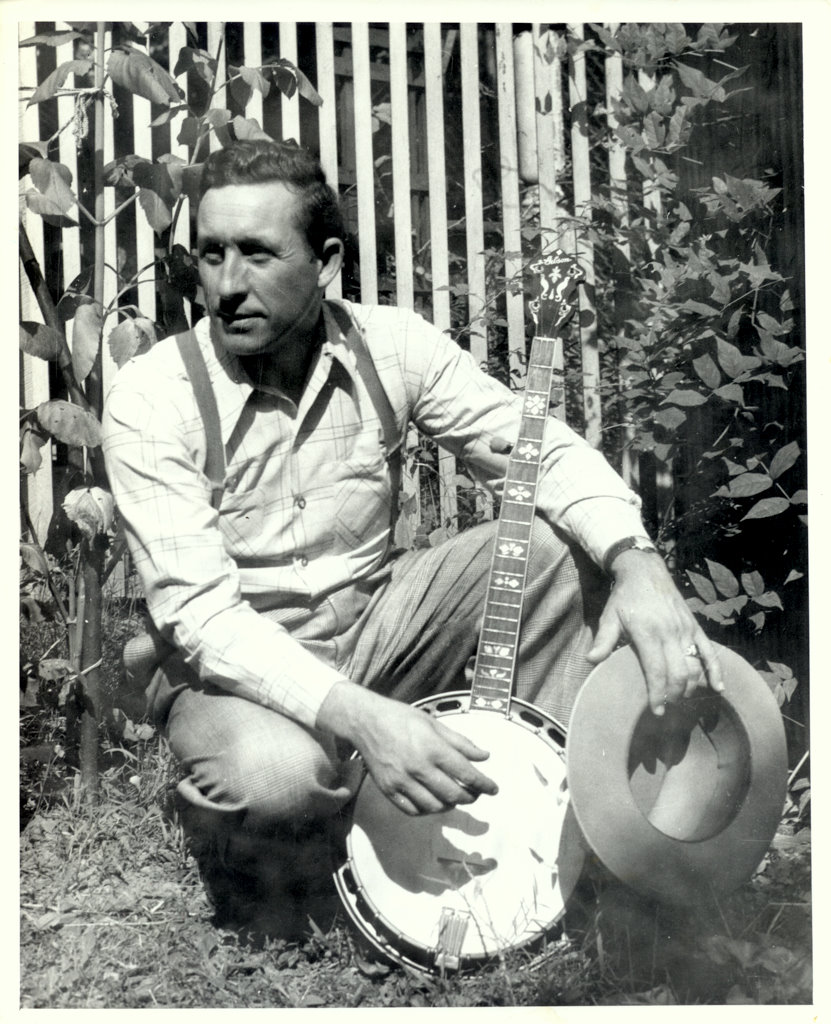 Country music lost one of it’s greatest practicioners this week when Wade Mainer passed away at the age of 104. Mainer developed a two-finger banjo style using finger picks, playing leads and melodic lines on the instrument previously used primarily as rhythm accompaniment. Beyond his musical abilities, Mainer long held a reputation as a skilled entertainer, generous mentor, and gracious to his fans.
The Southern Folklife Collection is the repository of many materials related to Wade Mainer, including a 1980 interview by David Holt, call no. FS-10717 in the David Holt Collection, research and recordings in the Bob Carlin Collection, as well as interviews, recordings and radio programs featuring Mainer produced by Paul Brown in the Paul Brown Collection.  We were honored to host a program and tribute to celebrate the publication of Mainer’s biography last year, the excellent Banjo on the Mountain: Wade Mainer’s first 100 years, by Dick Spottswood. The SFC also holds many of Wade Mainer’s commercially released recordings.  His career spanned most of the history of recorded music, a sonic record of his of his immeasurable influence on country, bluegrass and American music.
For an all to brief history of Mainer’s early career, we turn to music scholar and friend of Wade Mainer, Dick Spottswood, who wrote a touching obituary for his friend.  Read the whole piece at WAMU’s BluegrassCountry.org:

“Wade was one of the most remarkable musicians of his era.  With his fiddling brother J.E. (1898-1971), Wade played music informally with and for fellow cotton mill workers in Concord, North Carolina starting in the 1920s.  When they played over WSOC in Gastonia in 1932, the Mainers began a new career that would eventually allow them to become full time musicians, performing at night by gaslight in rural schools and getting up in time for 5 and 6 AM daily radio shows designed for working farmers to enjoy at breakfast before heading out for the fields.  They graduated to WBT (Charlotte) in 1934, becoming Mainers’ Mountaineers when they were sponsored by Crazy Water Crystals, a Texas mineral water-derived concoction that hosted live country music from Oklahoma(Bob Wills) to Halifax (Hank Snow).  The brothers split up in 1936 when J.E. elected to stay with Crazy Water and Wade chose to move on, calling his new outfit Wade Mainer and Sons of the Mountaineers.  In 1937 he wed Julia Mae Brown of Mocksville, who had performed on radio herself as “Hillbilly Lily.”

Before World War II, Wade, along with band members Zeke Morris, Steve Ledford, and Clyde Moody worked at ten more stations from Danville to New Orleans, and recorded more than a hundred titles for RCA Bluebird, including versions of Little Maggie, Little Birdie, Maple on the Hill, Old Reuben, Wild Bill Jones, John Henry, Down in the Willow Garden, On a Cold Winter’s Night (The Wreck of Number Nine), and Riding On That Train 45.  The last four were selected by John Lomax for the influential 1941 RCA record album Smoky Mountain Ballads that introduced music from Wade Mainer, Uncle Dave Macon, the Monroe Brothers, Dixon Brothers and Carter Family to folk music fanciers up north.  Wade’s records also sold well in the south, keeping his songs in repertory well into the bluegrass era, and keeping the unique sound of the fiddle and banjo alive all but single handedly until Bill Monroe hired Stringbean (1942) and Earl Scruggs (1945) to complement fiddlers and Bill’s own mandolin.

John’s son Alan Lomax liked Wade’s records too.  He and Librarian of Congress Archibald MacLeish invited the Sons of the Mountaineers for an “Evening of American Folklore,” at the White House on February 17, 1941.  Wade liked to tell about being accidentally hit by a swinging door and spilling a dish of ice cream on Eleanor Roosevelt.  As he related,” I was standing right there and Mrs. Roosevelt went out for something.  And when she came back she pushed the door open and it hit me and it knocked the bowl of ice cream out of my hand and knocked it on her.

“So I run my hand down in my pocket and pulled out a big old red bandana handkerchief, I was going to wipe the ice cream off of her.  She said, ‘No, you just forget about that.’  She disappeared for a few minutes and directly she came back, she had on a different dress and everything.  The concert went on and it was a very lovely evening we had down there with them at the White House.”

Alan Lomax then went to Asheville, where Wade and the band were broadcasting daily from WWNC.  With staff announcer Marty Lyles, they recorded a simulated broadcast that concentrated on traditional material.  In the fall, famed Life magazine photographer Eric Schaal went toVirginia,Tennessee and North Carolina to document Wade, the Carter Family and Bascom Lamar Lunsford for an article on country music, scheduled for the second week in December 1941.  ButAmerica entered World War II that week, and the photo essay never appeared.

On November 19, 1941, Wade received a telegram from WSM’s George D. Hay inviting the Sons of the Mountaineers to the Grand Ole Opry inNashville.  At the time they were the featured band on the Mid-Day Merry-Go-Round on WNOX inKnoxville.  Producer Lowell Blanchard had the band under contract, and, after initially agreeing to let Wade go, held him to the contract’s terms. Wade never got to play the Opry until 2002, when he was hosted by Bill Anderson and Eddie Stubbs.”

Wade stepped back from music in the 1950s and relocated to Flint, Michigan, preferring to raise his family with a steady paycheck from General Motors. After his children were grown, however, he picked up the banjo again, performing with his wife Julia to new generations of fans and receiving the National Heritage Award in 1987.
We’ll share some more Wade Mainer material next week, but take a moment and remember one of America’s greatest musicians. Paul Brown wrote and recorded an obituary for NPR and William Grimes wrote for the New York Times.