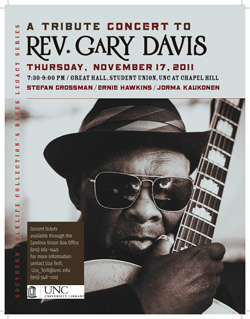 Rock and Roll Hall of Fame inductee Jorma Kaukonen will headline a Nov. 17 tribute concert and symposium in honor of blues legend Reverend Gary Davis. Schedule and information follows at the end of this post.
The Southern Folklife Collection and the Friends of the Library will sponsor the evening devoted to the master of finger-style guitar who influenced musicians such as Blind Boy Fuller, Taj Mahal, and Bob Dylan.
The 7:30pm concert will feature musicians who studied with Davis or were directly inspired by him, including Hot Tuna and former Jefferson Airplane member Jorma Kaukonen, Stefan Grossman, and Ernie Hawkins. Tickets to the concert can be purchased from the Carolina Union Box Office.
Prior to the concert, a free public symposium will take place in Wilson Library. At 5:30 p.m., blues scholar Elijah Wald will give a keynote lecture on Davis’s life and music. A panel discussion at 6:30 will include Kaukonen, Grossman, and Hawkins.
Wald, a musician and writer, has written for The Boston Globe and the Los Angeles Times, and his books include How the Beatles Destroyed Rock ‘n’ Roll: An Alternative History of American Popular Music (Oxford University Press, 2009), The Blues: A Very Short Introduction (Oxford University Press, 2010), and Escaping the Delta: Robert Johnson and the Invention of the Blues (Amistad, 2004). In 2001, he won a Grammy award for his liner notes for The Arhoolie Records 40th Anniversary Collection: The Journey of Chris Strachwitz 1960-2000.
The concert is the second event in the Southern Folklife Collection’s Blues Legacy Series. A third event is planned for Feb. 2012 for Eddie James “Son” House.
Davis was born in 1896 in Laurens, S.C., and lost his vision before adulthood. He moved to Durham, N.C., in the 1920s, and worked with a number of musicians in the Piedmont blues scene. In 1933, he became an ordained minister of the Washington, N.C., Free Baptist Connection Church. His best-known songs include “Baby, Can I follow You Down,” “Candy Man,” and “Samson and Delilah.”
The Southern Folklife Collection is fortunate to hold a variety of recordings and materials related to Rev. Gary Davis, including FT-4600 from the Bob Carlin Collection (#20050).  This open reel audio tape features a young Carlin interviewing one mentor (and former camp counselor) Roy Book Binder, a friend, student, and chauffeur of Gary Davis. The interview includes live concert recordings of Davis and Book Binder offering contextual information and sharing his personal experiences with Davis.