North Carolina master fiddler and musician Joe Thompson passed away on Monday morning, 20 Feburary 2012, at the age of 93. A recipient of both the North Carolina Folk Heritage Award in 1991 and the National Endowment of the Arts Heritage Fellowship in 2007, Joe and his first cousin Odell Thompson performed their own unique style of fiddle and banjo old-time music across the Piedmont throughout most of the 20th century and beyond. It should come as no surprise that the music of Joe and Odell Thompson is well represented at the Southern Folklife Collection, including field recordings, CDs, documentary video, photos and more. We hope to share some of these materials with you in remembrance of Joe Thompson and to demonstrate the impact he had on the history and legacy of stringband music in North Carolina.

Born and raised just north of Mebane in 1918, Joe Thompson learned fiddle and old-time tunes from his father and uncle, Walter and John Arch Thompson. Joe, his brother Nate, and cousin Odell quickly became sought after performers for Saturday night dances for both white and black audiences. Even as interest for old-time stringband music waned in the decades after WWII, the Thompsons continued to play the songs they grew up with. Joe recorded many of these tunes for his 1999 release on Rounder Records, Family Tradition. 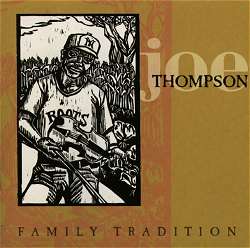 In the early 1970s, folklorists like Kip Lornell and students of folklore at UNC began documenting the music of Joe and Odell Thompson, and also encouraging them to perform publicly again. The photo at the top of this post, call no. P4705 from the Tommy Thompson Collection (#20359), [UPDATE: Photo by Nancy Kalow, taken in 1988 as part of a project on North Carolina fiddlers with Wayne Martin], accompanies numerous field recordings made by Thompson and noted Appalachian banjo and African American music scholar CeCe Conway. Until Odell’s death in 1994, the duo performed at folk festivals across the country, exposing new audiences to the rich tradition of African-American stringband music many never even knew existed. The following video of Joe and Odell, call no. v8m-138 in the Nancy Kalow Collection (#20113), was shot at a 1988 concert in Gerrard Hall at UNC Chapel Hill.

Joe Thompson continued to perform and record throughout the 1990s and 2000s, but perhaps most importantly, he graciously shared his music and skills with members of younger generations looking to learn. The Carolina Chocolate Drops became Thompson’s most well known protégés, learning from him at his home in Mebane and eventually recording and performing with him at festivals like Merlefest and even local dances. The video below comes from DVD-130, part of the Dom Flemons Collection (#20427). Please enjoy and feel free to share your memories of Joe Thompson in the comments below.