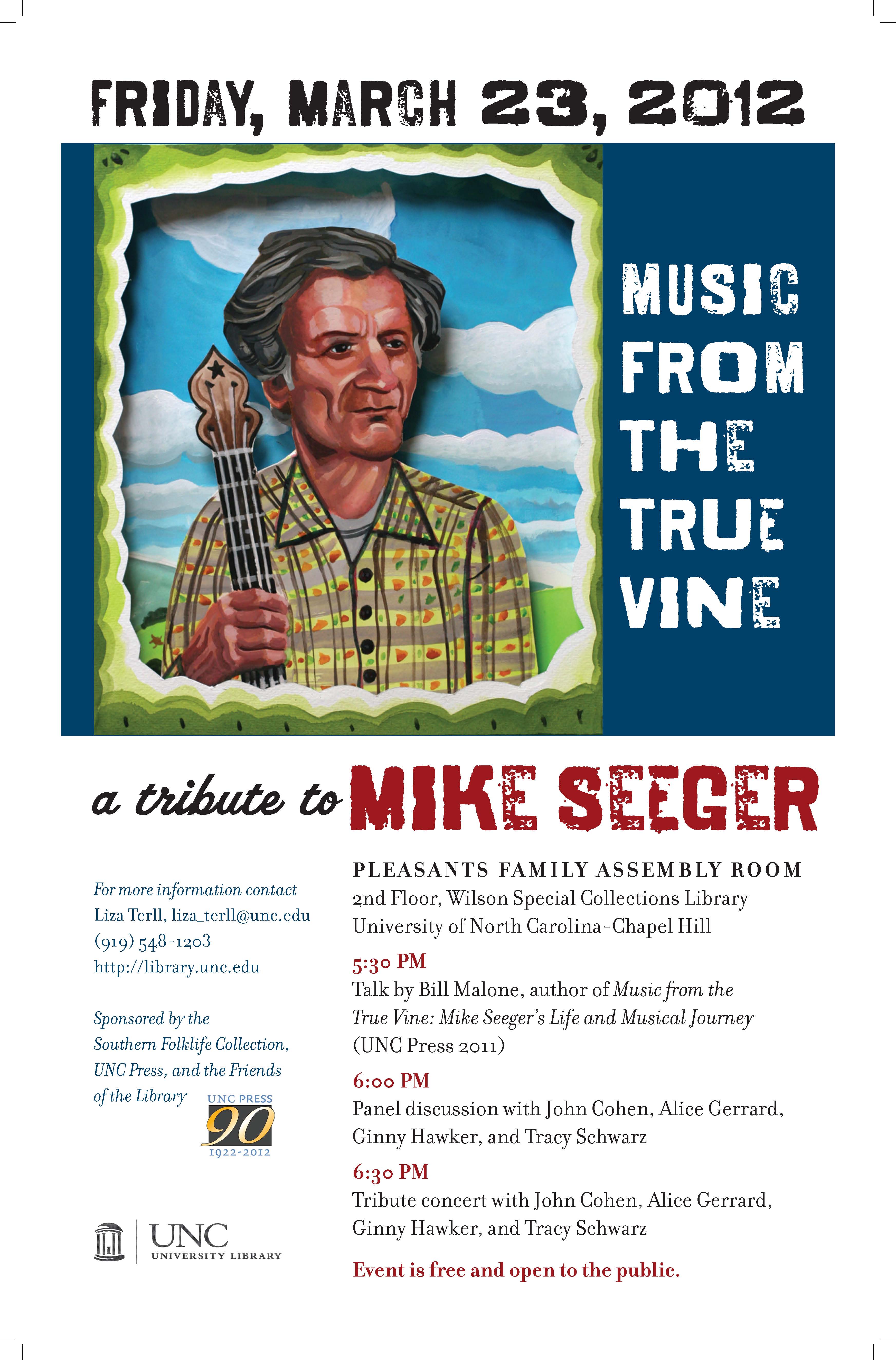 The life of the late musician, documentarian, and scholar Mike Seeger will be celebrated with a tribute concert and lecture at the Wilson Special Collections Libraryon March 23, 2012.
Seeger, co-founder of the folk revival group the New Lost City Ramblers, died in 2009. He was a member of the famous Seeger folk family, along with musician siblings Pete and Peggy Seeger and their musicologist parents Charles and Ruth Crawford Seeger.
The 6:30 p.m. concert will feature musicians who performed with or were influenced by Seeger: John Cohen (a co-founder of the Ramblers), Alice Gerrard, Ginny Hawker, andTracy Schwarz.
Prior to the concert, historian and author Bill C. Malone will give a 5:30 p.m. lecture on his new biography, Music from the True Vine: Mike Seeger’s Life & Musical Journey (UNC Press, 2011). At 6 p.m., Malone will moderate a panel discussion with the concert performers.
Malone, an emeritus professor of history at Tulane University, is known for his studies of Southern folk and country music. Music from the True Vine presents Seeger as a gatekeeper of American roots music and culture, showing why generations of musicians and fans of traditional music regard him as a mentor and an inspiration.
Seeger recorded almost forty albums and was nominated for six Grammy Awards, including three for solo work. He also interviewed and produced field recordings of traditional musicians. The National Endowment for the Arts honored him with a National Heritage Fellowshipin 2009.
The program is sponsored by the Southern Folklife Collection in Wilson Library, which holds the collected papers of Mike Seeger, as well as those of Gerrard and Malone. The Friends of the Library and UNC Press are program co-sponsors.
Books will be available for sale and signing, courtesy of the Bull’s Head Bookshop.
Please join us.
Friday, March 23, 2012
Wilson Special Collections Library, Pleasants Family Assembly Room
5:30 p.m. Lecture by Bill C. Malone
6 p.m. Panel discussion with Bill C. Malone, John Cohen, Alice Gerrard, Ginny Hawker, and Tracy Schwarz
6:30 p.m. Concert featuring John Cohen, Alice Gerrard, Ginny Hawker, and Tracy Schwarz
Free and open to the public
Information: Liza Terll, Friends of the Library, (919) 548-1203