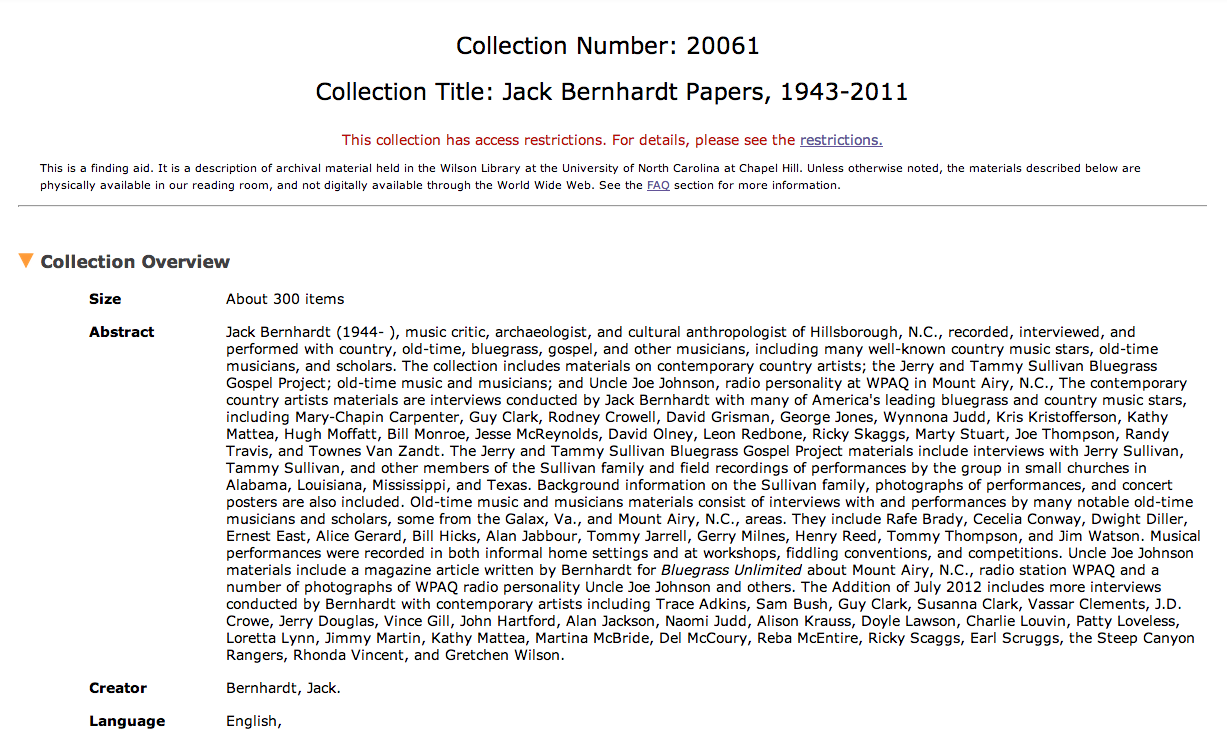 When Southern Folklife Collection curator, Steve Weiss, suggested we highlight the Jack Bernhardt Papers (20061) on Field Trip South I happily offered to write the post. I’m not proud to say that conversation was over two months ago. Every time I began to research the collection, I fell down one rabbit hole after another. Should the focus be on the in-depth fieldwork and oral histories with regional gospel bluegrass band Jimmy and Tammy Sullivan?  Or Bernhardt’s excellent documentation of old-time music, with a list of recordings that include performances and interviews with some of Appalachia’s most remarkable musicians and folklorists recorded in the 1980s: Alice Gerrard, Andy Cahan, Matokie Slaughter, Ernest East, Cece Conway, Rafe Brady, Alan Jabbour, Tommy Thompson, Bill Hicks, Nimrod Workman and more. Bernhardt collected hours of interviews and recorded hours of vibrant musical performances, including many informal jam sessions, taking the listener directly into the living room of North Carolina’s legendary musicians like Tommy Jarrell and Bertie Dickens. Each of these recordings deserves consideration, and we welcome you to visit Wilson Library to listen, however it’s Bernhardt’s collection of interviews largely made in his role as critic of contemporary country music that I have been most drawn to.

We’ll start with The First Lady of Country Music, the legendary Loretta Lynn.

Bernhardt’s interview of Lynn, call number FS-12132, was conducted on 20 April 2001. Bernhardt is a warm conversationalist, however he is also a pointed and professional interviewer, asking pointed and probing questions touching on the broad scope of Lynn’s life and career.  The pair kick off the interview with a frank discussion about politics and reflections on the beginnings of the Iraq War, sounding like two old friends meeting over coffee before switching over to music.

Listen as Lynn surveys American country music, frustrated with the industry push to either “go back to sitting on hay bales” or going all out pop:

Later, Lynn’s ever-present charm and humble appreciation is on full display when describing one of her most memorable moments receiving an achievement award in Washington D. C. in the late 1980s.  Ed Asner was the MC.

Bernhardt’s questions inspire Lynn to reflect on the her early recording career, touching on the sexism and chauvinism of the Nashville scene and Lynn’s opposition to it from the start:

We’ll leave you with a great soundbite of Lynn talking about her role as a pioneer artist, paving the way for women in country music. Recounting an interview her daughter gave where the younger Lynn exclaimed “Momma didn’t open the doors, she kicked them down!”

Check back in with Field Trip South for more from the Jack Bernhardt Papers including interviews with John Hartford, Townes van Zandt, and Gordon Stoker from the Jordanaires.