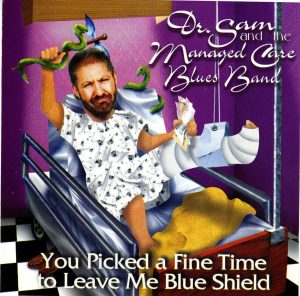 “Dr. Sam” is known in real life as Samuel Bierstock, MD, a practicing physician in Boca Raton, Florida. Since 1996, he has been writing songs on themes of illness, hospital stays, and HMOs, performing and recording them with his blues band in which he sings and plays harmonica. Bierstock and his band have been featured in People Magazine, USA Today and on CNN; they have also mailed their CDs to politicians across the U.S. (including former President Clinton) in order to raise awareness of issues in patient care. The themes tackled by the band are as relevant today as they were in 1990s.

Although, according to the DSATMCBB website, the band’s CDs have been distributed to every member in Congress, the SFC is the only collection listed in Worldcat with copies. In fact, the SFC also appears to be the only repository with  holdings in the subject area of “Managed care plans (Medical care) – Songs and music.”
In the track “No Overnight Blues” Dr. Sam sings of a new mother whose insurance company will not pay for an overnight hospital stay.
“No Overnight Blues,” Dr. Sam and the Managed Care Blues Band 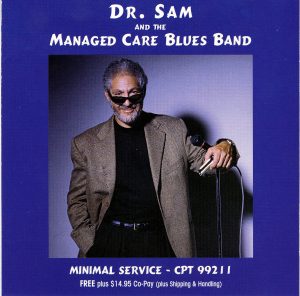