With the Wilson Library live action Clue Game happening tonight and All Hallow’s Eve tomorrow, it’s no surprise that strange phenomena have been occuring in the Southern Folklife Collection studios. Just this morning, preservation audio engineer Brian Paulson digitized the Goldband Records master tape of Satan and the Deciples, call no. FT6891 in the Goldband Recording Corporation Collection (20245), as part of our current digitization project, From the Piedmont to the Swamplands: Preserving Southern Traditional Music. 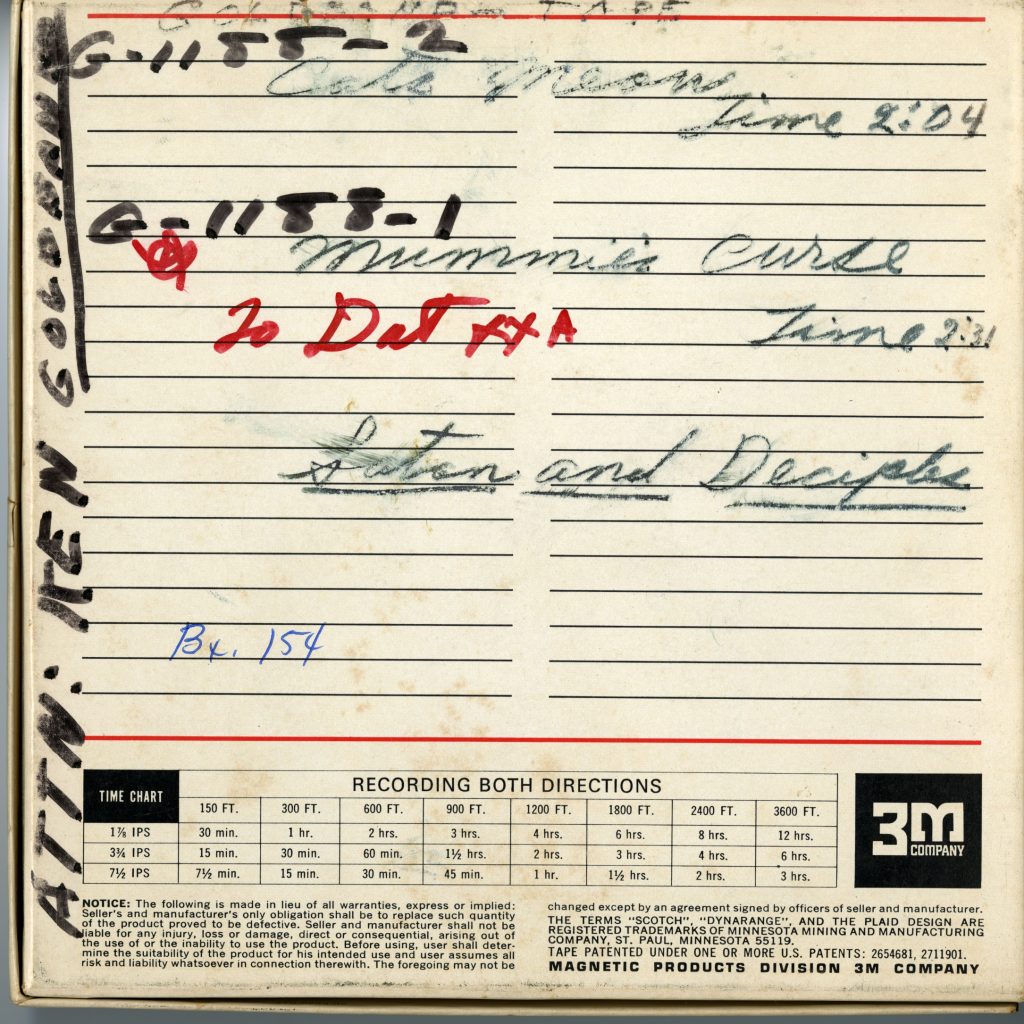 Brian arrived to work this morning, having left the Rivers Studio in proper order when he left last night, to find this open reel tape spooled on the Otari ready for playback. No one knows how the tape got from the stacks to the studio or what could have loaded the tape onto the machine. Not one to question the will and ways of the supernatural, of course Brian played the tape, reavealing the following horrifying song, “Mummie’s Curse.”FT6891_ Satan and Deciples_Mummie’s Curse_Goldband Recording Corporation Collection (20245)_Southern Folklife CollectionNot much is known about Satan and the Deciples (aka Satan and Satin’s Roses, aka Satin and the Deciples). The theory we agreed upon in the Rivers Studio accepts that the band rose out of the swamps around Lake Charles, called from eternal slumber to terrorize the honky-tonks of East Texas like so many of the undead. Other more likely theories suggest the band was a novelty project made up of a crew of local bar band musicians that liked scary movies. Considering the Deciples featured one Baldemar Huerta (aka Freddy Fender who co-wrote both tracks on this tape) on lead guitar, the latter theory is more plausible. We may never know the truth, but we were inspired to pull out Jason Lonon’s poster for a “Halloween Ho-down” (featured above) to share with you fine readers, call no. OP-20451/16 from the Jason Lonon Poster Collection (20451).
Happy Halloween.