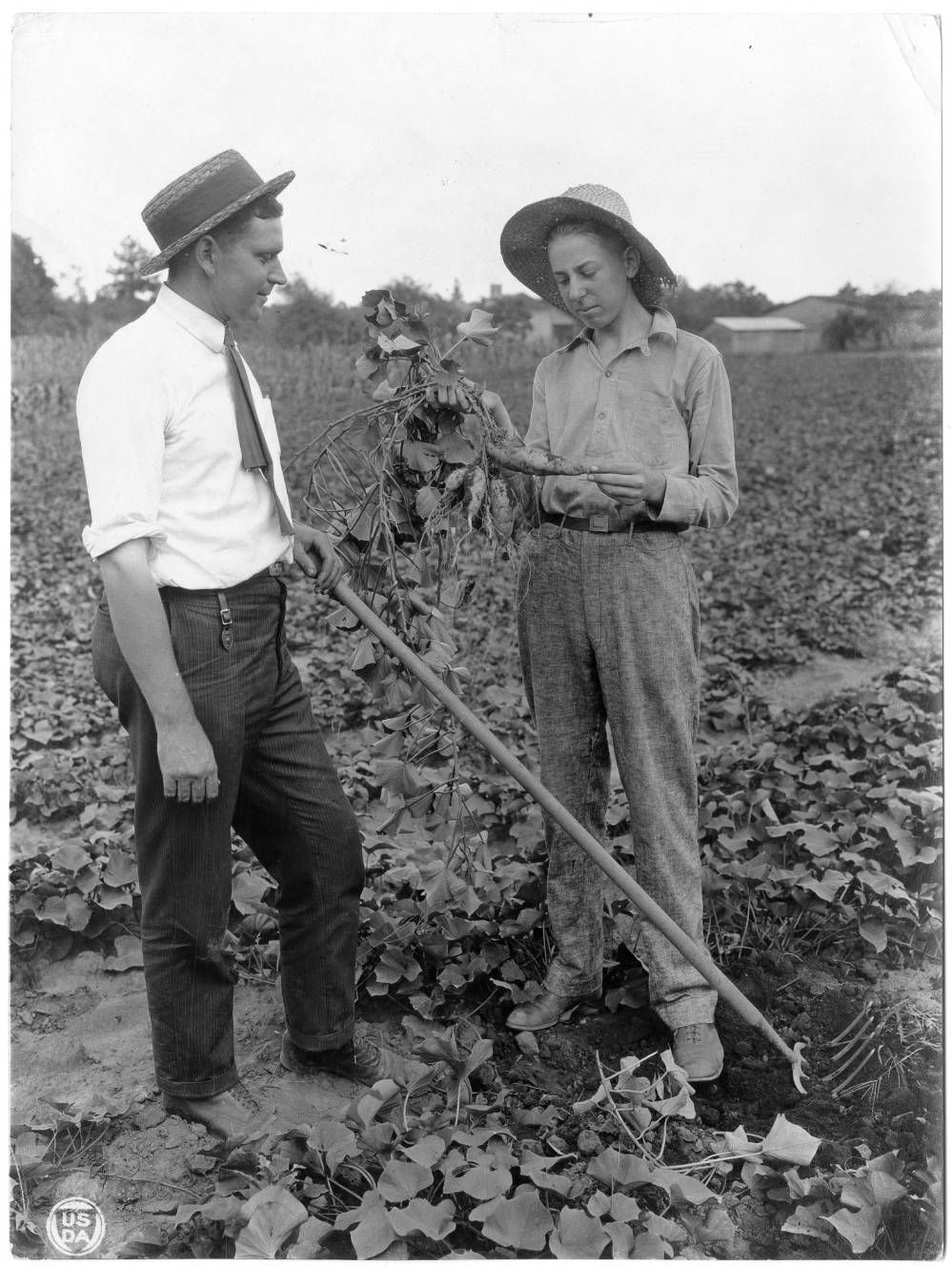 Don’t forget your eat your sweet potatoes tomorrow. No matter whether you roast them, bake them, fry them, hasselback them, or cook them with marshmallows on top, the Southern Folklife Collection has your soundtrack covered thanks to a seasonally appropriate tape from the Goldband Recording Corporation Collection (20245) that came up in the Rivers Studio just this week.

William Parker Guidry, Jr., came up in Southwest Louisiana and Lake Charles, performing and recording as Bill Parker for a number of labels, including Eddie Shuler’s Goldband Records. A drummer and bandleader, he appears all over the Goldband discography, and the man must have been a huge fan of the sweet potato because he wrote and recorded at least two tunes, including a cha-cha, dedicated to the noble tuber.
For you dear readers and listeners, we have “Sweet Potato Mash” by Bill Parker and his Showboat Band. FT7003 was digitized as part of the Southern Folklife Collection digitization project, From the Piedmont to the Swamplands: Preserving Southern Traditional Music, funded by a grant from the National Endowment for the Humanities. 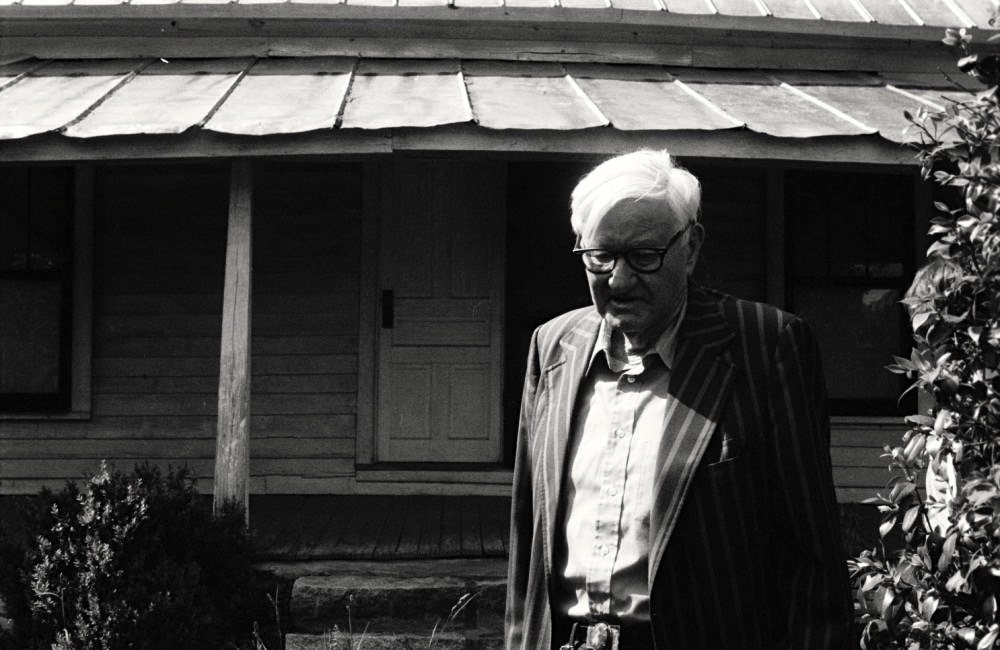 Back in 2009 we wrote about a field recording, call no. FS8341 from the Alice Gerrard Collection, documenting the Christmas she and Andy Cahan spent with Tommy Jarrell and his daughter Dena in 1983. For those who are interested, they had chicken and “it was so fine.”
That’s not the only holiday recording in the Alice Gerrard Collection. FS8205 was made in 1981 when Alice and a few others, including old-time musician Rusty Neithammer, spent Thanksgiving with Tommy. They had ham, and also some corn, according to the tape.FS8205_Ham
How many other holiday menus and recipes were recorded in the process of doing field work that are now held in Wilson Library at UNC? These recordings and thousands more are available for research in the Southern Folklife Collection. There was quite a bit of music at that Thanksgiving celebration, listen to Jarrell’s solo banjo version of “Let Me Fall” and then Rusty Neithammer and Tommy Jarrell twin fiddle one of my favorites, “Rockingham Cindy.”FS8205_Let Me Fall_BanjoFS8205_Rockingham Cindy
The Southern Folklife Collection is thankful to be able to share this with all of you out there. Happy Thanksgiving.

We were saddened to learn that Harper Van Hoy passed away this week at the age of 92. Harper Van Hoy and his wife Wanona founded the Fiddler’s Grove, an old-time-music and family-oriented campground, which hosts traditional music and dance events throughout the year in Union Grove, NC. The Ole Time Fiddler’s & Bluegrass Festival, a fiddling competition, has been held annually in the spring since Fiddler’s Grove’s founding in 1970, and the Square-Up, a clogging competition was held in the fall until 1982. The fiddling festival, however, traces its history in Union Grove to 1924 when Harper Van Hoy’s father, H. P. Van Hoy, founded the Old Time Fiddlers Convention as a school fundraiser. To learn more about the history of Fiddler’s Grove and the Van Hoy’s legacy in Iredell County, NC, see the Southern Folklife Collection online exhibit Fiddler’s Grove: Retrospective 1977-2000. Items include photos of each year’s “Fiddler of the Festival,” including Ann Warren (1977) and Billy C. Hurt, Jr. (1987) below [photos by Ann Hawthorne], as well as fliers, winner’s lists, and other ephemera, like the 1971 poster featuring Doc and Merle Watson [click images to enlarge]. 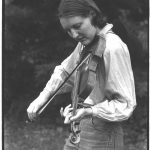 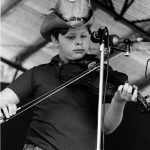 The Fiddler’s Grove Collection (20016) provides an overview of the history and operation of Fiddler’s Grove, and its main entertainment events, the Ole Time Fiddler’s & Bluegrass Festival and the Square-Up. The work of Harper Van Hoy and Wanona Van Hoy in building the reputation of Fiddler’s Grove as a gathering place for old-time music and family entertainment is documented throughout the collection. Also documented is the split between Harper Van Hoy and his brother, J. Pierce Van Hoy, which resulted in two competing Van Hoy-operated spring fiddling events in Union Grove, 1970-1979. General correspondence, newspaper clippings, promotional material, and other items go back to the founding of the Old Time Fiddlers Convention. Festival materials include participation registration information, lists of winners, judges’ notes, and correspondence, and other items. Also included are open-reel tapes, an eight-track tape, compact discs, and a videotape, all of which relate to the Ole Time Fiddler’s & Bluegrass Festival.
Harper Van Hoy, like his father H. P., was also a fine fiddler himself. Listen to him play “Soldier’s Joy” along with The Bluegrass Gentleman, recorded at the inaugural festival in 1970 and released as part of the excellent LP, Fiddler’s Festival 1970, Southern Folklife Collection call no. FC-787. Harper_Van_Hoy_Soldier_Joy_FC787_Southern Folklife Collection 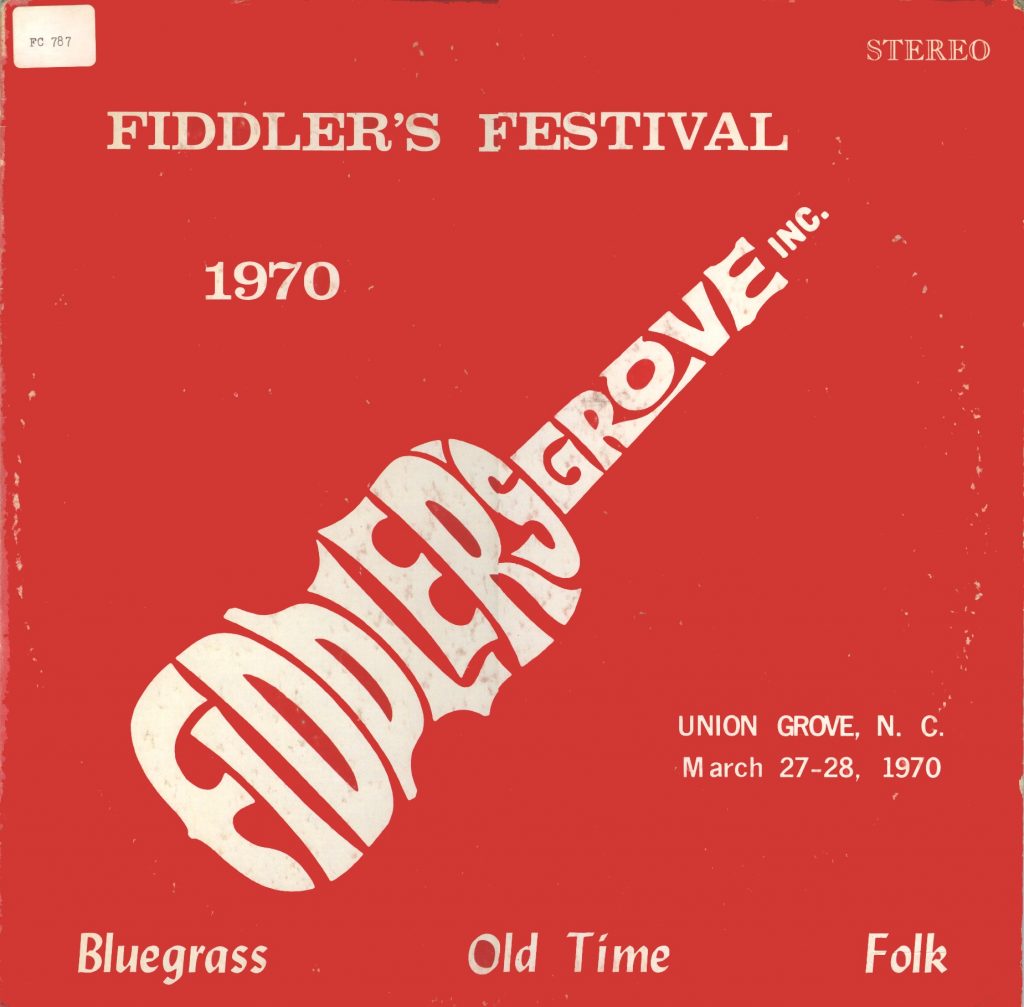 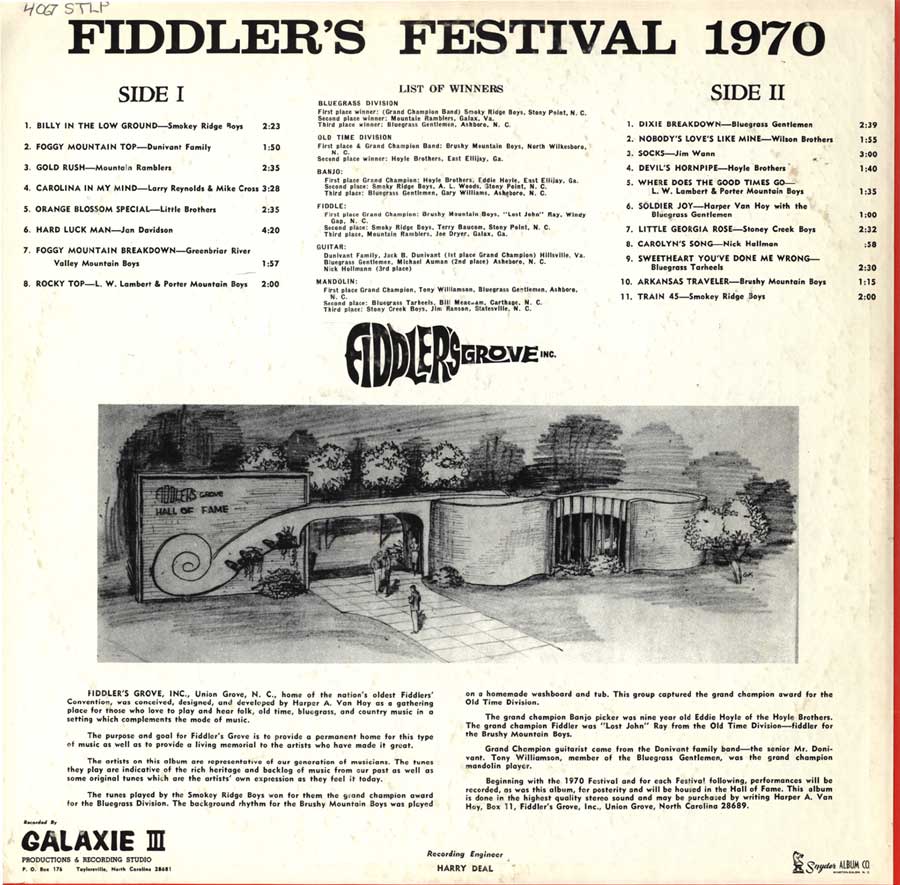 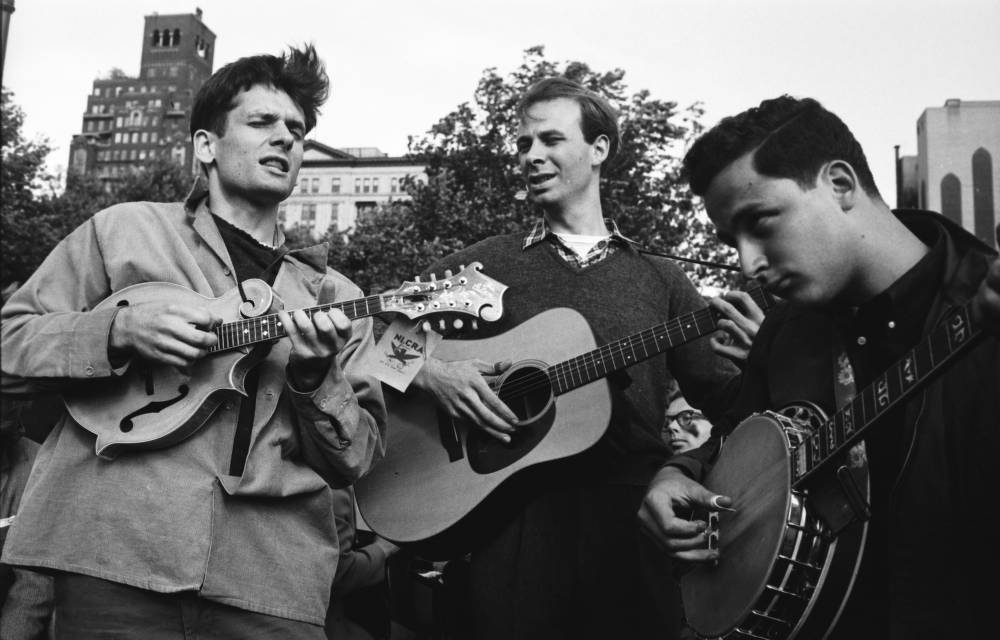 Wilson Library has a new Tumblr!  To christen the site, the Southern Folklife Collection kicked off a weekly feature highlighting images from the Photo-Sound Associates photographs in the Ron Cohen Collection (20239). The Photo-Sound Associates photographs are black-and-white 35mm roll film negatives, documenting the folk revival movement in and around New York City that were taken by Aaron Rennert and Ray Sullivan. Photo-Sound Associates was organized by Rennert, Sullivan, and Joel Katz in Greenwich Village in connection with Lee Hoffman and Caravan magazine. Rennert and Sullivan did the photography, while Katz recorded the concerts. Bonus image, 20239_pf0090_01_0006, below. You didn’t need a banjo to join in at Washington Square Park. One string fiddle!  For more images, see the Ron Cohen Collection (20239). 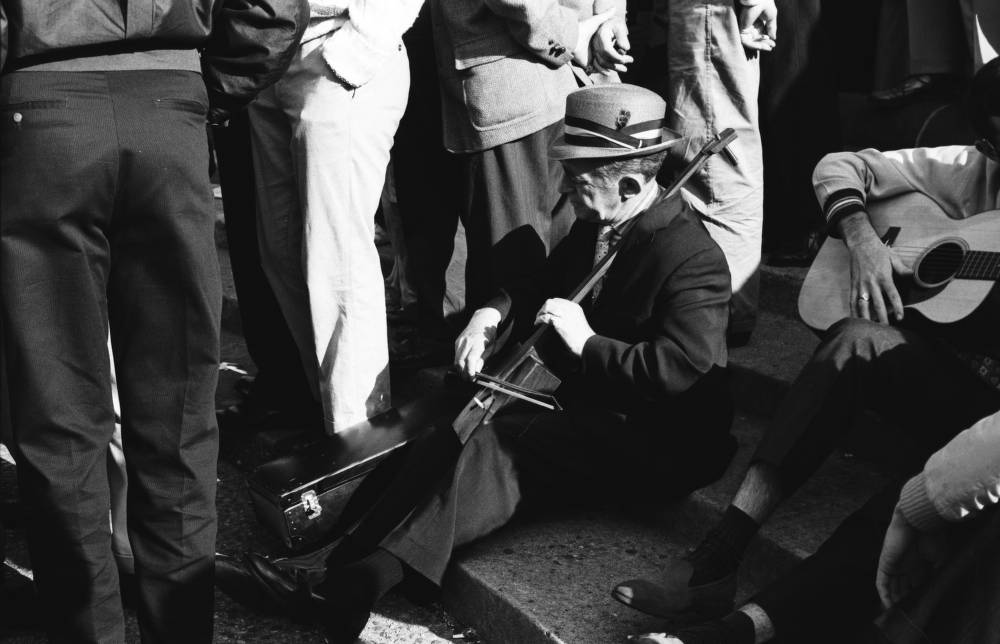 Two tracks this week from the Goldband Recording Corporation Collection (20245). These tapes were preserved in the Rivers Studio as part of a current Southern Folklife Collection digitization project, From the Piedmont to the Swamplands: Preserving Southern Traditional Music, funded by a grant from the National Endowment for the Humanities.
First, from FT6770, the great guitarist Danny James (née Danny James Sonnier). A skilled session player, James had a productive solo career as well, his signiture guitar tone sliding through swamp blues and boogie. Instrumentals like “Switchit,” showcase James backed by a solid southern soul ensemble, including horns. FT6770_GBR_Danny James_Switchhit

Another treat in the studio last week was a tape by Cajun fiddler J. B. Fuselier and his Merrymakers. Fuselier was a popular and innovative musician, recording a number of popular Cajun hits in the 1930s and 1940s, adding drums and steel guitar to his traditional Cajun ensemble. After WWII, Fuselier joined with Iry LeJune and the Calcasieu Playboys and the two ruled the dance hall circuit until 1955 when LeJune was killed and Fuselier severely injured when hit by a car while changing a tire at night on a dangerous South Louisiana highway. Despite his injuries, Fuselier never stopped playing and recorded a number of sides for Goldband in the 1960s, including “Think of Me,” from FT6857. We love the steel guitar and accordion arrangement, and Fuselier’s lonsome vocals make this a Cajun honkytonk heartbreaker perfect for Monday morning. FT6857_GBR_20245_J.B. Fuselier_Think of Me 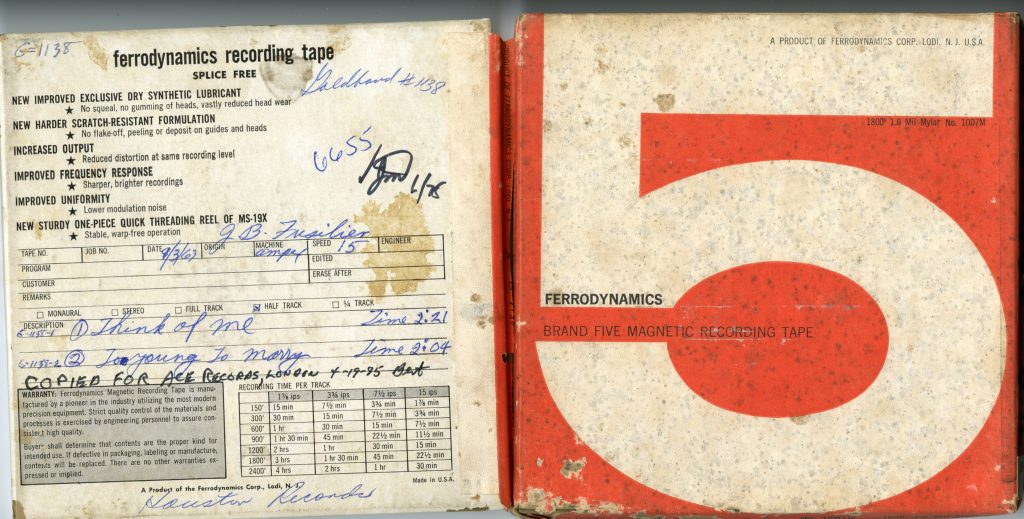