During a recent cataloging session, we stumbled across this 1953 EP by composer/performer/inventor/poet/philosopher Moondog (born Louis Thomas Hardin, b.1916-d.1999), hidden in between recordings by Dizzy Dean & his Country Cousins and the Circuit Rider Quartet. 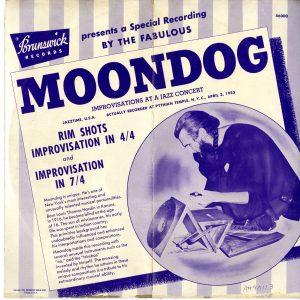 Moondog grew up in the Midwest and became blind at age 16 after playing with a dynamite cap. In the 1940s, he moved to New York City, renamed himself after an ex-pet (a dog who liked to wail at the moon), and stationed himself on a Times Square traffic median where he played his own compositions on instruments that he’d designed and built. Some time during the 1950s, increasing crowds at his performances drove him to relocate to a quieter spot near the corner of 53rd Street and 6th Avenue—and to switch from playing music to standing still for eight hours a day, sometimes reading and selling his poetry. He typically carried a spear, wore a Viking helmet, long beard, and a robe he made from pieces of army blankets. (In 1965, the New York Times reported that he’d changed to a green velvet outfit in order to avoid the “G.I. connotations” of the army blankets).
In the meantime, Moondog also recorded a number of albums for Decca, Prestige, and Columbia and gained recognition as a serious avant-garde composer. Improvisations at a Jazz Concert is the only Moondog record on the Brunswick label. It features two of his self-made, self-designed instruments—the oo (a sort of miniature dulcimer) and the trimba (two small triangular drums with a cymbal attached), as well as his characteristically elastic approach to tempo and meter that he sometimes referred to as “snake time.” Billboard magazine called the EP “one of the unusual recordings of the year” when it came out in 1953, the reviewer suggesting that “those who react to rhythm should be intrigued.”
We’ve included here an excerpt from Side 1, entitled “Improvisation in 7/4.” The EP is available at the SFC, call no. 78-16420.
Improvisation in 7/4 Excerpt

A Moondog documentary is soon to be released, the trailer for which is available here: http://thevikingof6thavenue.com/