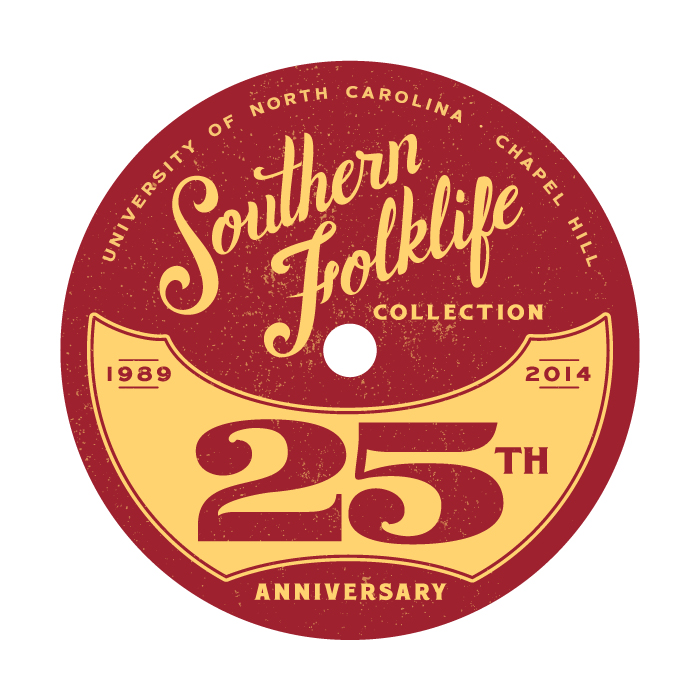 In just over one month, Southern Folklife Collection will celebrate our 25th Anniversary, August 21-August 23. As one of the nation’s foremost archives of Southern vernacular music, art, and culture, available for research in the University’s Wilson Special Collections Library, the Southern Folklife Collection is honored to had the opportunity to serve as an educational resource, an archive dedicated to collecting and preserving cultural heritage, and a focal point for the public appreciation of Southern art forms for 25 years.
Since its opening in 1989, the SFC has grown to contain over half a million items including sound recordings, moving images, photographs, manuscripts, books, song folios, serials, posters and ephemera. The Collection is especially rich in materials documenting old-time, country-western, bluegrass, blues, folk, gospel, rock, Cajun and zydeco music. The SFC holds numerous recordings on the Library of Congress’ National Recording Registry, including Dolly Parton’s first recording “Puppy Love.”
As part of the Southern Folklife Festival, we are presenting a number of events. You can visit our event website, sfc25th.web.unc.edu for more details, and come back to Field Trip South where we’ll highlight the our programs over the coming weeks.
August 21-23 is going to be a really good time to be in Chapel Hill.

We hope you can join us!


Newly cataloged at the SFC (call no. 78-16864) is a 1952 release by the Church Brothers & their Blue Ridge Ramblers, a short-lived ensemble on a short-lived label, both based out of Wilkes County, North Carolina.
The oldest of the three Church Brothers, Bill Church, had played during the 1940s with Roy Hall & his Blue Ridge Entertainers and on a radio show in Asheville, N.C. called “Farm and Fun Time.” After serving in World War II, he and his brother Ralph began playing with cousin Ward Eller and a few other locals—Drake Walsh (son of Dock Walsh), Gar Bowers and Elmer Bowers. Eventually a third Church brother (Edwin) joined the group. Calling themselves the Wilkes County Entertainers, they played on the local radio stations WILX and WKBC and at schoolhouse shows.

By the 1950s they were performing as the Church Brothers and their Blue Ridge Ramblers and making recordings with a lineup featuring Bill Church (guitar), Edwin Church (fiddle), Ralph Church (mandolin), Ward Eller (guitar), Ralph Pennington (bass), and Johnny Nelson (banjo). They also began recording songs written by a local lyricist, Drusilla Adams. Initially the band planned to have these recordings come out on Rich-R-Tone Records (at the time based in Johnson City, TN). Because of various delays, Drusilla and her father decided expedite the process by setting up their own Wilkesboro-based label called Blue Ridge Records, which issued several Church Brothers singles. Blue Ridge Records went on to record the Stanley Brothers and Bill Clifton; the label lasted until 1958 when Noah Adams passed away and it was sold.
The single “No One to Love Me,” featured here, received a somewhat mixed review from Billboard magazine: “A lively performance by the Church Brothers with hoedown accompaniment of a so-so piece of material.” About the B-side, “You’re Still the Rose of my Heart,” the critic simply stated: “More of the same.”
We’ve provided an excerpt from “No One to Love Me” here: here.
In addition to their releases on Blue Ridge, the Church Brothers & their Blue Ridge Ramblers eventually did go on to sign a contract with Rich-R-Tone, recording several tracks for that label. In 1952, the group disbanded—though the members continued to play on their own at various dance events in the Wilkesboro area.
The Church Brothers’ output on Blue Ridge Records and was later released on LP compilations by Gerd Hadeler Productions and Rounder Records. These LPs are also available at the SFC, as FC-4743 and FC-2046, pictured below.

An article and video feature on former Rambler Ward Eller’s experiences with the band appeared in the March 2014 issue of Mountain Music Magazine. 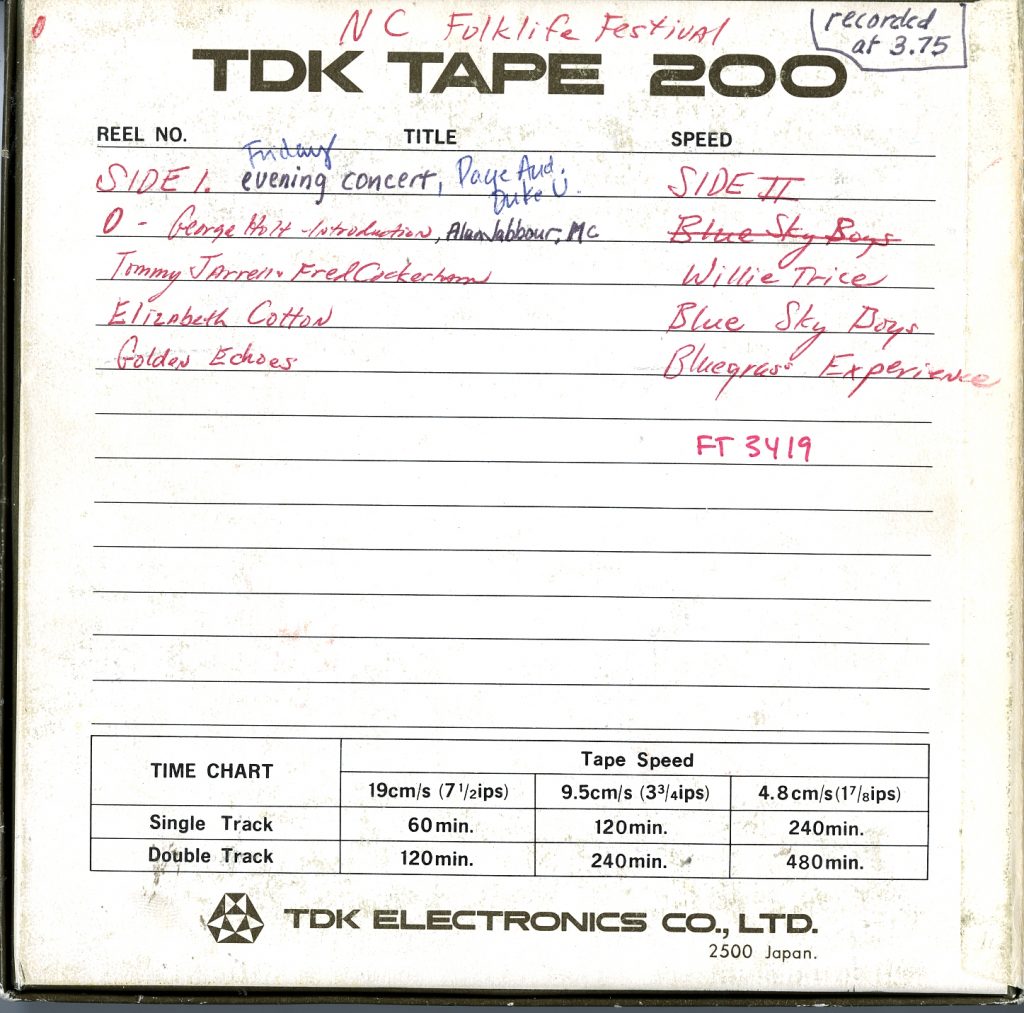 Lovers of North Carolina folklore have a lot to celebrate this year. The Southern Folklife Collection celebrates our 25th Anniversary this year with numerous events August 21 through August 23. See our event website, SFC25, and follow Field Trip South for more information as we lead up to the event. Tickets are on sale now for Memorial Hall concerts featuring the Rebirth Brass Band, Tift Merritt and Merle Haggard. See more information from Carolina Performing Arts.

In other celebratory news, Our good friends at the North Carolina Folklife Institute are kicking off their 40th anniversary commemoration this weekend at the Festival For the Eno. The NCFI has been sharing fantastic photo documentation of the 1974, 1975, and 1976 festivals on their website and Facebook page, highly recommended viewing. They also encouraged us to look back into the SFC for sound recordings of the events, which we located and are in the process of digitizing. Performances from the 1974 festival, organized on the campus of Duke University by George Holt, are documented on open reel tapes FT3418 through FT3421. Performers included Tommy Jarrell and Fred Cockerham, Elizabeth Cotton, The Golden Echoes, Willie Trice, Ernest East, The Blue Sky Boys, The Bluegrass Experience, and many more. We are excited to share some clips of these performances from FT3419 (pictured above) with you and encourage you to visit the NC Folklife Institute table at the Festival for the Eno this coming weekend. Happy Fourth of July!
Introduction from George HoltFT3419_GeorgeHolt
Tommy Jarrell and Fred CockerhamFT3419_TommyJarrell
Golden EchoesFT3419_GoldenEchoes
Willie TriceFT3419_WillieTrice
The Blue Sky BoysFT3419_BlueSkyBoys
The Bluegrass ExperienceFT3419_BluegrassExperience