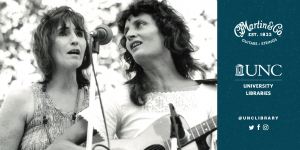 Won’t You Come and Sing for Me? The Music of Hazel Dickens & Alice Gerrard

Hazel Dickens and Alice Gerrard, often described as “pioneering women of bluegrass,” are two of the most iconic and visible women in the bluegrass music community. Their first album released in 1965 is considered the first women duet-led bluegrass recording and as a duo they recorded three more albums and toured extensively throughout the 1960s and 1970s. They performed at festivals such as the Newport Folk Festival, Smithsonian Folk Festival and Bill Monroe’s Bean Blossom Festival and regularly participated in the Southern Folk Cultural Revival Project where they toured with artists such as Elizabeth Cotten, Dock Boggs, Ola Belle Reed, Johnny Shines, and many others. In 2017 they were the first women to be inducted into the International Bluegrass Music Association Hall of Fame. But even with musicians as visible as Hazel and Alice, there are so many details that go unnoticed.

The standard Hazel and Alice narrative focuses on their powerful harmony singing and repertoire choice. What isn’t recognized as much is their instrumental performances, attention to detail in song arrangements and overall artistry. On their professional recordings, you hear a selected and curated outcome of both traditional and original material, mostly in the context of a full band. Their last album has some more stripped down duo arrangements, but listening to this live performance of Hazel and Alice from 1973 shows another side of the duo. This concert recording of just the two of them demonstrates the versatility of their musicianship. Throughout the performance, you can hear Gerrard playing lead guitar, lead banjo, and lead autoharp in addition to both Alice and Hazel being featured as solo vocalists.

Hearing their stage banter and tuning on stage also gives a more intimate perspective on the duo. Sometimes you can hear Dickens say “too fast” at the beginning of a song as they adjust their speed during the performance. Other times you can hear the two of them moving around, deciding where to stand and how close to the mic to get. Other times, you can even hear them reminding each other how a tune starts or what the next verse of a song is. Dickens does most of the talking as she shares stories about her family, touring anecdotes and the backgrounds of the songs. Meanwhile, Gerrard tunes the various instruments that she plays and adds in commentary, only introducing a few of the songs such as her banjo feature “Fortune.”

While Gerrard tunes the banjo in between the songs “Train on the Island” and “Steals of the White Man,” Dickens talks about changing their song choices when they started doing the Southern Folk Festival (https://finding-aids.lib.unc.edu/20004/). She adds, “I don’t want to say ‘repertoire’, that’s too uptown” and laughs. The tours couldn’t afford to pay for the full band, so they rearranged their material as a duo and added new repertoire (I know, too uptown). You can hear some of the practicing recordings of Hazel and Alice working on these arrangements on the 2018 release ‘Hazel Dickens & Alice Gerrard – Sing Me Back Home: The DC Tapes, 1965-1969’s.

Some of the stage banter is humorous, such as Dickens’ story about her father who used to play banjo. She talks about how he would play square dances, barn raisings, apple butter makings, and many other events but stopped once he “got religion.” When Dickens and her brother encouraged their father to play the banjo again by getting him a new instrument, she says, “he got up in the middle of the night one night and destroyed it.”

Dickens and Gerrard also include anecdotes about their song choices. For example, before singing “Steals of a White Man,” Dickens talks about the influence of the Southern Folk Festival tours (https://finding-aids.lib.unc.edu/20004/) on her conception of class. She jokes, “I never even knew that I belonged to the working class [before these tours]. I didn’t even know I had a class.” Although she’d been singing working class songs her whole life, she just didn’t know that they were called that. Later, when Dickens announces “Mining Camp Blues,” she talks about Trixie Smith being the only Black woman singer she knew of who wrote a song about mining. On the second tape, Gerrard introduces her song “Hey, Mr. Nixon” by saying “I wrote it after I saw the Indo-China peace campaign with Jane Fonda.” She also adds that she has only  performed it once before and needs a lyric sheet, which you then hear her try to pin up on the mic stand.

One of my favorite moments from the performance is when Gerrard plays the tune “Fortune” on banjo. She announces the tune with, “This is my favorite fiddle tune”, to which Dickens replies, “that doesn’t look much like a fiddle to me, Alice.” Alice admits, “I wish I could play it on the fiddle, but I can’t play it on the fiddle so I decided to try and learn it on the banjo.” Gerrard is in fact a fiddle player, and you can hear some of her playing throughout her collection. (Check out this footage of Alice playing fiddle with Bertie Dickens playing banjo https://dc.lib.unc.edu/cdm/singleitem/collection/sfc/id/56594/rec/1)

These spontaneous moments of Alice and Hazel in concert reveal a nuanced version of themselves that gets lost in the “pioneering women of bluegrass” narrative. Having never seen Hazel and Alice perform as a duo, I found that the talking, tuning and spaces in between each song offered a more complete perspective of the duo than I had heard before. I look forward to joining Alice Gerrard, Laurie Lewis, Dudley Connell,  Allison de Groot and Peter Siegel in conversation about the music of Hazel and Alice on October 14th at 7pm. You can sign up for the event here: https://lnkd.in/dzmhHcZf

2 thoughts on “Won’t You Come and Sing for Me? The Music of Hazel Dickens and Alice Gerrard”