“First Impressions“ is an ongoing series on the “first records” of several independent record labels releasing folk, blues, bluegrass, country, and other vernacular musics. Drawing from records and other materials in the Southern Folklife Collection, the focus of this virtual exhibition is on the albums that started it all for these labels in the LP era. 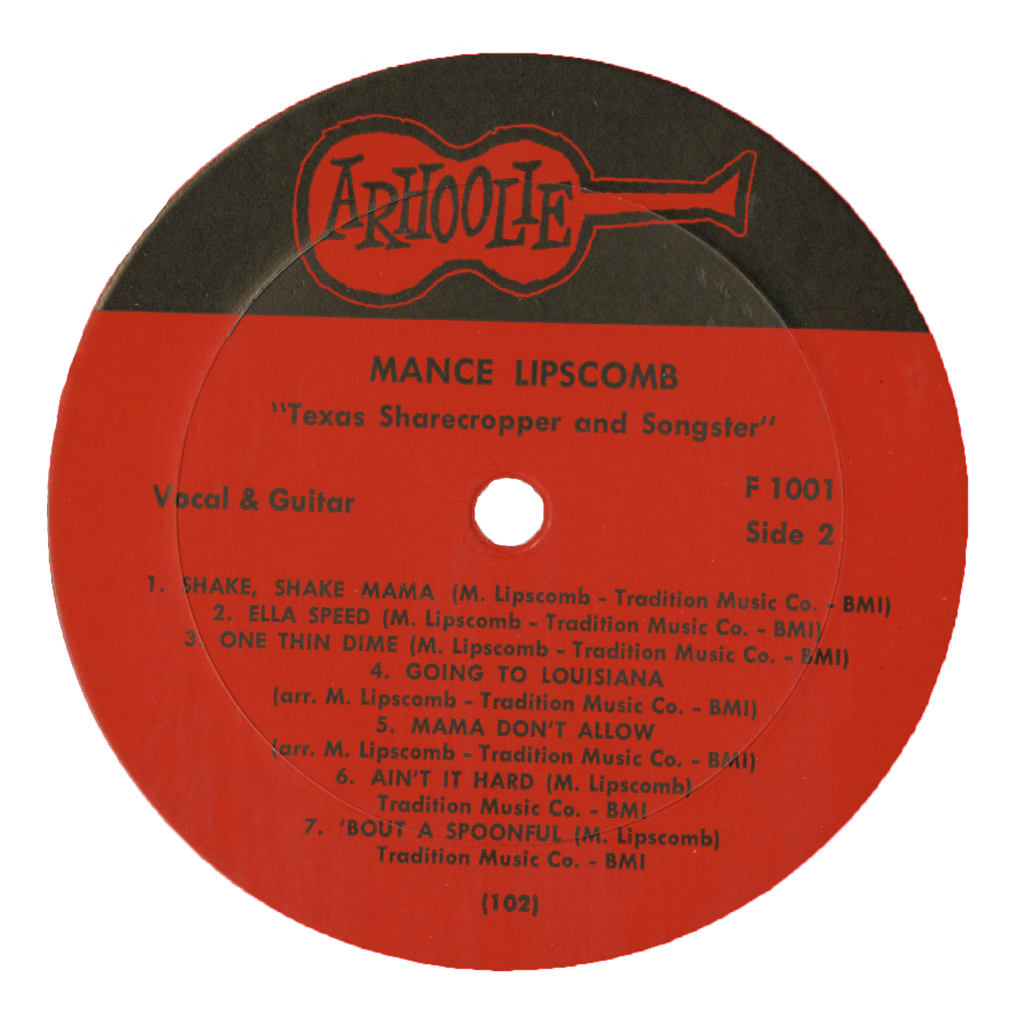 In 1959, Chris Strachwitz, a high school teacher living in California, set out for Texas hoping to meet and record one of his heroes, Lightnin’ Hopkins. Unable to find him, he resolved to return the next year, this time with a longer list of musicians to find and record. He had been buying and selling old 78 rpm records for several years, providing him with a little extra cash to buy some basic recording equipment. In 1960, with Mack McCormick’s help and a few tips from people along the way, he managed to meet Mance Lipscomb at his Navasota home. Texas Sharecropper and Songster is the product of recordings made that day, with the 65-year-old singing 14 songs he had picked up over a lifetime of playing music for friends, family, and both white and African-American dances. This impromptu session was Lipscomb’s first recording, and Strachwitz was initially unimpressed: “To be honest, I didn’t like his music that much – I love tough, nasty, old blues, and Mance was so pretty” (Goodwin, 1981). Of course, as Mance’s music elevated Arhoolie Records to a full-time venture, it must have grown on him: Lipscomb recorded 5 more albums for the label before his passing in 1976.
Listen to “Shake, Shake, Mama” from Side 2 of Texas Sharecropper and Songster:


Arhoolie Records takes its name from a word for a field holler, more often referred to as a “hoolie.” Chris Strachwitz founded the label in 1960, ultimately establishing its headquarters in El Cerrito, California. Arhoolie primarily released original recordings of living musicians, whereas two of Strachwitz’s later ventures, Blues Classics and Old Timey Records, were devoted to reissues of older recordings. Chris Strachwitz remained at the helm for the label’s lifetime, continuing to record and release all varieties of music, and leading the transition into the CD and digital realms. In May of 2016, Smithsonian Folkways acquired the Arhoolie catalog, and Texas Sharecropper and Songster was one of the first batch of albums re-released by the new label owners.

The founding of Arhoolie Records marked Chris Strachwitz’s first big step into the world of traditional music, but the label will be far from his only legacy. After moving to the United States from Germany in 1947, Strachwitz could hardly seem to stay away from the music. His passion for collecting 78s evolved into the Arhoolie Foundation, a nonprofit devoted to preserving and sharing his extensive collection. He started the Old Timey and Blues Classics labels soon after founding Arhoolie to release out-of-print recordings of blues and old-time musicians. Through Arhoolie, he published the Arhoolie Occasional and The Lightning Express, periodicals devoted to spreading information about blues music and recordings. Through a long-time friendship with documentary filmmaker Les Blank, he supported the production of documentaries on Arhoolie musicians like Mance Lipscomb and Lightnin’ Hopkins. Below is a segment from a 1981 interview by Strachwitz with Moses Asch, founder of Folkways Recordings, from the Archie Green Collection (20002).

Chris Strachwitz (CS): I’d like to get some of this on tape about your feelings in regard to reissuing old material or, that is, recordings that are really historical that have not been used by the major labels. You were certainly one of the first people to take a stand on this, weren’t you?
Moses Asch (MA): That’s right.
CS: What’s your attitude on this?
MA: Well, there’s a section in the Constitution of the United States, in which it says, “People have a right to know.” It’s part of the copyright, first copyright law of the land. And in there it says that no one is permitted, if they want the people to benefit, to take something out of circulation. If you buy a car, the manufacturer must have a replacement part as long as the car is operational. Otherwise, they lose all rights to the car. And I apply that same attitude to recordings. Once I feel that the manufacturer or the producer or the one that had the recordings originally issued the record, and then the record is not available, and it’s left out of their catalog, they throw that record into public domain and anyone can use it.
Listen to the full interview here. Digitization and streaming access to this recording were made possible through the SFC’s ongoing audiovisual preservation grant from the Andrew W. Mellon Foundation:


Elizabeth Cotten was born in Chapel Hill in 1893, the youngest of five children. After moving around the Southeast for many years, she settled as an adult in the Washington, D.C. area. Eventually, she came to work for the Seeger family of musicians, who, after hearing her play, helped expose her unique performance and songwriting abilities to the world. Most famous for her composition “Freight Train,” Cotten released just four solo albums in her lifetime: a series of three LPs for Folkways and Live!, a 1983 collection of live performances on Arhoolie Records.

The Southern Folklife Collection holds plenty of additional Arhoolie Records-related documentation, as well as a significant portion of the Arhoolie Records catalog on LP and other formats. Check out a few other documents and collections of interest below or search the collection yourself.