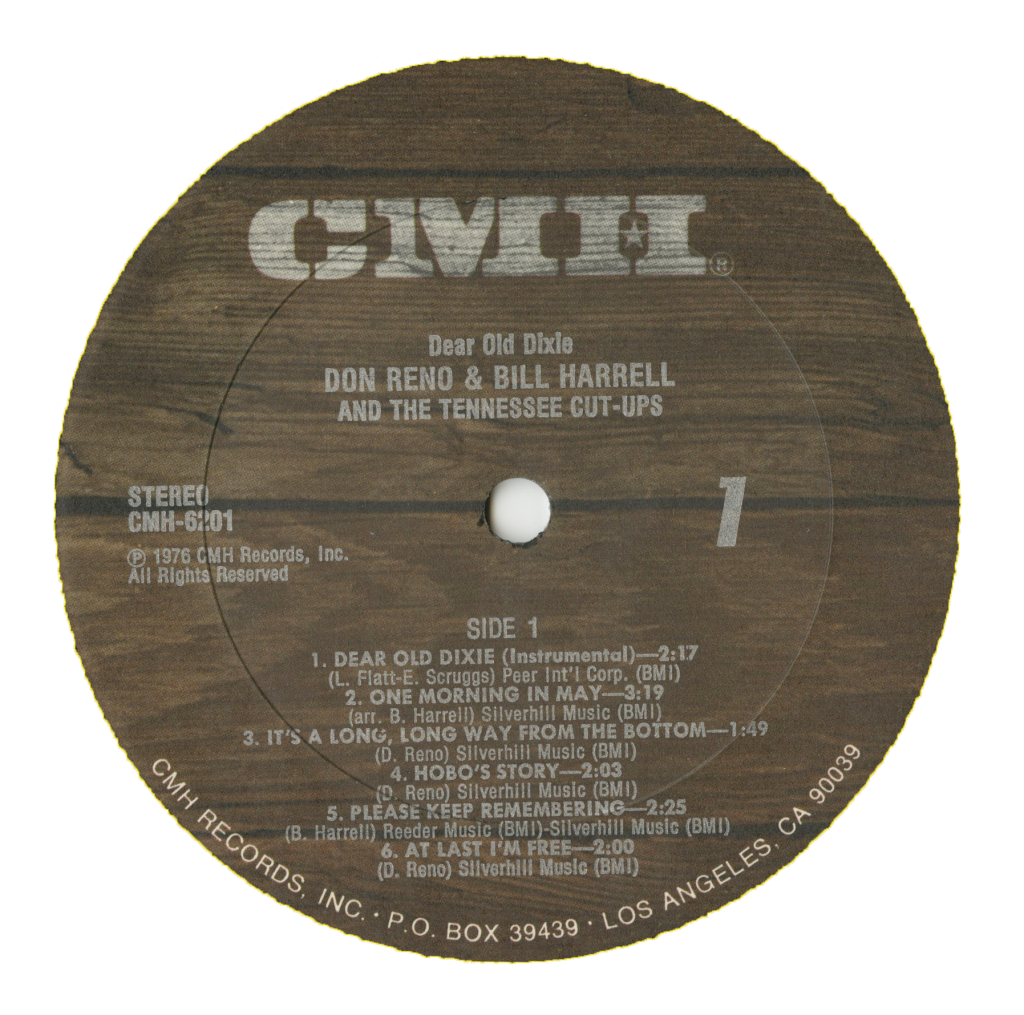 In 1975, country music industry veterans Martin Haerle and Arthur Smith started CMH Records, and Don Reno, Bill Harrell, and the Tennessee Cut-Ups were a perfect fit for the label’s first release. Haerle had many connections from his experience at Starday Records and in the radio business, and Don Reno had performed with Arthur Smith on several occasions. Don Reno, Bill Harrell, and their band were, by 1975, long-established bluegrass musicians. Performing with Bill Monroe’s Blue Grass Boys and, most famously, Red Smiley, Don Reno was a member of the first generation of bluegrass musicians that established the sound of the genre in the 1940s and 50s. Bill Harrell, too, was one of bluegrass’ most popular musicians, most successfully recording and performing with his band the Virginians. CMH, short for Country Music Heritage, aimed to give a home to these prominent, if aging, artists, many of whom had been dropped from the rosters at major labels. Don Reno and Bill Harrell had been performing together for over 10 years by the time they recorded Dear Old Dixie at Arthur Smith Studios in Charlotte, North Carolina. The album features mostly original and arranged tunes by the pair, and Arthur Smith even steps in to join Don Reno on guitar on  “B.G. Chase,” an instrumental he co-wrote with Reno.
Listen to a segment of “B.G. Chase,” from Side 2 of Dear Old Dixie, here:


Country Music Heritage (CMH) Records was founded in 1975 by Martin Haerle, a former vice president of Starday Records, and Arthur “Guitar Boogie” Smith, famed performer, TV host, and composer of “Guitar Boogie” and “Fuedin’ Banjos.” Their vision of the label was to release contemporary country music recordings, with a particular focus on bluegrass music. From the beginning, CMH signed long-established musicians, from the Osborne Brothers, Mac Wiseman, and Lester Flatt to the Stonemans, Benny Martin, and Joe Maphis. Most of these early releases, like Dear Old Dixie, were produced and recorded at Arthur Smith Studios in Charlotte, North Carolina. Soon after the launch of the initial album series (starting with Dear Old Dixie, CMH-6201), CMH began releasing their popular “Bluegrass Classics” double LP series (starting with CMH-9001). These two primary series, featuring modern recordings of bluegrass and country greats, carried the label into the late 1980s. In 1990, after the death of Martin Haerle, his son David Haerle took over operations of CMH. The younger Haerle started the “Pickin’ On” series in the 1990s, which offered bluegrass cover albums of classic and popular songs, from Pickin’ on the Beatles (1999) to Pickin’ on Nirvana (2017). In this same spirit, CMH is now home to other labels offering interpretations of classic music: Vitamin Records, an outlet for the Vitamin String Quartet, releases instrumental interpretations of popular artists from Radiohead to Kanye West, and Rockabye Baby! releases lullaby versions of popular rock songs.


Born in South Carolina, Don Reno was raised in Haywood County, North Carolina, where he first picked up a banjo at the age of five. After a decade or two in the country music business, Don Reno achieved lasting fame through his partnership with Red Smiley as Reno & Smiley. Bill Harrell, another successful bluegrass musician, had been touring and recording with his band the Virginians. Reno and Harrell first started performing together in 1964, after Red Smiley retired from music performance. Backed by the Tennessee Cut-Ups, Don Reno could usually be heard playing the 5-string banjo while Bill Harrell joined him on the guitar and sang lead. When Red Smiley returned from retirement in 1969, he performed with Reno and Harrell until his death in 1972. After parting ways in 1977, Reno and Harrell continued to tour and record with their respective bands for the rest of their lives.
Here is a brief segment of an interview between Alice Gerrard and Bill Monroe, from the Alice Gerrard Collection (20006), in which Bill Monroe discusses Don Reno’s impromptu “tryout” for the Blue Grass Boys:


Listen to the full interview, on FS-20006/8640, here. Streaming access to this recording were made possible through the SFC’s ongoing audiovisual preservation grant from the Andrew W. Mellon Foundation.

Arthur Smith was born in South Carolina, where he also began his musical career, but he achieved most of his success in Charlotte, North Carolina. After moving to Charlotte in 1943 to appear on WBT radio’s Carolina Calling, and was also featured on the later TV iteration of the show. Arthur Smith’s own The Arthur Smith Show was the first nationally syndicated country music television show, and ran for 32 years. When Smith’s 1955 recording “Fuedin’ Banjos,” which he had recorded with Don Reno, was reinterpreted without credit as “Dueling Banjos” in the 1972 film Deliverance, he successfully sued Warner Bros. for a substantial settlement and a songwriting credit. In 1957, Smith established Arthur Smith Studios in Charlotte, the location of many seminal recordings and prominent radio shows, as well as much of the CMH Records catalog of releases.

There is plenty of more information related to Don Reno, Bill Harrell, Arthur Smith, and CMH Records in the Southern Folklife Collection, as well as an extensive portion of the CMH catalog on LP, CD, and cassette. Check out a few other documents of interest below or search the collection yourself.

We love all of our sound recordings at the Southern Folklife Collection, and of course we especially love our 12″ LPs. Library staff are always working to make more of our records discoverable in the UNC Libraries online catalog, but first we need to sort through new accessions and do some inspection and quality control to get them ready for our Wilson Special Collections Library Technical Services team.
Through this process, we began to notice several “first records.” These albums, the first full-length releases by independent record labels, were fascinating and downright good listens in their own right. Collectively, however, they offer a valuable point of entry into the overwhelming catalogs of the many labels in the archive. The SFC holds a growing collection of tens of thousands LPs, spread across far too many labels to list here. Some of these labels are familiar, from early giants like Columbia and Victor, to folk music mainstays like Folkways. Still others are virtually unknown, like the often short-lived local, one-artist, or one-album ventures that appeared from time to time. For the most part, the labels presented here exist in a middle ground between these two extremes, releasing what could be broadly defined as vernacular music from a variety of traditions (folk music, blues, cajun music, zydeco, bluegrass, country, conjunto, etc.).
From off-shoots of non-profits to international operations, these labels and their founders were united by a common goal: to share the music they felt passionately about with as many people as possible. In some cases, recording the specific musicians on these first albums was the primary motivation for a label’s founding. Many of these labels are still releasing music, while others folded after only a few releases. Still others formed sub-labels, or were bought by or merged with like-minded collaborators, forming a sort of tangled family tree. The aim of this series is to provide a starting point for research, adding context to these recordings, the artists, the music, and the labels that formed with their release. Most of all, we hope you enjoy the music.
The first installment of “First Impressions”: Arhoolie publishes tomorrow, Thursday, November 15. We’ll put up a new post in the series every couple of weeks. Follow along here.