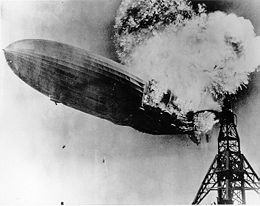 73 years ago today the German airship Hindenburg exploded in flames while attempting to dock in Lakehurst, New Jersey, killing 36 and pretty much ruining transatlantic zeppelin rides for everyone. Since the sinking of the Titanic almost exactly 25 years earlier had generated a raft of folk ballads on the subject, one might think the Hindenburg disaster would have received similar treatment. However, the world had changed a lot in that quarter century, and apparently there wasn’t great demand for folk ballads on a disaster that had been covered extensively by live radio reports and newsreel footage (you can watch a Pathe newsreel of the disaster here).
But folk singer Huddie Ledbetter, aka Leadbelly, gave it a shot. Recorded by Alan Lomax at the Library of Congress in June of 1937, here’s a clip of one of Leadbelly’s takes on “The Hindenburg Disaster”:
Hindenburg Disaster
(Clip from Leadbelly: The Library of Congress Recordings, FC-188 in the Southern Folklife Collection.)