Joan Fenton was a folklorist and performer who earned a master’s degree in folklore from the University of North Carolina Chapel Hill. The sound recordings in this collection include interviews, oral histories, songs, and tall tales from artists and musicians throughout North Carolina, South Carolina, West Virginia, and Louisiana. She also recorded a gospel group at an African American church service near Princeton, West Virginia. Those recordings include sermons and testimonies from members of the congregation. Thanks to our generous grant from the Andrew W. Mellon Foundation, the audio items in the Fenton collection are available and streaming online from the finding aid.
Fenton wrote the thesis for her master’s on Howard Cotten, a black tall-tale teller from North Carolina. These recordings include songs, tales, and interviews with Mr. Cotten and others like Laura Lea, a quilter from Chatham County, NC and Cotton’s friend and cousin, Willie Brooks. In the interviews, Cotten sings and tells stories about hitchhiking, ghosts, possum hunting, talking dogs, seeing a train for the first time and more (FT-20015/890-908).

The above interview is streaming through the finding aid.

Fenton was the editor and sound engineer on an episode of the UNC Folklore Broadcast featuring a recording of Howard Cotten and Willie Brooks telling tall tales or lies, as Fenton calls them in the introduction to the broadcast, along with blues songs and additional explanation and commentary in between songs and stories.
Some of my favorite audio recordings in the collection are from the John Henry Folk Festival in 1978. She gathered many interviews from this festival with musicians and attendees. She asks questions about the folk festival, why people attend this specific festival, what the blues mean to them, the importance of gospel music at a festival such as the John Henry festival, and many others. The answers she gets to her questions are part of larger conversations that are still relevant today. Some of the folks interviewed include Sparky Rucker, Ron Wilkerson, Hazel Dickens, Phyllis Boren, The Badgett Sisters, and Pigmeat Jarrett.

Finally, Fenton took part in video documentation of blues musicians including videos of Willie Trice. Fenton is described as recording the videos. They are also accessible and streaming in the Southern Folklife Collection Moving Image Materials finding aid. (VOR-30002/110-111).

Fenton resides in Charlottesville, VA where she owns 9 retail stores. She is one of the organizers of Blues Week at the Augusta Heritage Workshop in Elkins, WV. 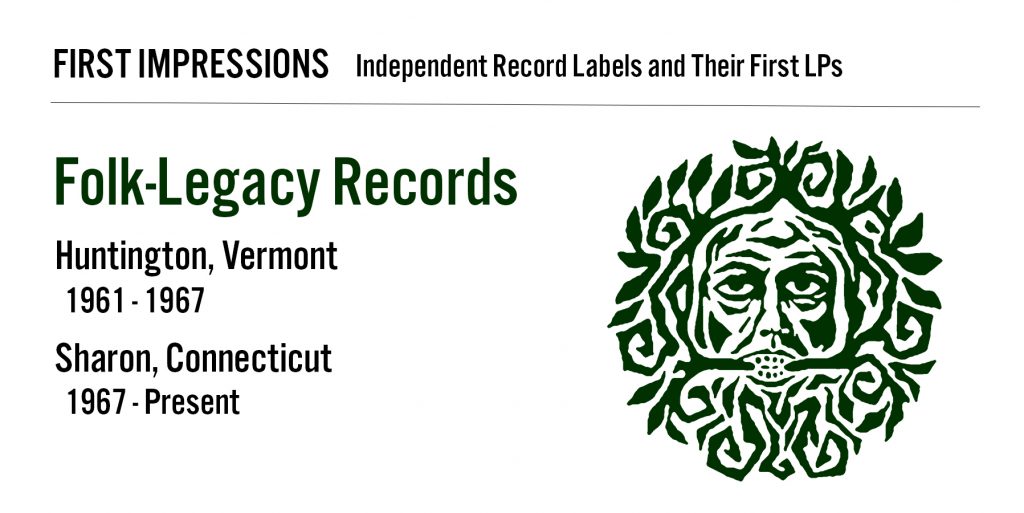 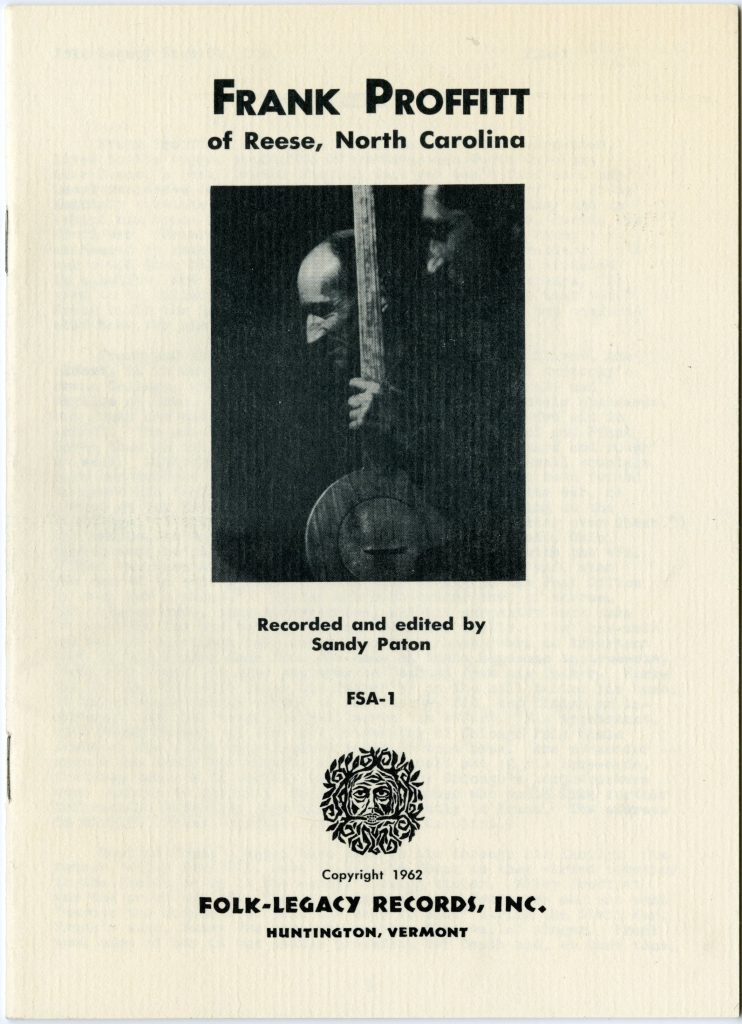 In 1961, Sandy Paton recorded Frank Proffitt, a traditional singer, banjo and dulcimer player and instrument maker, in his home in Reese, North Carolina. 14 songs from that recording session were released on the 1962 Folkways album, Frank Proffitt Sings Folk Songs. Sandy Paton was a folk singer in his own right, having already released a well-reviewed album on Elektra Records in 1958, The Many Sides of Sandy Paton. In 1961, however, Paton and an old friend, Lee B. Haggerty, decided to start a record label in Huntington, Vermont. Paton had not been completely satisfied with the Folkways release of Frank Proffitt’s songs, and decided to release more material of his as the first LP on his new label, Folk-Legacy Records. This new album, Frank Proffitt of Reese, North Carolina, featured 17 songs, including the song preserved by Proffitt and made famous by the Kingston Trio, “Tom Dooley.” Most of the songs are of unknown authorship and are credited as traditional, while 4 are credited to Proffitt and 4 more are ballads collected by Francis James Child in the late 19th century. This first Folk-Legacy release, with a stark black-and-white cover, simple packaging, and comprehensive liner notes, is emblematic of their early catalog. In 2001, the album was reissued as Folk-Legacy CD-1, and is now available on digital and streaming platforms.
Here is an excerpt from Track 8, the murder ballad “Tom Dooley”:

Also check out Track 9, “I’m Going Back to North Carolina”:

Frank Proffitt was born in Laurel Bloomery, Tennessee in 1913, and raised in Reese, a small town in Watauga County, North Carolina. Proffitt worked in a variety of trades throughout his life, including carpentry, factory work, and growing tobacco. As a carpenter, he became well-known for his handmade fretless banjos and dulcimers, but he was always locally known for his banjo-playing and singing. In the late 1930s, the folksong collectors Anne and Frank Warner met Proffitt through their search for a dulcimer builder. Among the songs that Frank Proffitt shared with the Warners was “Tom Dooley,” a ballad which had been passed through several generations of his family. The Warners in turn shared the song with Alan Lomax, who published it and several others in his book Folk Song USA in 1947. The Kingston Trio learned the song from one of the Warners’ recordings, and the version they sang became one of their first and biggest hits. Frank Proffitt continued to live and work in Reese, North Carolina, and only released two albums in his lifetime: one on Folkways Records and one on Folk-Legacy Records, both recorded by Sandy Paton. After these two releases in the early 1960s, Proffitt enjoyed even more attention in the ongoing folk revival, performing at the Newport Folk Festival in 1963 and the 1964 New York World’s Fair. Frank Proffitt passed away in 1965 at the age of 52. In 1969, Folk-Legacy Records released an album of previously unreleased recordings of Proffitt as the Frank Proffitt Memorial Album.
As part of a radio program on record collectors, Billy Faier interviewed Frank and Anne Warner about their lives and work. In this clip from FT-20380/11368 in the Billy Faier Collection (20380), the Warners tell the story of how they first met Frank Proffitt at the home of dulcimer-maker Nathan Hicks in Beech Mountain, NC:

THE LABEL & ITS FOUNDERS

By 1960, Sandy Paton was working a regular job as the manager of a record department in Chicago, where he focused primarily on stocking and selling folk music. Eventually, however, he and his wife Caroline decided to leave the city life for rural Huntington, Vermont. Soon after their move, they were visited by their friend Lee B. Haggerty, who suggested they start a record label with the rest of Sandy Paton’s unreleased field recordings. Haggerty had just received a sizable inheritance, which formed the foundation of Folk-Legacy Records along with Paton’s tapes of Frank Proffitt. Haggerty joined the Patons in Vermont, and they operated the label from a large barn near their home. Everyone was involved in the operation of the label, from making and purchasing recordings, designing record sleeves, writing liner notes and transcribing lyrics, placing ads in folk music publications, and taking the records on the road to festivals and conventions across the country. In 1967, they moved the label from its home in Vermont to Sharon, Connecticut. The label ultimately released around 150 recordings on LP, CD, and cassette over their more than 50 years of operation. Lee B. Haggerty passed away in 2000 and Sandy Paton passed away in 2009. As of this posting, Caroline Paton maintains the label, which survives primarily through its website.  [update: Caroline Paton passed away after this post was published.  You can read her obituary here.  The Folk-Legacy catalog was acquired by Smithsonian Folkways and can be found here.]

In 1991, Ronald Cohen interviewed Sandy and Caroline Paton in their home, and in this clip from that interview, FS-20239/7539 in the Ronald D. Cohen Collection (20239), Sandy Paton describes the humble origins of Folk-Legacy Records.

Operating a record label of any size is a costly venture, but operating a relatively niche, small label like Folk-Legacy was rarely profitable. In part to supplement their income, the Patons sold other items alongside their recordings, both through mail-order and from a table at conventions and festivals. Several accounts describe Sandy Paton as always carrying one of his Limber Jacks, a small, wooden dancing toy the Patons sold for many years. Recognizing a market for the beautiful instruments made by craftsmen like Frank Proffitt, the Patons also sold hand-crafted “Appalachian” dulcimers from their headquarters in Connecticut.

In discovering the first LP released by a given record label, one challenge can be deciphering the numbering system used by the label. Sometimes the process is simple – early catalogs and the records themselves say “#1” or “1001,” or the liner notes explain that this is the first album released by the label. However, it can also be more complicated – sometimes multiple lines of recordings (i.e. a 400 and 600 “series”) are released simultaneously, labels have several releases prepared before their launch, or numbering systems change throughout the years. Folk-Legacy’s initial numbering system includes four “number 1s,” each with a different prefix: Frank Proffitt is FSA-1, while there is also an FTA-1, FSI-1, and FSE-1. Based on catalogs and various reviews, these prefixes could be loosely translated as: FSA = Folk Songs – Authentic, FTA = Folk Tales – Authentic, FSI = Folk Songs – Interpreters, and FSE = Folk Songs – England. Folk-Legacy continued to use these prefixes in creative (if sometimes confusing) ways throughout their catalog. For example, when Sandy and Caroline Paton released their first album on Folk-Legacy as performers, Sandy and Caroline Paton, they changed the prefix to “EGO” to acknowledge what was required to release an album of your own music on your own record label.

There are an abundance of materials related to Folk-Legacy Records, Frank Proffitt, and other independent record labels in the Southern Folklife Collection, as well as an extensive portion of the Folk-Legacy catalog on LP and CD. Check out a few other items of interest below or search the collection yourself.