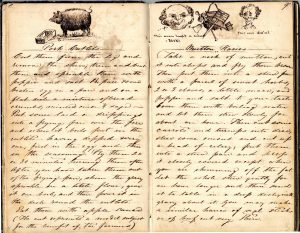 The next stop on the Diverse Communities bus tour Jessica and I went on was Parrish Street, where several African American businesses originated and prospered in the early 20th century. Known as “Black Wall Street”, several African American operated enterprises started on Parrish Street, such as the North Carolina Mutual Life Insurance Company (founded in 1898) and Mechanics & Farmers Bank. (founded in 1908).

This vibrant and thriving area was unfortunately decimated – along with other businesses and communities – with the creation of Highway 147 along with numerous other factors. While this did not completely eradicate black enterprise in Durham – NC Mutual and M&F are still thriving – it did physically destroy a significant part of the black neighborhood and in turn, an important part of history.

Mr. Reginald Jones, who works with the Parrish Street Project, talked with us about seeking to revitalize the Parrish Street area. The goal is to commemorate the important legacy of Black Wall street while attracting new businesses to the area to encourage economic revitalization.

Echoing Jessica’s sentiments in an earlier post, it was interesting for the two of us as archivists to be involved in this conversation. We are generally concerned with the preservation of history. It’s important to think about Parrish Street’s heritage in the context of urban planning and development. The urban planning students asked compelling questions about working with the community in order when planning any sort of redevelopment or conceiving any project in a neighborhood. The importance of preserving and celebrating the cultural heritage of a particular area was not lost in the conversation of burgeoning neighborhood development.

The SHC has a number of collections that relate to black owned businesses on Parrish Street and throughout the South. One example is the William Jesse Kennedy Papers, who was the fifth president of NC Mutual Life Insurance.

Several other collections contain materials relating to Mechanics & Farmers Bank, such as the Floyd B. McKissick Papers and the Southern Oral History Program interview with Howard Lee, which describes his interactions with former M&FB president John Wheeler.

Recently Holly, my colleague here at the Southern Historical Collection, and I got the chance to tag along on a bus tour of Durham, N.C., with the Department of City and Regional Planning here at UNC-Chapel Hill. The tour focused on planning and development activities in several areas of downtown Durham, and how history and community influences, informs, and becomes an integral part of those activities. Holly and I were amazed at how visible history was at some of the places we visited, and were surprised at how connected our work and our collections at the SHC are to the work of these community organizers and city planners. We’d like to share a little bit about our trip, and connect some of the things we saw to materials we have here in the collection

Our first stop was at the Hayti Heritage Center, an African American cultural and educational center located in what was formerly the African American community of Hayti. The center, established in 1975, is based in the structure that was St. Joseph’s A.M.E. Church, a National Historic Landmark built in 1891. The space is now used to preserve the heritage of the neighborhood and the church, and holds programs aimed at “advancing cultural understanding and examining the experiences of Americans of African descent — locally, nationally and globally.”

At the center, we heard from J. C. “Skeepie” Scarborough, a funeral services director whose family and business have been a part of Hayti for generations. He described how unique Durham was for its thriving African American community in the early to mid-20th century, which boasted African American-owned businesses, a hosptial, a college, and an active music and cultural scene. He also discussed growing up in Hayti, what it was like during the Civil Rights movement, the role of the church in community organizing, and how the neighborhood was lost during “urban renewal” efforts in the 1960s, especially due to the construction of the Durham Freeway.

We are fortunate to have a number of collections related to Hayti here in the Southern, including:

You can also listen to digitized oral histories about Hayti. For instance, Margaret Kennedy Goodwin talks about the close-knit African American community in Durham during the 1930s and 1940s, and the role of religion her her family’s life (listen to Margaret Kennedy Goodwin’s Oral History interview). Be sure to look for Holly’s upcoming post about our tour of Durham’s Parrish Street, also known as Black Wall Street.

We include here a video that contains excerpts of audio from a 1974 oral history interview with Igal Roodenko, participant in the 1947 Journey of Reconciliation, from the collection of the Southern Oral History Program (SOHP) at UNC Chapel Hill. The SOHP’s oral histories are archived and preserved at the Southern Historical Collection. Several hundred of these oral histories have been digitized and are available online. To listen to the full interview with Igal Roodenko, please visit:

This video also contains a montage of images, primarily taken from the holdings of the Southern Historical Collection. The SHC contains scattered documentation about the 1947 Journey of Reconciliation and about the life and work of Reverend Charles M. Jones, including (but not limited to):

We are very proud to be the repository for these important primary source materials documenting this often-forgotten episode of Southern history.  However, we can’t help but notice that there are many missing pieces in the archival record that might tell the rest of the story.  Could it be that there really is only one photograph of the 1947 freedom riders?  What about documentation of the cab drivers and others who opposed the riders?  We still have our work cut out for us.

Before Rosa Parks, there was Irene Morgan

On Saturday, February 28, 2009, the Chapel Hill/Carrboro NAACP, the Town of Chapel Hill, and the people of the Chapel Hill community gathered for a dedication of a highway historical marker to commemorate the 1947 Journey of Reconciliation (also known as the first “Freedom Rides”). The dedication included a march from Hargraves Community Center, down Franklin Street to the site of the marker at the southeast corner of Rosemary and Columbia Streets.

Attending the ceremony was George M. Houser, organizer of and key participant in the 1947 freedom rides. Houser, a spry 92-year-old World War II era pacifist, spoke eloquently about his experiences and even broke out a lyric sheet to give a nice rendition of the song “You Don’t Have to Ride Jim Crow.”

This new historic marker in Chapel Hill commemorates a pivotal moment in the late-1940s struggle to desegregate interstate bus, air, and train travel across the United States. The Journey of Reconciliation sought to test the Supreme Court’s ruling in the Morgan v. Commonwealth of Virginia case – a ruling which outlawed the enforcement of state Jim Crow laws over interstate travel.  An interracial group of 16 activists, including George Houser and civil rights leader Bayard Rustin, embarked from Washington, D.C., traveling through the upper South.  They met with strong resistance throughout, with resistance turning to violence during their stopover in Chapel Hill.

Rather than just recount the whole story myself, I’ll let Houser and Rustin tell it in their own words. To document the experience of the Freedom Rides the two co-wrote the pamphlet, “We Challenged Jim Crow” (published by the Fellowship of Reconciliation and the Congress of Racial Equality).  The Southern Historical Collection happens to have a copy of it, as a part of the Charles M. Jones Papers.  We gladly reproduce it below.  The Chapel Hill portion of the story occurs on pages 5 and 6.

[Stay tuned for tomorrow’s Part 2 post.  You’ll hear more about Rev. Charles Jones’s involvement in this moment in history and you’ll get to hear some of the audio from an oral history with one of the freedom riders…]