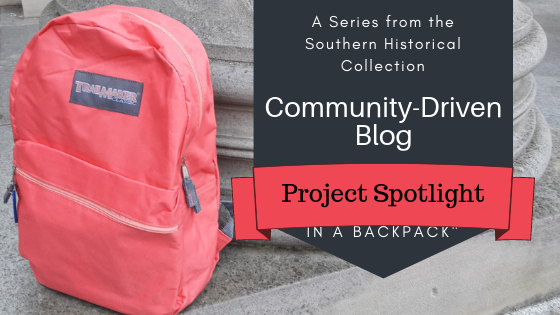 On September 21st a group of CDA team members and students from the Public History graduate program led by Dr. Charles Johnson at North Carolina Central University drove to Princeville NC to conduct oral histories. We partnered with lifelong citizens, town officials, and longtime residents of the Princeville community to collect stories and workshop the oral history backpacks. This collaboration between the CDA, NCCU, and Dr. Glenda Knight, our contact in Princeville and mayor pro tem, came about from a charrette, a type of focus group, held in Durham over the summer. Dr. Glenda Knight helped organize the event and found space for us in the temporary Princeville town hall, located in nearby Tarboro. Though it was spared the brunt of Hurricane Florence, Princeville is still recovering from Hurricane Matthew 2016 and Hurricane Floyd from 1999, hence our Tarboro location.

Adreonna Simmons, a student interviewer, reflects on her conversations with Dr. Porter a lifelong resident.

During our time in Princeville, I had the pleasure of interviewing a woman who had been a lifelong resident of the town. She shared stories about growing up in a close-knit community and how it shaped her into the woman she is today. She reminisced on her time in college and proudly told why she returned to her hometown when most college graduates would have moved on to bigger cities. Despite these pleasantries, it was how Hurricane Floyd and Hurricane Matthew impacted her and the community of Princeville that stuck out to me. Dr. Porter’s home was destroyed twice due to these hurricanes and Princeville’s proneness to flooding. At our roundtable discussion about the project, with tears in her eyes, she explained how having to build from the ground up once only to be in the same situation 15 years later was difficult and enough to make anyone lose hope. Some of the residents interviewed hoped that their stories would serve as a narrative for Princeville and the devastation that they have been dealing with for decades due to a lacking dam and drainage system would be addressed by the State legislature. These oral histories show the side of history that is often forgotten and gives voices to those that for too long have been silenced.

Interviewees were honest about the struggles in Princeville. But equally evident is the pride and love community members have for their town.  For Dr. Porter,

Our work in Princeville was part oral history collection and part training. We left three backpacks in Princeville for the community to use and we will return in a few months to gather the histories saved on recorders. Those recordings will be sent to the town and eventually there will be a plan about what to do with the new and growing collection. We discussed having a history harvest and look forward to getting community feedback and returning to Princeville.

Here is just one clip of the many poignant moments from our time at Princeville. Dr. Porter discusses the importance of documents for safeguarding memories and the devastating grief that follows when you lose everything.