The following guest post was written by David Tenenholtz, the 2015-2017 UNC-CH Music Library CALA.
Celebrating African-American Music
June is African American Music Appreciation Month, as officially proclaimed by President Barack Obama. The Stone Center Library and the UNC Music Library are excited to take on President Obama’s described mission to “raise awareness and foster appreciation of music that is composed, arranged, or performed by African Americans” during this month. With resources available both at the Stone Center Library and the Music Library (located at Wilson Library’s lowest level, East entrance), you will be able to learn about the varied styles and rich history of African American music. If you visit the Music Library, please take note of the visual display in the front entrance highlighting some hallmarks of this topic. You will notice albums showcasing the legendary pianistic skill of Art Tatum, the artistry of composers like Duke Ellington and T.J. Anderson, the showmanship of Sammy Davis, Jr. and Carmen McRae, and the vocal finesse of opera singer Jessye Norman, to name only a few. 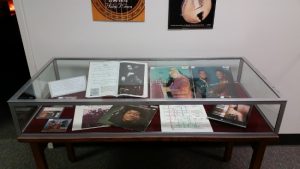 As you can tell from reading this post, this subject may have nearly limitless avenues to explore and research. As an entry-point, please consult with one of the librarians at either the Stone Center Library or the Music Library. To get a quick start, here are introductions to four “firsts” in the history of African American music, and some links to resources that may inspire you to visit us and learn more!
1903: In Dahomey, the first Broadway musical written by African American composers, and starring an entirely African American cast, premieres in New York. You can find the sheet music and biographical information on Will Marion Cook (1869-1944), one of the major African American composers at that time at the Music Library.
1935: Jazz pianist Teddy Wilson (1912-1986) joins the Benny Goodman Trio, earning them the distinction of being the first known interracial jazz group. Wilson, deemed the “Jackie Robinson of Jazz,” would go on to record many hit jazz songs with Goodman, vocalist Billie Holiday, and as a soloist.
1962: Bandleader and composer Edward Kennedy “Duke” Ellington scored the soundtrack to the film Paris Blues, starring Sidney Poitier, Paul Newman, and Louis Armstrong. With this score, Ellington earned the first nomination by an African American composer for an Academy Award for Best Musical Score.
1968: Henry Lewis (1932-1996), a virtuoso on the double-bass who joined the Los Angeles Philharmonic before the age of eighteen, is appointed to lead the New Jersey Symphony, making him the first African American symphony conductor. Within another few years, Lewis went on to be the first African American to conduct the Metropolitan Opera.

Sponsored by the Association of Black Women Historians, this award recognizes an emerging female scholar of African descent and fosters scholarly research in Africana Women’s history.  Each year an award will be given for the best, unpublished original essay from either a graduate course or a chapter from a thesis or dissertation for the award year. The essay must be wholly focused on some aspect of history on black women from the U.S. and/or Africana Diaspora.  Application deadline June 30, 2016.
Application requirements linked here: http://www.abwh.org/index.php?option=com_content&view=article&id=97&Itemid=159

The ASA Women’s Caucus aims to promote and celebrate the best original work by an African woman (or women) prioritizing African women’s experience.  This year’s Aidoo-Snyder Book Prize of $500 will be given for creative work.  Please note that authors may submit their own work, or publishers may submit an authors’ works.  Application deadline June 30, 2016.
Application requirements linked here:  http://asawomenscaucus.matrix.msu.edu/?page_id=11