The American Dance Festival is an annual series that celebrates modern dance with performances from a wide range of styles and companies. This year’s lineup of diverse performances include Paul Taylor, the Vertigo Dance Company, and Ragamala Dance.
The ADF also coordinates the Black Tradition in American Modern Dance project. In 2007, the project worked with PBS to create a documentary, Free to Dance, chronicling the history of African American contributions to modern dance. (The program’s website also has a great timeline on the subject.)
If you want to learn more about African American dance history, check out some of the books the Stone Center has to offer.

These books all focus on groundbreaking African American ballerinas:

A biography of Pearl Primus, a modern dancer who brought African dance to American audiences.

Pearl Primus appeared at the American Dance Festival several times, and in 1987 she participated in an event for African American choreographers. In 2000, the ADF was given a collection of Primus’ work and notes. (Find out more here.)
Primus’ choreography continues to influence the modern dance scene, and her company performed at ADF as recently as 2008:
[youtube https://www.youtube.com/watch?v=rUlfIaDAsHk&w=560&h=315]
The American Dance Festival will continue into next week, with the final performance on July 28.

Welcome back, faithful readers! Yesterday we posted the first of three listings of new books currently on display here at the Stone Center Library. Today’s new titles cover a wide range of the arts, including dance, film, music, and visual arts.
The Devil Finds Work (James Baldwin)
Horror Noire: Blacks in American Horror Films from the 1890s to Present (Robin R. Means Coleman)
Black Social Dance in Television Advertising: An Analytical History (Carla Stalling Huntington)
Marion D. Cuyjet and Her Judimar School of Dance: Training Black Ballerinas in Black Philadelphia 1948-1971 (Melanye White Dixon; with a Foreword by Lynette Young Overby)
The Dance Claimed Me: a Biography of Pearl Primus (Peggy & Murray Schwartz)
The Life, Art, and Times of Joseph Delaney, 1904-1991 (Frederick C. Moffatt)
A to Z of African Americans: African Americans in the Visual Arts (Steven Otfinoski)
Back in the Days: Remix (Photographs by Jamel Shabazz)
Slaves Waiting for Sale: Abolitionist Art and the American Slave Trade (Maurie D. McInnis)
Intrigued by any of the above titles? Click on the links for a brief summary or come by the Library and peruse at your leisure!
Coming tomorrow: post three of three, featuring a bevy of hot topics such as religion, gender studies, and more… stay tuned!

We hope you’re all excited for TODAY’S book talk with UNC history professor “Fitz” Brundage, as he discusses his latest book, Beyond Blackface: African Americans and the Creation of American Popular Culture, 1890-1930 (UNC Press 2011).

***
Free and open to the public

In anticipation of this event, Stone Center Librarian Shauna Collier has put together a list of related books available at UNC libraries. Check it out!

Happy reading, and we hope to see you TODAY at 5pm in Wilson Library!

Save the date! On Tuesday, November 1st, UNC history professor Fitzhugh Brundage will deliver a lecture on the history of African Americans in American popular culture. The talk will will take place at 5:30pm in the Wilson Special Collections Library, with a reception at 5:00pm. This event is FREE  and open to the PUBLIC
Brundage is the editor of the UNC Press book Beyond Blackface: African Americans and the Creation of American Popular Culture, 1890-1930, a collection of essays from sixteen scholars in various disciplines that “address the complex roles of black performers, entrepreneurs, and consumers in American mass culture during the early twentieth century.” This book is currently available at Davis Library and the North Carolina Collection (library use only) – check for availability here.
Brundage is also the William Umstead Distinguished Professor of history at UNC, and his books include The Southern Past : A Clash of Race and Memory(2005), A Socialist Utopia in the New South: The Ruskin Colonies in Tennessee and Georgia, 1894-1901 (1996) and Lynching in the New South: Georgia and Virginia, 1880-1930.  (1993)
In 2006, he was awarded the Lillian Smith Award from the Southern Regional Council and the Southern Historical Association’s Charles S. Sydnor Award for a distinguished book in southern history for The Southern Past: A Clash of Race and Memory.
This event is sponsored by the Friends of the Library and the Stone Center Library for Black Culture & History. For more information, contact: Liza Terll, Friends of the Library at (919) 962-4207 or liza_terll@unc.edu.
Hope to see you there!

Did you know? Yesterday marked the start of National Hispanic Heritage Month, which is observed from September 15-October 15. This holiday period was established in 1968 and recognizes the contributions and heritage of those U.S. citizens whose ancestry traces back to Spain, Mexico, the Caribbean and Central and South America.
As explained on the official website, “The day of September 15 is significant because it is the anniversary of independence for Latin American countries Costa Rica, El Salvador, Guatemala, Honduras and Nicaragua. In addition, Mexico and Chile celebrate their independence days on September 16 and September18, respectively. Also, Columbus Day or Día de la Raza, which is October 12, falls within this 30 day period.”
This year’s theme is “Many Backgrounds, Many Stories…One American Spirit” and a wealth of related resources are available online: exhibitions and collections, images, and even audio and video clips.
Here at the Stone Center Library, we have numerous books on Latin American topics… check out a sampling below, and stay tuned for more highlights over the course of the month!

Calling all dance enthusiasts! Take a look at a few of our latest titles on dance in the Caribbean: 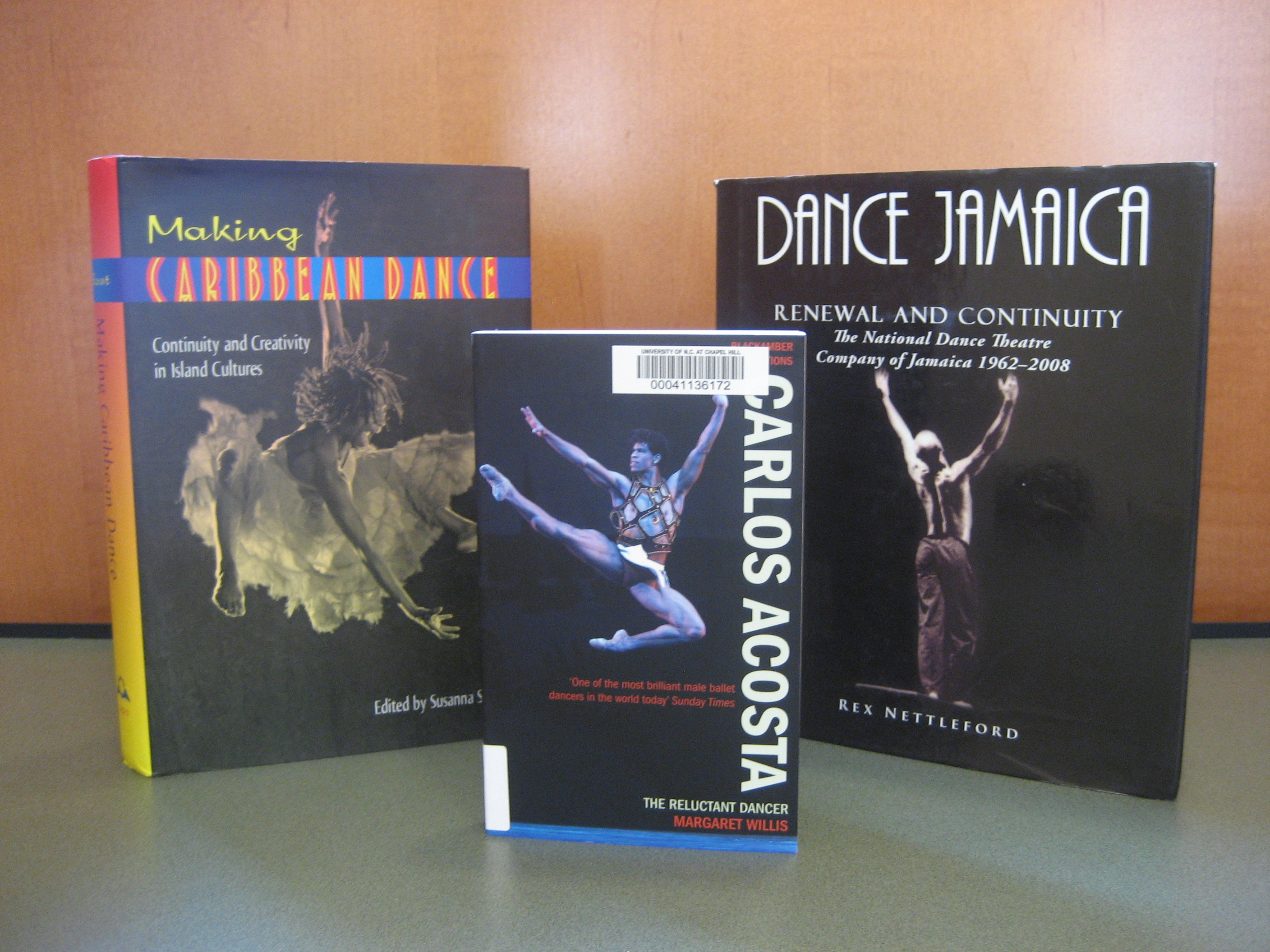 Pictured above: Making Caribbean dance: continuity and creativity in island cultures (2010)  |  Carlos Acosta: the reluctant dancer (2010)  |  Dance Jamaica: renewal and continuity: the National Dance Theatre Company of Jamaica 1962-2008 (2009).
Looking for other types of resources? Don’t forget to check out the Dance section of our Guide to the Web!
Happy reading, and hope you all have a fabulous holiday weekend! 🙂

Established in 1934, the American Dance Festival is “an international magnet for choreographers, dancers, teachers, critics, musicians, and scholars, drawing them together to experiment, explore, learn, collaborate, and create in a supportive environment.”
Housed at Duke University since 1977, this year’s performances will take place June 9-July 23.
Notable among the all-start line-up are two African-American troupes: EVIDENCE and the Bill T. Jones / Arnie Zane Dance Company. This year’s season is also the last for its director of 43 years, Charles Reinhart.
Interested in learning more? Check out this recent article in the News & Observer, or peruse the ADF website for the festival’s history at a glance and an interactive timeline. Enjoy! 🙂

This week, the Stone Center Library recommends yet another new arrival to our collection: Blackberries and Redbones: Critical Articulations of Black Hair/Body Politics in Africana Communities. This anthology seeks to respond to the following question: “As a text, how are Black bodies and Black hair read and understood in life, art, popular culture, mass media, or cross-cultural interactions?.”
With editors Regina E. Spellers and Kimberly R. Moffitt at the helm, Blackberries and Redbones is divided thematically into five areas:

An interdisciplinary mix of scholarly essays, poems, and other creative writing, each selection concludes with 2-3 discussion questions for further thought, making this a collection both academically rigorous and supremely accessible to the general public.
Writings include titles such as “From Air Jordan to Jumpman: The Black Male Body as Commodity” (Ingrid Banks); “Weaving Messages of Self-Esteem: Empowering Mothers and Daughters through Hair Braiding” (Tracey Y. Lewis-Elligan); “‘I am More than a Victim’: The Slave Woman Stereotype in Antebellum Narratives by Black Men” (Ellesia A. Blaque); “The Big Girl’s Chair: A Rhetorical Analysis of How Motions for Kids Markets Relaxers to African American Girls;” and “Sun Kissed or Sun Cursed?: Exploring Color Consciousness and Black Women’s Tanning Experiences” (Regina E. Spellers).
You can also check out their companion website www.blackberriesandredbones.com, which features a discussion board (registration required). Interested in learning more? Come by the library and check it out – Blackberries and Redbones is currently featured in our reading area display. Hope to see you soon!

Yesterday marked the start of ALA’s National Library Week 2011 and this year’s theme is “Create your own story @your library.”  If you’re looking for new stories to add to your arsenal, be sure to check out the Stone Center Library’s latest display of new titles.
Interested in Caribbean topics?  Then today’s highlights might be right up your alley.  Click on the links below for more information, or come by the library to browse in person!

“Clarke and Clarke have created a journal that provides an ethnographic record of the East Indians and Creoles of San Fernando–and the entire sugar belt south of the town known as Naparima. They record socio-political relations during the second year of Trinidad’s independence (1964), and provide first-hand evidence for the workings of a complex, plural society in which race, religion, and politics had become, and have remained, deeply intertwined.”

“Contrary to popular belief, the ideology of empire in the nineteenth-century British produced a number of West Indian Creoles who took the language and values of Britain’s supposedly liberal empire and turned them upside down. . . Inverting the racist hierarchy of nineteenth-century British imperial thought, twentieth-century political activists in the British West Indies used the concepts of liberal ideology to claim that the subject people of the West Indies constituted a Creole nation that deserved the right to govern itself.”

“This ground-breaking study of the Caribbean’s iconography traces the history of visual representations of the region, as perceived by outsider and insider alike, over the last five hundred years.”

“Artists, teachers, administrators, and researchers survey many facets of dance in the region, both folk dance from African and colonial heritages, and art dance that has mingled those traditions with others around the world.”

“Lewis’ last manuscript, The Modern Caribbean: a New Voyage of Discovery,” was scheduled to be published about the time of his death in 1991. Most of the chapters in this volume come from that previously unpublished work, although a few others are included. Lewis, a social scientist who was based at the University of Puerto Rico since 1955, wrote widely on the Caribbean from an interdisciplinary point of view.”

Coming tomorrow: new titles on display relating to other aspects of the African diaspora.