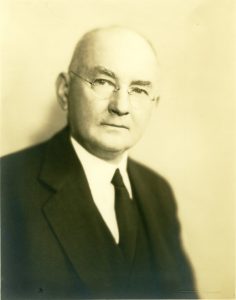 Louis Round Wilson was born on December 27, 1876, in Lenoir, North Carolina. He graduated from the university in 1899, and became the University Librarian in 1901. He would later head UNC’s first extension program and help found and oversee UNC Press. In 1931, Wilson established UNC’s School of Library Science (now, the School of Information and Library Science), serving as its first director. A dedicated educator, Wilson was elected president of the American Library Associations in 1935 and to this day remains an important figure in the history of library education. In 1930, the university named its then-new library for Wilson: the Louis Round Wilson Library. Wilson Library now houses the university’s special collections, including the Southern Historical Collection, which holds the Louis Round Wilson Papers. Happy Birthday, Louis!