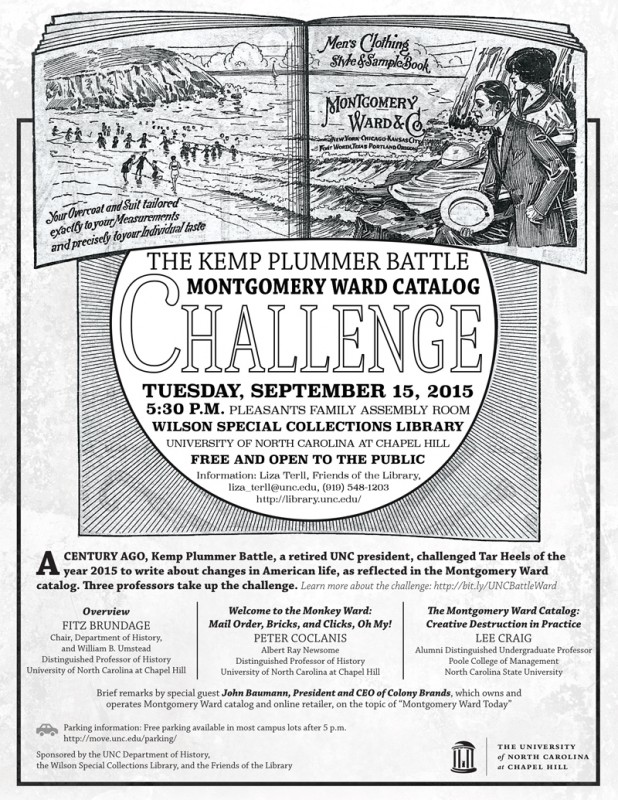 Join us Tuesday evening for the final installment of the Kemp Plummer Battle Montgomery Ward Catalog Challenge, a program set in motion 100 years ago.

In 1915, former UNC president Kemp Plummer Battle presented the North Carolina Historical Society with a metal box containing a current Montgomery Ward catalog and a letter outlining a challenge – the box was to be opened in 1965 and in 2015, and the catalog compared to one from the present day. Back in April, we held the first installment of this challenge, which featured talks from UNC professors John Kasson and Dana McMahan. Tuesday evening, the discussion continues with talks from professors Peter Coclanis and Lee Craig.

Fitz Brundage, chair of the Department of History at UNC, will introduce the program. Special guest John Baumann, President and CEO of Colony Brands, which owns and operates Montgomery Ward catalog and online retailer, will also make brief remarks on the topic “Montgomery Ward Today.”

In preparation for the event, the 1915 and 1965 Montgomery Ward catalogs and Robert B. House’s 1965 essay have been digitized and are available online.

We hope you’ll join us Tuesday for the finale of this 100-year challenge!