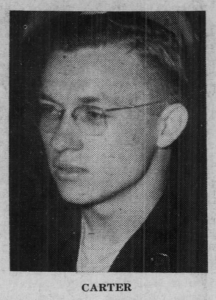 In 1953, journalist W. Horace Carter was one of the first UNC alumni to win a Pulitzer Prize. Carter, the founder and editor of the Tabor City Tribune, was honored with a Pulitzer Prize for Public Service for his brave reporting on the activities of the Ku Klux Klan in Tabor City – reporting that led to an FBI investigation and the convictions of almost one hundred KKK members.

When Carter entered UNC in 1939, he was not only the first in his family to attend college, but the first to graduate from high school. In an interview conducted by the Southern Oral History Program, Carter said that the summer before coming to Chapel Hill, he saved up $112 while working in a cotton mill. His first day on campus, he went to Director of Admissions Roy Armstrong’s office and asked whether he thought he could get through school with the money he’d saved. Armstrong encouraged him, saying “I know a lot of people who got through on less.”

Carter immediately got a job at the UNC News Bureau, working about eight hours a day, and also joined the freshmen baseball team. He soon became a sports editor for the Tar Heel (today the Daily Tar Heel).

In 1942, as the United States entered World War II, Carter left UNC to work in a shipyard. After several months, he joined the Navy and was assigned to a hospital in Charleston, South Carolina. After serving there for a year, he returned to UNC – this time as part of the V-12 Navy College Training program. He returned to work at the News Bureau and at the Tar Heel, where he served as sports editor, then as a co-managing editor, and, starting in May 1944, as editor. He was involved in a number of campus organizations and activities, and was tapped as a member of the Order of the Golden Fleece and the Order of the Grail.

After graduating from UNC, Carter moved to Tabor City, North Carolina, to start a newspaper, the Tabor City Tribune. Four years later, after the KKK paraded through the town, Carter wrote his first anti-Klan editorial, headlined “No Excuse for KKK.” Without the support of his community and at great risk to himself, he would go on to write more than 100 articles exposing and condemning Klan activities in the area. The articles drew the attention of the FBI, and nearly 100 members of the Klan were arrested and convicted as a result of the investigation.

In 1953, Carter and Willard Cole, the editor of the Whiteville News Reporter, were both honored with the Pulitzer Prize for Public Service in recognition of their work. Carter continued at the Tribune for two decades before retiring to Florida, where he was a prolific writer on nature, fishing, and other topics. He returned to the Tribune in the 1990s, working there until shortly before his death in September 2009.

The Editor and the Dragon: Horace Carter Fights the Klan, Center for the Study of the American South, http://south.unc.edu/programming/editorandthedragon/