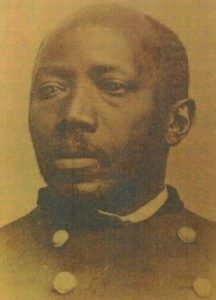 Last week, we spotted an interesting photo on a flier advertising an event at the Chapel Hill Historical Society. The flier included what is apparently a photo of the enslaved poet George Moses Horton. This is a pretty big deal: very little is known about Horton’s life and we were not aware of any images of Horton (other than imagined drawings, such as in this excellent recent children’s book).

Where, then, did the image come from? And was it really Horton? A quick online search for Horton revealed the photo used in several different places: on a poetry website, advertising a lecture, and on a “free social encyclopedia.” However, none of these sites listed a source or any information about how the image was identified as Horton.

The man in the photo appears to be wearing a Union army uniform. Horton was known to have been in North Carolina until the end of the Civil War, when he was reported to have left the state with a Union regiment to find a new home in the north. Could he have been photographed along the way wearing a uniform? It’s certainly possible.

We shared the photo and the story among Wilson Library staff. One archivist thought the photo looked familiar — possibly from the Ken Burns Civil War documentary — but that it had been identified as somebody else, not George Moses Horton. Another archivist did a reverse image search on Google and found that the photo, while most often described as being Horton, is also identified as being another man: Martin Robinson Delany.

Delany was a prominent African American newspaper editor and, during the Civil War, became the first African American major in the U.S. Army. He seemed like somebody who was much more likely to have had their photograph taken at the time. But we still wanted to verify the information: how could we be sure that the photo wasn’t also being misidentified as Delany?

The Wikipedia page for Delany includes a version of the now familiar photo, with a citation to West Virginia University. We got in touch with the special collections library at WVU and quickly heard back from a photo archivist there. The Wikipedia citation pointed to a now-removed web page (sadly a common fate for many Wikipedia citations), but the West Virginia archivist was able to track down an earlier version of the page using the Internet Archive’s Wayback Machine.

That web page listed the photo as coming from the U.S. Military History Institute in Carlisle, Pennsylvania. That organization has changed its name to the U.S. Army Heritage and Education Center, but the collections are still there. The West Virginia archivist pointed to a digitized scrapbook that included the photo we were after.

The photo is included in a scrapbook compiled by the Military Order of the Loyal Legion of the United States. It’s definitely the photo we were looking for and the caption was clear: “Martin R. Delany.”

We can now say, with certainty, that the photo that is widely identified as George Moses Horton is not Horton: it’s Martin Delany. While Delany was a contemporary of Horton’s, there’s no evidence that they ever met or had any connection. The only mystery that remains is, how did this photo ever start to be used to represent Horton in the first place? It’s not as if it was a mystery photo of an unidentified person — it was clearly identified as Delany, who was himself a prominent figure.

Tracking down the source of the original photo was an interesting project, and we want to thank the awesome librarians and archivists who helped us get to the bottom of it. There are two big lessons we’re taking away from this: first, it’s always amazing how quickly misinformation can spread online, even by well-meaning people. And second, whenever there’s the slightest doubt about historical information, not just online but in print, it is always a good idea to go back to the original sources. If the answers are going to be found anywhere, they’ll be in the archives.