Captain Johnston Blakeley (sometimes spelled Blakely) was a successful naval officer during the War of 1812 and the first University of North Carolina alumnus to give his life in military service to the United States.

Blakeley had a long journey to Chapel Hill. Born in County Down, Ireland in 1781, he immigrated to the United States with his family in 1783. Tragically, his mother died during the voyage. His family lived in Wilmington, NC, but he spent much of his youth in school in Flatbush, Long Island, NY.

In 1796 he entered UNC (making him a contemporary of Hinton James) and was a member of the Philanthropic Society by 1797. The first speech he gave to the society “spoke on the happiness of ye farmers.” His later speeches and compositions covered a variety of topics: the education of women, Jacobinism, the advantages of education, self-government, the state of France and America, Brutus’ speech to the Romans, advantages of riches and poverty, and tobacco. He even gave a reading of Ulysses’ speech to Alcinous and the queen from The Odyssey.

In 1797, when Blakeley was 16, tragedy struck again. His father died and he was orphaned, becoming a ward of Edward Jones of Rockrest, Chatham County. Moreover, he was left without money due to a disastrous fire that destroyed his family’s warehouses.

In 1800 he joined the U.S. Navy as a midshipman, becoming a lieutenant seven years later. In 1812 he served on the President and the Enterprise before being made  Master Commandant and put in command of the Wasp and its 173 person crew.  In 1814 he sank and captured a number of British ships, among them were Three Brothers, the Bacchus, the HMS Reindeer and HMS Avon. He also captured the Atalanta, a supply ship laden with wine, brandy, and silk. Though Blakeley had a custom of burning the ships he battled, there was doubt as to the Atalanta’s nationality. Instead, he put Midshipman David Geisinger and a prize crew aboard. On September 22, 1814 the Atalanta set sail to Savannah, Georgia, where she arrived safely in November. No further word was ever received from the Wasp. 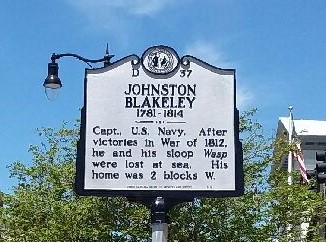 Rumors abound about Blakeley’s mysterious disappearance. A privateer claimed to have seen the Wasp off the Canary Islands. The British frigate Lacedemonian was believed by some to have sunk her off Charleston, South Carolina. John C. Calhoun even heard a report that she was operating in the Pacific Ocean. It’s more likely that the Wasp simply sank due to winds, but whatever the case he and his men never returned.

In January of 1815 his wife, Jane Hoope Blakeley, gave birth to a daughter, Udney Maria. The following year the North Carolina legislature resolved to pay for Udney’s education and to provide the family with funds. The legislature planned to give Udney a sword in memory of her father, but in the end, at her mother’s suggestion, she was given a  silver tea service. In 1904, the US Navy honored Blakeley with the naming of a battleship, the USS Blakely.

A poem written by a “highly gifted and accomplished young lady” demonstrates the power of Blakeley’s legacy:

No more shall Blakeley’s thunder roar
Upon the stormy deep;
Far distant from Columbia’s shore
His tombless ruins sleep;
But long Columbia’s song shall tell
How Blakeley fought, how Blakeley fell.

This entry was posted in Noteworthy Firsts, Uncategorized. Bookmark the permalink.