While women were permitted to attend the University of North Carolina at Chapel Hill beginning in 1896, the enrollment numbers remained small until the 1920s. In 1940, Edith Harbour, woman’s editor of the local News & Observer, wrote to then–Dean … Continue reading →

While women were permitted to attend the University of North Carolina at Chapel Hill beginning in 1896, the enrollment numbers remained small until the 1920s. 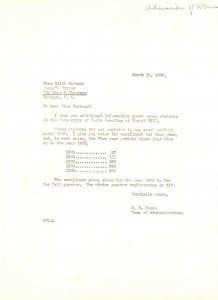 In 1940, Edith Harbour, woman’s editor of the local News & Observer, wrote to then–Dean of Administration Robert B. House for information about the enrollment of women at UNC. He wrote back and included these surprising enrollment statistics: Whereas in 1920, there were only 57 women enrolled at UNC, by 1939, there were 504.

As of January 12, 2013 there are a total of 16,282 women, including foreign exchange and independent studies students enrolled at the university, according to the University Registrar. Women make up 57.9% of the student body. How times have changed. 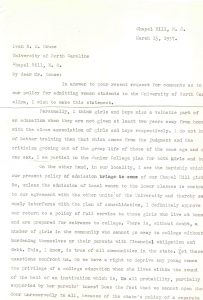 One early advocate for women on campus was Inez Koonce Stacy, adviser to women from 1919-1946. When she wrote to Dean House in 1940, women could be admitted no earlier than their junior year. It was expected that the first two years of study would be done at a women’s college and then they might transfer. Whether this was fair to the women of Chapel Hill was the subject of debate on campus at the time.

Stacy writes, “I definitely approve our return to a policy of full service to those girls who live at home and are prepared for entrance to college.” Her argument rests on the public nature of the university: “Do we have a right to deprive any young woman the privilege of a college education when she lives within the sound of the bell of an institution which is, in all probability, partially supported by her parents’ taxes. 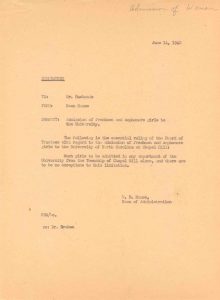 1940 memo on a vote by the Board of Trustees (Robert Burton House Records, #40019, University Archives).

The issue of Chapel Hill women attending UNC prior to their junior year came to a head in 1940 when the Board of Trustees voted on the matter. Dean House issued a brief memo to report that the vote had gone in favor of admitting local women as underclass students. A small step, but this change paved the way for more. Who  would have guessed then that women would become the majority of all Tar Heels less than 100 years later?