December 18th is an important day in both United States and North Carolina history. Several important historical events have happened on this day. For example, the Mayflower docked at modern-day Plymouth, Massachusetts on December 18th, 1620. But at University Archives, December … Continue reading → 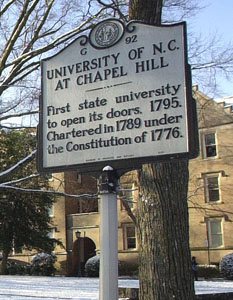 The historic marker that proclaims UNC’s status as the first state university.

December 18th is an important day in both United States and North Carolina history. Several important historical events have happened on this day.

For example, the Mayflower docked at modern-day Plymouth, Massachusetts on December 18th, 1620.

But at University Archives, December 18th is important for two different reasons. One, the mandate for a state-run university in North Carolina, and two, the chartering of the University of North Carolina.

After the Declaration of Independence was signed, North Carolina ratified its first constitution, the Constitution of 1776, on December 18th, 1776. It was in this document that the provincial congress first called for a state-run university.

Article 41 of the Constitution of 1776 set forth the following mandate:

“…that a school or schools shall be established by the legislature, for the convenient instruction of youth, with such salaries to the masters, paid by the public, as may enable them to instruct at low prices; and, all usefull [sic] learning shall be duly encouraged and promoted in one or more universities.”

However it was not until 1789 that the University of North Carolina was chartered. 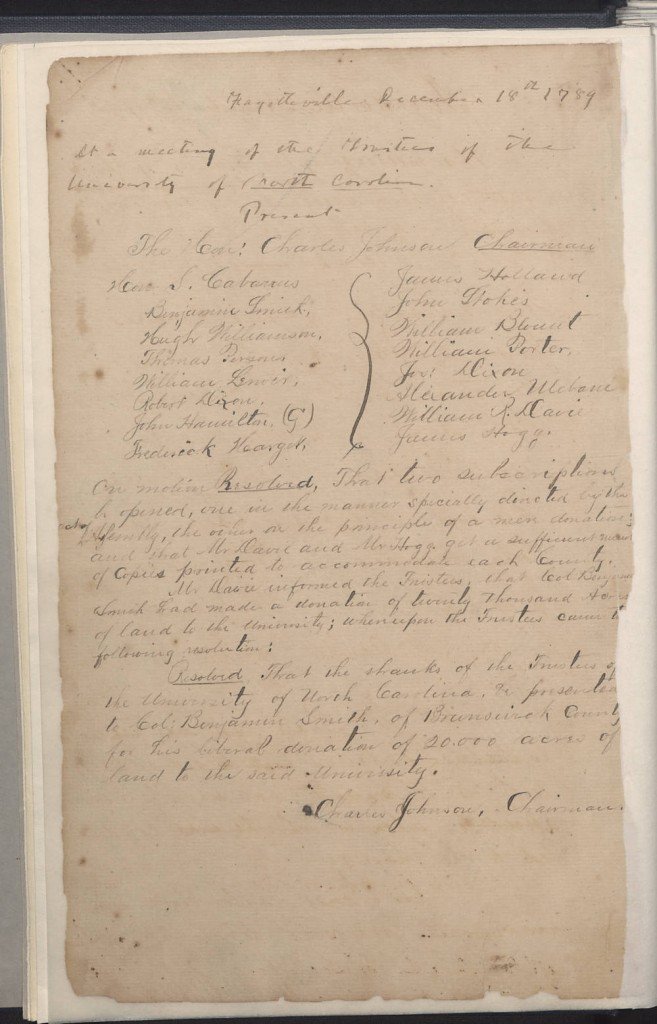 On December 18th of that year, the Board of Trustees convened for the first time in Fayetteville, North Carolina. It was at that meeting that William Richardson Davie informed the trustees that Colonel Benjamin Smith had donated 20,000 acres of land in what would become Tennessee to the University. The trustees sold the land and used the resulting funds to support the fledgling institution in its early years. Later, the Trustees chose to honor Colonel Smith by naming a campus building after him– Smith Hall, which was completed in 1851. Smith Hall is now known as the Playmakers Theater.

While the landing of the Mayflower is a very important moment in United States history, the chartering of the nation’s first public university to open its doors is important, too.

Today we celebrate the University of North Carolina, which has been serving the state for 218 years. But our University would be nothing without the students, faculty, and staff who learn, teach, and work here. Thank you all, and happy December 18th!