Attending a performance or two of “The Nutcracker” is a yearly holiday tradition among many families across the United States. It continues to be a staple in the repertoire of dance companies around the country and for countless theater-goers, a … Continue reading →

Attending a performance or two of “The Nutcracker” is a yearly holiday tradition among many families across the United States. It continues to be a staple in the repertoire of dance companies around the country and for countless theater-goers, a first glimpse into the world of ballet.

The ballet’s music was created in 1892 by Russian composer Pytor Illyich Tchaikovsky based on the story The Nutcracker of Nurembourg by Alexandre Dumas. Dumas, the 19th century French writer most known for penning The Count of Monte Cristo and The Three Musketeers, adapted the story from E.T.A. Hoffman’s The Nutcracker and the Mouse King. The original choreography by Marius Petipa and Lev Ivanov has been developed and changed over time. One of the most famous and reproduced renditions was created by George Balanchine, an enduringly prominent and influential figure in American ballet. (Fisher, 2012)

Like many classical ballets, modifications to the choreography have been made over time. Ballet training, aesthetic preferences and dancers capabilities are much different than they were when “The Nutcracker” was created (Daprati, Iosa & Haggard, 2009). Many artistic directors have also changed the racially and ethnically insensitive depictions of characters in the “Tea” and “Coffee” variations performed in the second act. One of the campaigns at the forefront of these changes today is the online platform Final Bow for Yellowface, led by New York City Ballet’s Georgina Pazcoguin (Lansky, 2018). Overall, directors have adapted the ballet to fit particular time periods, locations and tastes. 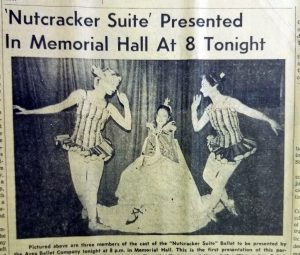 At UNC, the first performance of The Nutcracker was by The Area Ballet in Memorial Hall nearly 60 years ago on May (not December!) 16, 1959. It was choreographed by John R. Lehman and sponsored by the UNC Music Club. (Daily Tar Heel, 1959). In 1978, the Carolina Dancers performed a funnier, “wilder” take on the traditional ballet with magicians on roller skates, punk rockers and candy cane pillows. It featured cameos from some of UNC’s faculty and notable dance professionals from across the Triangle. (Robinson, 1978). This performance was repeated in 1980, with appearances by UNC dancers, and again, dancers from around the city, such as M’liss Dorrance, Jack Arnold and Donald Blumenfeld (Moore, 1980). In 1989, the first occurrence of The Nutcracker: The Play was adapted by Karl Joos for Playmakers Repertory Company from the original E.T.A. Hoffman stories. (Daily Tar Heel, 1989). It has also been adapted by former Artistic Director David Hammond and current Chair of Dramatic Art and Dramaturg for Playmakers, Adam Versényi. 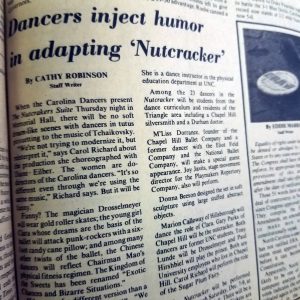 UNC’s performance presenting organization, Carolina Performing Arts, has fused the tradition into the creation of their performance season every year. In 2009, the Carolina Ballet started performing The Nutcracker at Memorial Hall in addition to performing at theaters in Raleigh and Durham. The ballet, adapted by Artistic Director Robert Weiss, has plenty of occurrences of magical illusions, with bodies disappearing and appearing in boxes, trees growing and beds miraculously sailing across the stage on their own. (Strange, 2011). The audience is peppered with young people in awe of not only the magician Dosselmeyer’s tricks, but also the magic of attending live ballet. 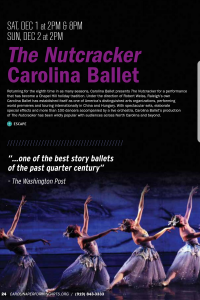