Library lore says that Carolyn Wallace, Director of the Southern Historical Collection from 1975-1987, once declared that the Mecklenburg Declaration of Independence was the single most valuable item in our entire collection.

It is thus no surprise that we have blogged about the Mecklenburg County, NC native before, that digital copies are available online, and that DocSouth provides a full transcript of the document. 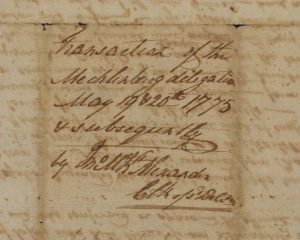 A quick “Meck Dec” crash course, for those unfamiliar with this corner of Southern history: On April 30th, 1819, the Raleigh Register published an article by Dr. Joseph McKnitt Alexander. In it, Alexander said that his own father was present for the signing of the very first Declaration of Independence ever written in the Colonies – dated May 20th, 1775, more than a year before the other Declaration of Independence. He went on to explain that, though the original version of the document was lost in a fire, he owned an exact copy of it. Thomas Jefferson scoffed, but Mecklenburg locals claimed they had witnessed the original declaration with their own eyes.

While scholars still disagree over the document today, each May 20th is celebrated with much enthusiasm in Mecklenburg County, North Carolina. This past “Meck Dec Day” was particularly exciting, as the document was able to make the 140-mile journey from our secure storage in Chapel Hill to a public exhibit in Charlotte. Present for the one-day event was McKnitt’s own great-great-great-great-great granddaughter, along with descendants of many other Meck Dec signers. 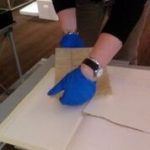 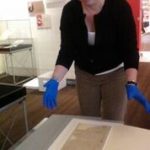 Nearly all of our collections are available to access within the library, but we are particularly pleased when we have a chance to let the items come out to the public. If you were in the Charlotte area, we hope you were able to swing by and see this treasure from the collection.

Special thanks to sponsors, hosts, and supporters at the Charlotte Mecklenburg Library, the May Twentieth Society, the Bank of America Heritage Center of Charlotte, and UNC School of Information and Library Science alumni Anne Harding.