When football arrived on southern college campuses in the late 1870s, it was not without controversy. Some in the South resented the sport’s northern roots, while many others–especially religious leaders–feared that it put players and spectators in unnecessary physical and … Continue reading →

When football arrived on southern college campuses in the late 1870s, it was not without controversy. Some in the South resented the sport’s northern roots, while many others–especially religious leaders–feared that it put players and spectators in unnecessary physical and moral danger. In 1890, the administration of UNC was starting to agree, and after just two seasons of intercollegiate football, the Board of Trustees banned competition with other schools, citing the disorder and injury the game encouraged. 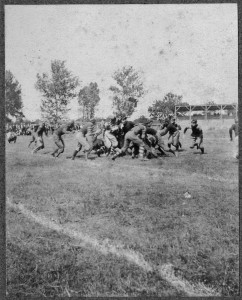 UNC organized its first intramural football teams in the 1880s, and by the end of that decade football was one of the most popular sports on campus. In 1888, UNC competed against Wake Forest in the first documented intercollegiate football game in the South. Spectators reported that the game was disorderly and confused, as neither team had a firm grasp on the rules of the game, and UNC lost 6 to 4. Competition was largely unregulated–there were almost no limits as to who could join the team on the field, and games sometimes dissolved into fights. Within the span of a year, three students suffered serious injuries on the football field–the team’s captain, Steve Bragaw, broke his leg in a game against Trinity (now Duke), and in the following season, student George Graham broke his collar bone and another student broke his wrist. In 1889, the university called for all games to be played on college grounds, hoping that greater supervision might rein in the disorder. When this failed, the faculty recommended a ban, and it was passed by the Board of Trustees on February 20, 1890.

The Board explained that while intercollegiate games were said to encourage exercise, foster inter-institutional relationships, and encourage “the boys of the country” to pursue a college education, the “necessary evils” of the sport “over balanced the benefits.” The Board argued that the sport’s impact on exercise was limited as only a few actually played, while many more neglected their studies to sit and watch. Citing player injuries, they argued that the game was physically dangerous and expressed fear that “the furious rivalry engendered by contests in presence of numerous spectators” encouraged brutality, conflict, and “hatreds” between schools. They not only feared for the students’ physical safety but also their morality, citing the “great deal of betting” that accompanied intercollegiate contests and expressing worry that the ” unusual excitement” caused by games might encourage “drinking and rowdyism.” 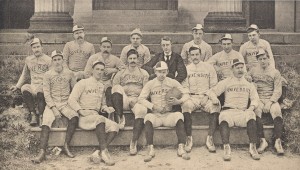 UNC’s football team in 1891, the first season after the ban was lifted (The Hellenian, North Carolina Collection)

Ten months later, a group of students led by football players George Graham, Samuel Blount, Alexander Stronach, Drew Patterson, and Perrin Busbee circulated a petition to end the ban. The faculty formed a committee to discuss the issue (an early incarnation of the Faculty Athletics Committee) and an agreement was reached. Intercollegiate sports were revived, but under the governance of an advisory committee. This committee, originally composed of a faculty member, a graduate student, and an undergraduate, would be instrumental in the administration and regulation of campus athletics in the coming years. UNC’s 1891 season was discouraging, as the team came away with a 0-2 record. However, over the next few years, the Tar Heels developed into one of the best teams in the South, winning the 1895 Southern Intercollegiate Athletics Association championship and going undefeated in 1898. For two of UNC’s rivals, however, the controversy over football continued. In 1895, both Wake Forest and Trinity, motivated in large part by their religious affiliations, banned the sport. Trinity did not field another team until 1920, while Wake Forest returned to the field in 1907.

1880 As a part of the already established Medical School, the University opened a "School of Medicine and Pharmacy," a precursor of today's School of Pharmacy. After the resignation of the Medical School's director in 1886, this early pharmacy program ceased to exist. In March 1897, the Board of Trustees reestablished a pharmacy school and elected Edward Vernon Howell to lead it.
1950 Gordon Gray began his tenure as president of the Consolidated University of North Carolina.