The 67th Annual North Carolina Azalea Festival will be presented in Wilmington April, 9 – 13, 2014.  World class entertainment and millions of azaleas will combine to welcome spring to the Tar Heel state again.  Wilmington’s celebration of spring began in 1948 and each year celebrity guests have been an important part of the festivities. Morton collection volunteer/contributor Jack Hilliard takes a look at a special group of celebrities that came to the New Hanover County port city back in the 1950s. 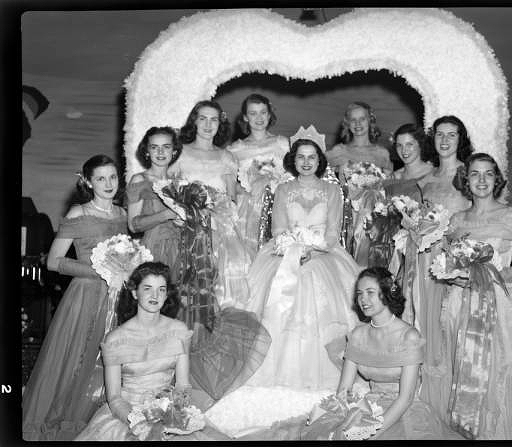 1949 Queen of the North Carolina Azalea Festival, actress Martha Hyer, with her court.

When the 1950 College All-Star football team reported to training camp at St. John’s Military Academy in Delafield, Wisconsin on Thursday, July 20, 1950, UNC’s great All America football star Charlie Justice met up with his old friend Doak Walker from Southern Methodist University (SMU) and new friend Eddie LeBaron from College of the Pacific (COP), which is now University of the Pacific.  Justice and Walker had become friends over the years when both were on most of the 1948 and 1949 All America teams and both had been pictured on the cover of Life.  Walker had been selected for the 1948 Heisman Trophy while Justice was first runner up.  And when UNC was in Dallas for the 1950 Cotton Bowl, Walker had helped the Tar Heels prepare for a game with Rice Institute (now Rice University).  Walker’s SMU team had played and lost to Rice, 41 to 27, on October 21st. Hugh Morton photographed Justice, Walker and UNC Head Coach Carl Snavely during one of the film screening sessions at the Melrose Hotel.  Also, Justice and Walker had gotten into the T-shirt business in early 1950 and Morton had done their publicity pictures.  Quarterback Eddie LeBaron had been selected All America in 1949 as well, and the three “country boys” hit it off.  All three loved watermelon and on the first day of camp they staked out a small country store which sold melons. “Put one on ice every afternoon,” Charlie told the store owner, “and we’ll come by and pick it up.” So every afternoon after practice the trio walked to the store, purchased their chilled melon, took it outside and sat on the curb enjoying the treat.

When game day arrived on August 11, 1950, the three “Mighty Mites,” as they were called (each was under six feet tall and weighed less than180 pounds) took the World Champion Philadelphia Eagles down by a score of 17 to 7. Hugh Morton didn’t attend the All-Star game, but he always included a wire photo from it in his slide shows.

Back in Wilmington after the War, I left town for a week, and while I was gone the local folks elected me chairman of the first Azalea Festival in 1948. —Hugh Morton, 1996

The Dallas Morning News issue of Saturday, March 18, 1950 featured the storybook, Friday night wedding of Doak Walker and his college sweetheart Norma Peterson.  The story said the couple would leave for a wedding trip to Canada “early next week . . . and will take another trip to North Carolina soon after they return.”  That North Carolina trip would be to the 1950 Azalea Festival in Wilmington, held March 30th through April 2nd. 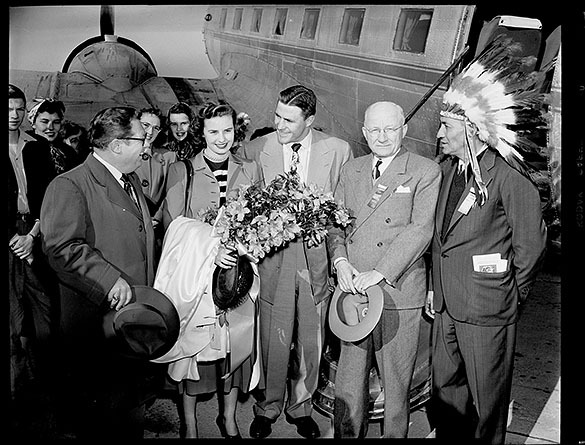 Hugh Morton photographed Doak and Norma soon after they arrived in Wilmington.  Hugh’s wife Julia said in A View Hugh comment back in 2009, “I do remember that Doak and Norma and Charlie and Sarah (Justice) stayed with Hugh and me.  The festival didn’t have as much available money back in those days, and they were our friends.”

Charlie and Sarah Justice had been part of the 1949 festival. Charlie had crowned Queen Azalea II who was movie star Martha Hyer and many remember how the photographers covering that event had insisted that Justice kiss the Queen and he very obligingly followed through on the request.  Morton’s photograph in The State for April 16, 1949 (page 5) showed Justice with lipstick on his face.  (The original negative for this shot is no longer extant, but there is a similar negative made moments apart.) 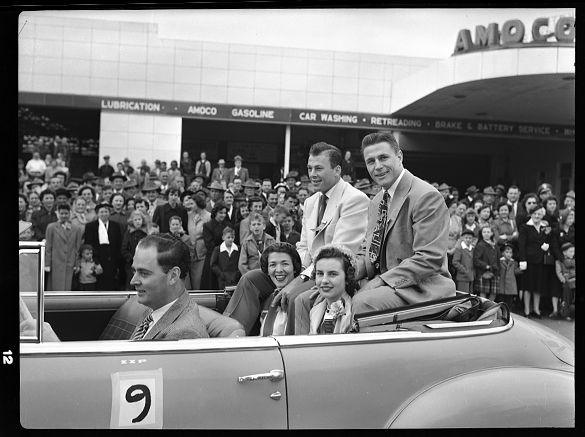 Charlie Justice and Doak Walker during the 1950 North Carolina Azalea Festival parade.  This scan of Morton’s negative shows the entire scene, which is usually cropped in publications.

During the 1950 festival, Morton took several pictures of Doak and Charlie, and Norma and Sarah: a beautiful shot of both couples at Arlie Gardens, and a shot from the parade on Saturday, April 1st. The parade image was reproduced in the 1958 Bob Quincy–Julian Scheer book, Choo Choo; The Charlie Justice Story, on page 112.  The same picture was also included in the 2002 Bob Terrell book All Aboard, but with an incorrect caption.  That image is on page 182. And of course, The State magazine issue of April 15, 1950 (page 3) included a Morton picture of Justice and Walker at the crowing ceremony where Justice passed the crown to Walker who crowned Gregg Sherwood as Queen Azalea III.

When Charlie and Sarah arrived in Wilmington for the 1951 festival, Hugh Morton had put in place a new event. On Saturday afternoon, March 31st, there was a special golf match at the Cape Fear Country Club.  It was called “Who Crowns the Azalea Queen?” and it pitted broadcasters Harry Wismer and Ted Malone against football greats Charlie Justice and Otto Graham—nine holes—winners crown Queen Margaret Sheridan Queen Azalea IV. And the winners . . . Charlie Justice and Otto Graham.

The day following the 1950 All-Star game, Eddie LeBaron left for Camp Pendleton and Marine duty. He would spend nine months in Korea and would receive a letter of commendation for heroism, a Bronze Star and a purple heart. Lt. Eddie LeBaron was back home in time to accept Hugh Morton’s invitation to the 1952 Azalea Festival. Again, as in 1951, there was a “Who Crowns the Azalea Queen?” golf match. This time with ABC broadcaster Harry Wismer, writer Hal Boyle, bandleader Tony Pastor, and football greats Justice, LeBaron, and Otto Graham.  The football guys won and would be part of the crowning ceremony for Queen Azalea V, Cathy Downs. A tightly cropped version of Morton’s crowning shot is also in Chris Dixon’s 2001 book Ghost Wave (unnumbered center picture page).

In March of 1953, Charlie and Sarah Justice made their fifth Festival appearance as Alexis Smith became Queen Azalea VI on Saturday, March 28th.

Eddie LeBaron would return to Wilmington for the ‘58 Festival, along with Andy Griffith who crowned Queen Azalea XI, Esther Williams on March 29, 1958. Morton photographed LeBaron with Andy and NC Governor Luther Hodges.

The “Mighty Mites” were special Azalea Festival guests and were special friends of Hugh Morton, who in 1997, at the 50th Festival was honored with a star on the Wilmington Riverfront Walk of Fame and was the Festival Grand Marshal.

An Epilogue:
Doak Walker’s marriage to Norma Peterson ended in divorce in 1965 and four years later he married Olympic skier Skeeter Werner.  They lived in Steamboat Springs, Colorado until his death as a result of paralyzing injuries suffered in a skiing accident. Walker’s death on September 27, 1998 came ironically 50 years to the day of his Life magazine cover issue.

Prior to the planning sessions for the Charlie Justice statue, which now stands outside the Kenan Football Center on the UNC campus, Hugh Morton visited the Doak Walker statue at SMU.  Morton decided, unlike the Walker statue, that Charlie would not wear his helmet so everyone could easily recognize him.

Hugh Morton “slipped peacefully away from us all on June 1, 2006.”  Those words from Morton’s dear friend Bill Friday.

Eddie LeBaron played professional football with Charlie Justice for two seasons with the Washington Redskins.  After Charlie’s retirement, the two remained close friends.  LeBaron participated in a Multiple Sclerosis Celebrity Roast for Charlie in 1980, and both were Hugh Morton’s guests at the Highland Games in 1984. Justice and LeBaron were also celebrity guests at the Freedom Classic Celebrity Golf Tournament in Charlotte in 1989 and 1990.  LeBaron lives in Sacramento, California and continues to play golf in his retirement.  Due to his diminutive size, 5 feet, 7 inches, and his leadership skills from his military service, he is often called the “Littlest General.”