Nine years ago on September 8, 2005, the “new and improved” Memorial Hall on the UNC campus was celebrated with a grand re-opening weekend. On this special anniversary, Morton Collection volunteer, Jack Hilliard, takes a look back at this iconic … Continue reading →

Nine years ago on September 8, 2005, the “new and improved” Memorial Hall on the UNC campus was celebrated with a grand re-opening weekend. On this special anniversary, Morton Collection volunteer, Jack Hilliard, takes a look back at this iconic building. 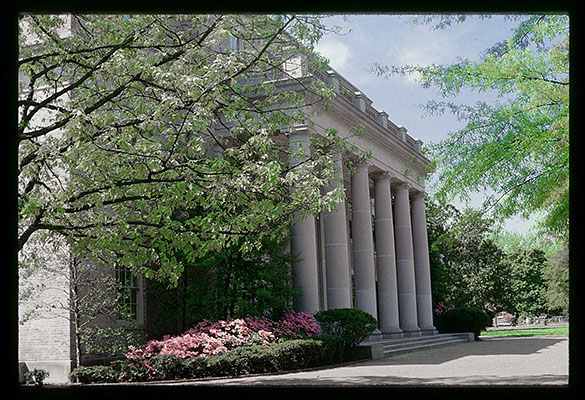 It became painfully clear during UNC’s commencement weekend of 1883 that Gerrard Hall was too small for Carolina’s growing family.  Afterward, officials quickly drew plans for a new 4,000-seat building on a site just west of Gerrard to be named Memorial Hall in honor of David Lowry Swain, President of the University from 1835 until 1868, and North Carolina’s Governor from 1832 until 1835.  Soon after construction began, however, the university expanded the memorial honor to include UNC alumni who died in the Civil War as well as additional outstanding Carolina alumni and North Carolina citizens.

A lagging fund raising campaign and cost overruns plagued the project, but finally construction was completed and Memorial Hall was dedicated on June 3, 1885. A project that had an original estimated cost of $20,000 had a final cost about $45,000. (That’s $1.074 million in today’s dollars.)  Despite a poor architectural design and major acoustical problems, the facility served the University until 1929. In 1896, after the campus gymnasium became a dining hall, Memorial Hall was used as a gymnasium and remained in that capacity until Bynum Gym was opened on May 29, 1905. By 1929, Memorial Hall had suffered major damage to its foundation.  The building was declared unsafe and torn down.

On January 18, 1930 John Sprunt Hill, speaking for the University building committee, recommended “the erection of a modern fireproof building of greater dignity, to replace old Memorial Hall.”  The State Emergency Fund provided $150,000 to construct a new structure on the site of the old hall.  The new Memorial Hall was completed in mid-summer 1931 at a final cost of $182,000 ($2.6 million in today’s dollars).  On University Day, October 12th, the new facility was dedicated and the building was presented to University trustee, John Sprunt Hill, by North Carolina Governor O. Max Gardner. 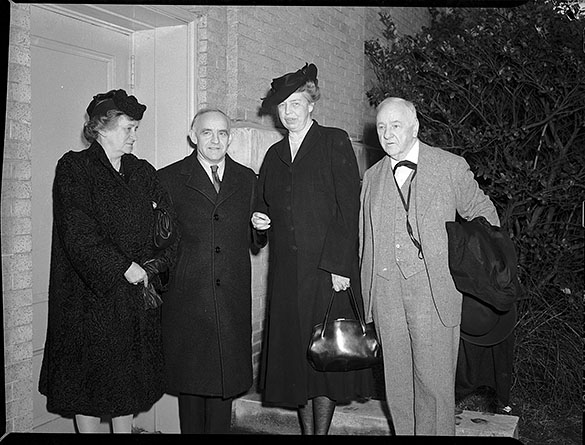 Eleanor Roosevelt standing at the stage entrance to Memorial Hall with her secretary Malvina Thompson on the left, Frank Porter Graham (second from left), and Josephus Daniels (right), during Roosevelt’s January 1942 visit to the University of North Carolina-Chapel Hill, as the keynote speaker at a jointly-sponsored International Student Service-Carolina Political Union conference on “Youth’s Stake in War Aims and Peace Plans.”

Over the years, Hal Holbrook with his “Evening with Mark Twain” made several appearances as did Flamenco guitarist Carlos Montoya. At the height of the folk music era  Joan Baez, and Peter, Paul and Mary stopped by. In 1987 Charles Kuralt and Loonis McGlohon performed “North Carolina is My Home.”  A speakers list includes, Billy Graham, Terry Sanford, and Ted Kennedy. Walter Cronkite and Dan Rather have been featured at the Nelson Benton Memorial Lecture series sponsored by the School of Journalism and Mass Communications, and coaches Carl Snavely, Wallace Wade, and Dean Smith were featured as part of an ongoing series on sportsmanship.  On May 13, 1989 as part of Graduation/Reunion Weekend, Hugh Morton presented a slide show from Carolina’s Golden Age to a near-full house in the storied facility. 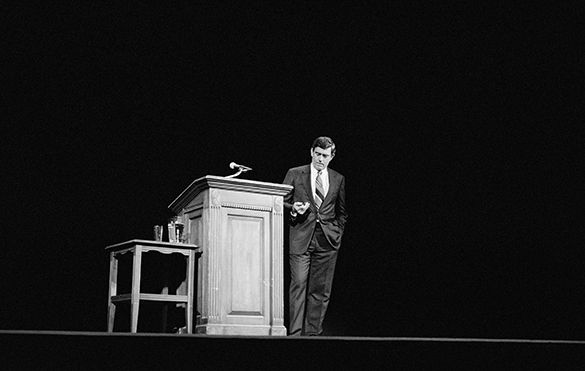 Dan Rather during his appearance at the Nelson Benton Lecture series at UNC-Chapel Hill in Memorial Hall on April 26, 1991.

When UNC’s Clef Hangers completed their annual spring concert on April 20, 2002 the doors to the ‘Great Hall” were closed for a three-year major building transformation. A partnership between the State of North Carolina and hundreds of generous donors funded the $18 million project. The new Memorial Hall now has air conditioning, seven dressing rooms, new marble lobby floor, and a new stage that is twice the size of the original. The auditorium seating configuration is improved with wider aisles and better sight lines.

On September 8, 2005 a ribbon-cutting ceremony kicked off the Grand Reopening Gala that featured stars Tony Bennett, Itzhak Perlman, and Leonard Slatkin—plus our own North Carolina Symphony.  Following the hall’s renovation, Carolina Performing Arts has continued to offer world-class performances in music, dance and theater, and the caliber of performers picked up right where it had left off before closing with Bonnie Raitt, Yo-Yo Ma, Nanci Griffith, and Vince Gill.  In 2005, National Public Radio’s “Wait, Wait, Don’t Tell Me!” originated a nation-wide broadcast from Memorial Hall, and in 2009 the world-renowned Bolshoi Ballet performed a first ever concert in the Southeast.

The future is just as bright for Memorial Hall.  Performances this season include the Pittsburgh Symphony under the direction of Manfred Honeck, and Wynton Marsalis and the Lincoln Center Jazz Orchestra. And of course the Holidays would not be complete without the Carolina Ballet’s performance of “The Nutcracker.”