One hundred and sixty years ago today, eight UNC students were having a rough Saturday morning. The night before, the young men participated in a “revel” in South Building, which was then a residence hall. The party was thrown by friends of … Continue reading → 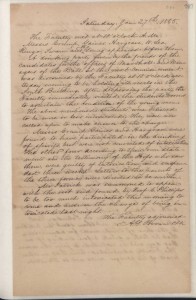 Minutes of the faculty, 27 January 1855. From the General Faculty and Faculty Council Records (#401406), University Archives.

One hundred and sixty years ago today, eight UNC students were having a rough Saturday morning. The night before, the young men participated in a “revel” in South Building, which was then a residence hall. The party was thrown by friends of candidates for the coveted positions of commencement Chief Marshal and ball manager. According to Kemp Plummer Battle’s History of the University of North Carolina, candidates for these positions sometimes sought to curry the votes of their classmates with alcohol. The party was broken up by members of the faculty charged with maintaining order on campus overnight, and the students were ordered to appear before the faculty at 10 AM to answer to charges of intoxication.

Any student who may be seen publicly intoxicated, or in whose room ardent spirits may be found, shall be forthwith suspended or dismissed, as the circumstances of the case may seem to require. This ordinance has been and will be faithfully carried into execution in every instance of its violation. 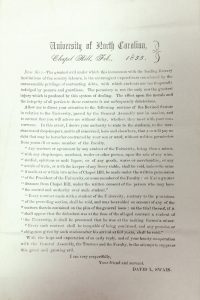 The morning after the party, the guilty students gathered before the faculty to testify. The Faculty minutes explain that three students were “found to have participated in the drinking of spirits but were not convicted of intoxication,” and letters were sent to their parents. Four others, including President Swain’s son Richard Caswell Swain, were “according to their own statements and the testimony of the profs who saw them [found] guilty of intoxication and suspended three weeks.” Another student from the party had been called before the faculty but was “found by Prof. C. Phillips to be too much intoxicated this morning to come and answer the charge of being intoxicated last night.”

A few weeks later, perhaps in response to incidents like this one, President Swain issued a notice to parents asking for their support of a new regulation. Its aims were twofold–to further limit students’ ability to purchase alcohol and to curb student debt. Under the new rule, students would not be able to accrue debts in their parents or guardians’ names without their written permission, or, in the case of purchases made within two miles of the University, the permission of a faculty member. The revised statue was approved by the following spring.

1932 Graham Memorial, the first student union, opened and was dedicated. Every student paid $1 per quarter for the privilege of membership.