In her University Day address earlier this week, Chancellor Carol Folt looked to the past, marking several turning points in the history of the University, including the inauguration of President Edward Kidder Graham in 1915. Chancellor Folt pointed to Graham’s presidency as the … Continue reading → 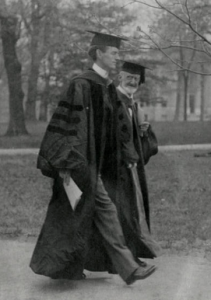 In her University Day address earlier this week, Chancellor Carol Folt looked to the past, marking several turning points in the history of the University, including the inauguration of President Edward Kidder Graham in 1915.

Chancellor Folt pointed to Graham’s presidency as the beginning of the rise of UNC toward becoming a major research institution. Graham also pushed UNC to look beyond Chapel Hill, fulfilling the university’s fundamental responsibility to serve the entire state of North Carolina.

Graham’s inaugural address, delivered on 21 April 1915, has been digitized by the UNC Library and is available for viewing online. It is a lengthy and lofty piece, but worth reading for anyone interested in the history of UNC and of higher education in general. Graham begins by examining the founding vision of the state university as expressed by Thomas Jefferson and the University of Virginia in the 18th century. But he argues that the internal conflict that led to the Civil War and the long period of recovery, especially in the South, prevented UNC and other state universities from reaching their true potential. 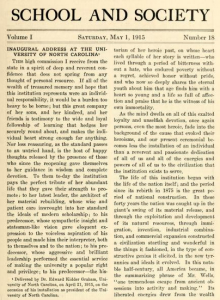 At the dawn of the twentieth century, an era of rapid change and development, Graham looks to the university as a vital component of the “productive democratic state.”  The University, he argues, must look beyond what at the time was a standard curriculum of strictly classical education and emphasize that “no knowledge is worth while that is not related to the present life of man.” This University’s extension program, serving people around the state, was a direct expression of this belief.

However, Graham argues that the University can be most useful to the state of North Carolina, and most effective in educating future leaders, by continuing its focus on the liberal arts. His strong defense of liberal arts education echoes many arguments we still hear today:

“[T]he college of liberal arts and sciences, has as its mission now as always the revelation of the full meaning of life in its broad and general relations, and to fix in the heart of its youth a point of outlook on the field of human endeavor from which to see it clearly and to see it whole.  It fears no criticism of an interpretation of its mission as ‘impractical’ ; but it does regard as fatal any failure to evoke the best powers of its own student body.”

Graham supported the development of professional schools, but was quite clear in his commitment to providing more than just job training at UNC, saying, “It is not the function of the university to make a man clever in his profession merely. That is a comparatively easy and negligible university task. It is also to make vivid to him through his profession–not merely proficiency in making a good living, but productivity in living a whole life.”

Like Edward Kidder Graham, Chancellor Folt is leading the University at a time of dramatic change and in the middle of a lively debate about the purpose of higher education, especially at state universities. Her call for a need to embrace innovation and change in order to better serve the community, the state, and the world, build upon the words and actions of Edward Kidder Graham 100 years ago.