On March 18th, 2012 Bill Richards, a colleague who worked in the library’s Digital Production Center, passed away unexpectedly while watching the Tar Heel’s basketball team defeat Creighton University in the “Sweet Sixteen” round of the NCAA Men’s Basketball Tournament.  … Continue reading →

On March 18th, 2012 Bill Richards, a colleague who worked in the library’s Digital Production Center, passed away unexpectedly while watching the Tar Heel’s basketball team defeat Creighton University in the “Sweet Sixteen” round of the NCAA Men’s Basketball Tournament.  In 1982, Bill was the Chief Photographer for the Chapel Hill Newspaper.  In 1988, he began working as a photographer and graphic designer in the UNC Office of Sports information.  In 1998 he started working in Library Photographic Services, but continued shooting for Sports Information into the 2000s. I am dedicating this blog post, as I have each year since his departure, to Bill who, like Hugh Morton, was an avid UNC basketball fan. 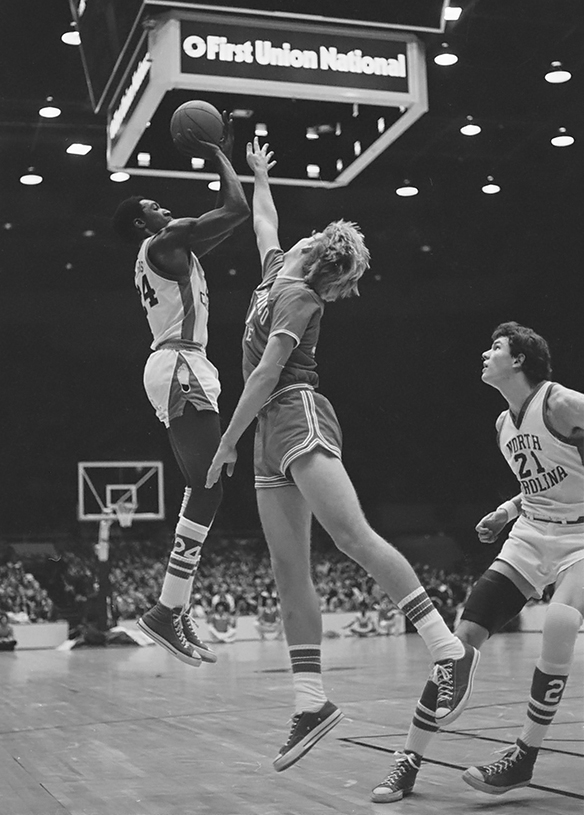 Walter Davis elevates and shoots beyond the reach a New Mexico State defender during first round action in the 1975 NCAA Division I Championship Tournament played at the Charlotte Coliseum. UNC’s Mitch Kupchak watches Davis’s shot in anticipation. (Hugh Morton photograph, cropped by the author.)

In 1975, the UNC men’s basketball team found itself in the NCAA Tournament once again—not because it was yet another year in a long string of consecutive appearances, but because the team did not make the big dance the previous two years. Charlotte hosted the East Regional games in 1973, which was the final year of the NCAA University Division Basketball Tournament; UNC, however, was MIA because they played in the NIT in NYC.  There they finished in third place, making it to the semifinals but losing to Notre Dame 78–71, but defeating the other semifinal loser, Alabama, 88–69.  The next year, 1974, also found the Tar Heels playing in the NIT, but they were one-and-done with an eleven-point loss to Purdue, 82–71 in their first contest.

The 1975 NCAA Tournament was the first to field thirty-two teams without first round byes, and the second that officially determined the Division I champion.  Two cities hosted the first round games for the East region: Charlotte and Philadelphia.  UNC played its first round opponent, New Mexico State, at the Charlotte Coliseum on March 15.  New Mexico State had finished second in the Missouri Valley Conference behind Louisville.  Also playing in Charlotte that day was Furman University against Boston College.  The winners of both these games would head to Providence, Rhode Island for the Eastern Regionals.

With the game just down the road, Hugh Morton was court-side in the coliseum with his camera, capturing Phil Ford, Mitch Kupchak, Mickey Bell, and Walter Davis on black-and-white film.  Eleven negatives survive, five of which can be seen on the online collection of Morton’s photographs.  The Tar Heels easily handled the Aggies, 93–69.  Boston College was also victorious, defeating Furman, 82–76.  Both victors headed off to the Ocean State for their Thursday Eastern Regional semifinals: UNC versus Syracuse and Boston College against Kansas State.

UNC and Syracuse hadn’t played against each other since the Tar Heel’s perfect 32–0 season in 1957.  The twentieth ranked Orangemen from Syracuse upset the sixth ranked Tar Heels in a close game, 78–76.  Boston College fell at the hands of Kansas State 74–65.  Back then, the regional losers played a third-place game, so both teams hung around until Saturday, when UNC whipped BC 110–90.

Morton did not make the journey to Providence, so the only 1975 NCAA Tournament photographs in the collection are those from the first round game played in Charlotte.

1964 Willie Cooper becomes the first Black basketball player at UNC when he takes the court for the junior varsity team. Cooper, from Elm City, N.C., played one year on the JV team.