In July 1916, two tropical cyclones wreaked havoc in many regions of the southeastern United States, especially in the western North Carolina river basins of the Catawba and French Broad Rivers. The first storm hit the Gulf Coast of Alabama on July 5 and 6, coming ashore as a hurricane. A few days later, the weakened storm dropped heavy rainfall over the foothills and mountains of North Carolina. On July 14, a category 2 hurricane made landfall along South Carolina’s coast, passing over the Charleston area.

On July 15 and 16, this system reached the North Carolina mountains as a tropical storm. In some places along the cyclone’s path record levels of rainfall were recorded. In particular, an observer in Altapass, North Carolina, recorded 22.22 inches of rain from 2 p.m. on July 15 to the same time on July 16.

While the storm of early July only minimally affected western North Carolina, it did cause the soil to become saturated and the rivers and streams to rise. When the tropical storm of mid-July passed over the mountains, about eighty to ninety percent of the rainfall became run-off. With such an enormous amount of water never entering the ground and immediately flowing to the already full mountain waterways, the streams and rivers rose rapidly. The results were devastating.

The French Broad River, which flows past Asheville and westward into the Tennessee River, crested at an estimated twenty-one feet, some seventeen feet above flood stage. In addition, the average width of the French Broad near Asheville was 381 feet in 1916; during the flood, it was approximately 1300 feet across. Along the Catawba River, which rises in the mountains and flows southeasterly into South Carolina near Charlotte, the flooding was very similar. In some locations along its path in North Carolina, the Catawba rose almost twenty-three feet beyond previous high-water marks.

All along the rivers’ courses the destruction and loss of life was wide spread. At least eighty individuals were killed, and bridges, houses, factories, railroad lines, and other man-made structures were destroyed. A contemporary report by the federal government stated that property damage was approximately $22,000,000. Adjusted for inflation, this total would be approximately $430,000,000 in 2007.

A textual description of the destruction is difficult, so included below are several images from the flood. These images come from The Floods of July 1916: How the Southern Railway Organization Met an Emergency. 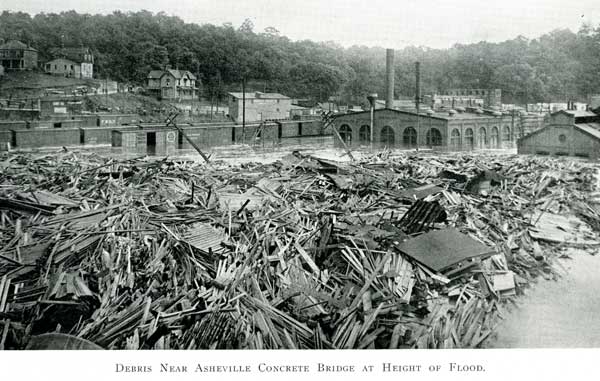 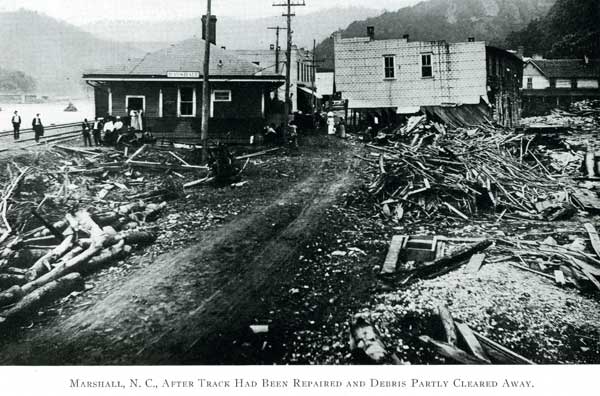 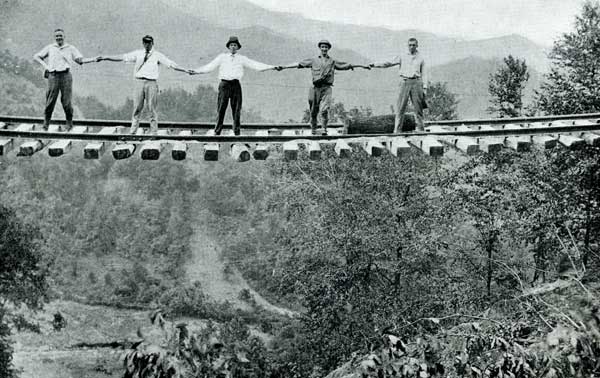