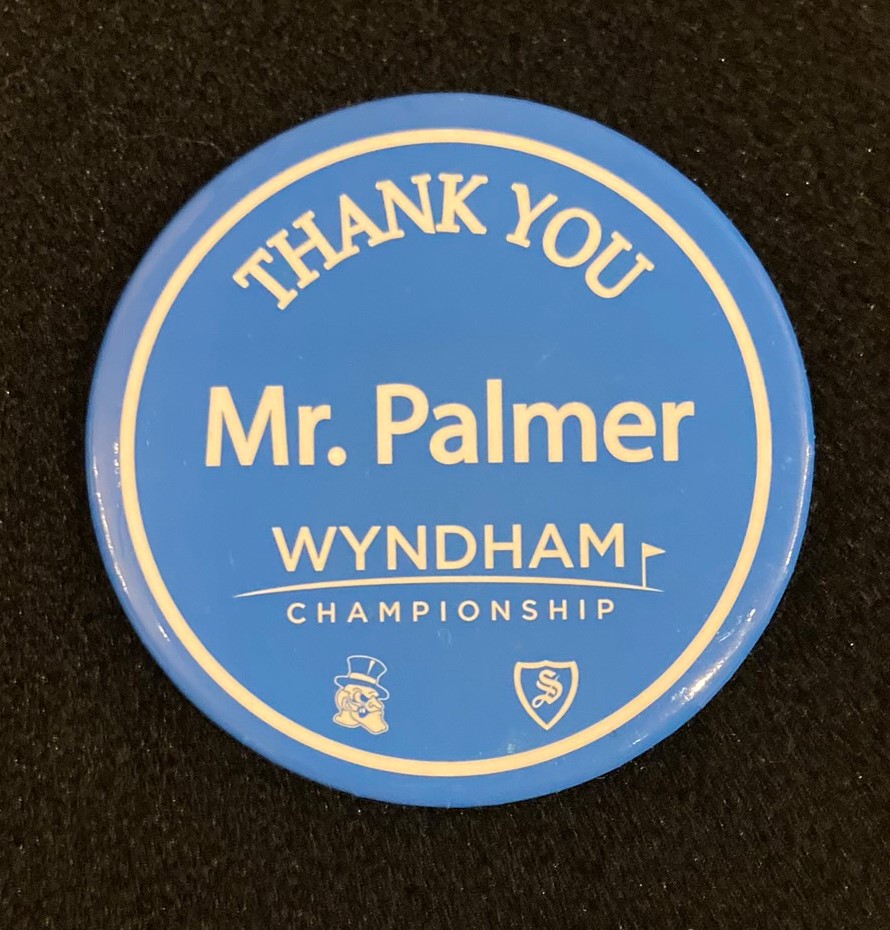 “The social impact of the [1918 flu] epidemic extended well beyond medical masks.

“According to the [Asheville Citizen], the health scare led to the reemergence of flasks, despite the state’s 1908 referendum on Prohibition.  Rather than nipping on whiskey, owners now carried mouthwash in the containers. ‘[I]t’s easier to practice oral hygiene when the disinfectant comes from the receptacle which formerly held … Scotch,’ the paper observed.”

— From “The 1918 influenza changes social norms” by Thomas Calder in Mountain Xpress (Oct. 31) 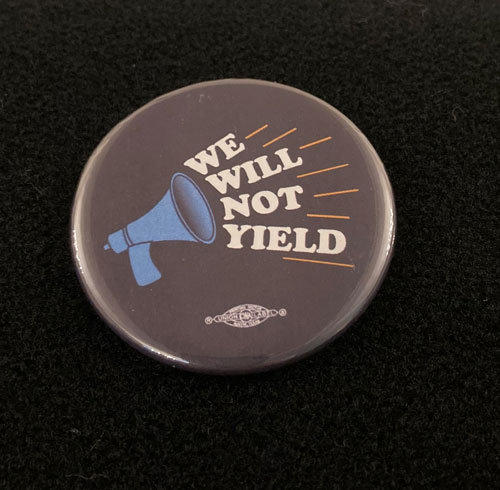 “Rep. Deb Butler, a Democrat who represents New Hanover and Brunswick counties, stood up after the [surprise vote to override Gov. Roy Cooper’s veto of the budget] and began shouting at Republican House leader Tim Moore.

— From “NC lawmaker shamed Republicans over surprise vote in video. Now some call her ‘hero’ “ by Bailey Aldridge and Adam Wagner in the News & Observer (Sept. 12, 2019)

This button was quickly distributed by the N.C. Democratic Party.

Over the years, many classic films have been produced and shot in North Carolina. But the story of the first educational film ever made here begins in 1921. Using the state newspapers available on the Library of Congress’ Chronicling America website, we can track its history. 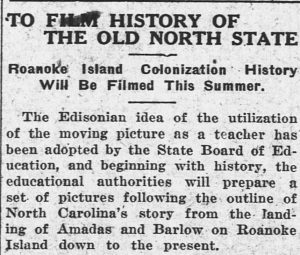 In May 1921, the State Board of Education announced they would outline the history of Roanoke Island, from the British colonists’ ships landing in the 16th century to the 1920s. Captain Albert O. Clement, a photographer from Goldsboro, was initially slated to direct a “picturization” and W.C. Crosby, the director of the Division of School Extension in the state Department of Education, would assist. 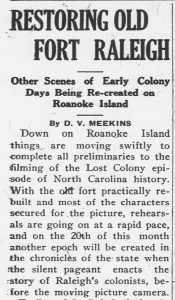 A movie being filmed in North Carolina was a big deal, and even bigger for the people living on location in Dare County. Filming was scheduled for that September, and it would not be a historical recreation “in pageant form, but with an eye to reality.”

The movie was to be directed by Elizabeth Grimball, a veteran theatre play producer, and Dr. Frederick H. Koch, professor of dramatic literature and playwriting at UNC-Chapel Hill. Mabel Evans Jones, the Dare County school superintendent, was to help with production and distribution.

$3,000 in state money was appropriated for the project. One editorial in the Elizabeth City Independent argued that $3,000 wouldn’t be enough to do the project justice, and that the producers would have to rely on “donated properties, donated costumes, and such amateur theatrical talent…” Normally, a project of this size at the time would have required more than $50,000.

Indeed, as pre-production began, nearby counties volunteered their manpower to make the movie a reality. Money and other supplemental resources were brought in by the State Fishing Commission and the U.S. Coast Guard. The people of Roanoke Island built ships and sets. A number of citizens from across the state, including several newspapermen from Greensboro and Raleigh, volunteered to act in the movie. 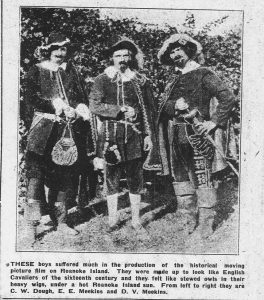 Production for “The Lost Colony” began on September 20th, and there was an excitement in the air surrounding the filming. 150 cast members came from nearby towns – 100 were from the town of Manteo alone.

Producers from the Atlas Educational Film Co. in Chicago were present on set, as well as historian Frederick A. Olds.

News coverage of the filming was very favorable, with reporters remarking on the elaborate scenes, the depth of the story, and the striking colors of the costumes (the film was, of course, in black-and-white). 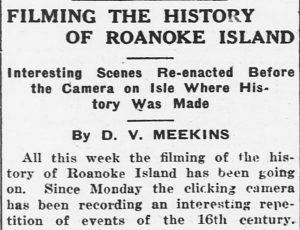 Filming was finished by the 27th. Although there was some grumbling that the film wouldn’t be entirely historically accurate, reporters were gleeful when Crosby promised the finished product would be viewable by around November of that year. Indeed, it premiered on November 7, 1921 in the Supreme Courtroom in Raleigh.

Evidently, Crosby had also promised the people of Manteo that they would be the first people to see it. When Raleigh papers reported that the film would be shown all over the state before Manteo, the town was incensed. They were also hurt that the leading actors were from outside the community and didn’t reflect the time and energy put in by the people of Manteo. 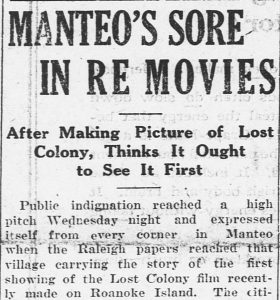 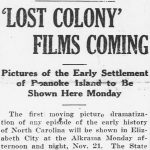 It was quickly rectified – the first public showing would be in Manteo after all, on the night of November 19. The film would be shown in Elizabeth City after that. One writer reckoned that “everybody in Elizabeth City will try to see the great historical film…”

And they did. On November 22 alone, an estimated 3,200 people paid admission to see the first movie ever filmed there. This was the “greatest day’s business” ever recorded by the Alkrama Theatre in Elizabeth City. The 1920 census recorded 8,925 living in Elizabeth City at the time, which would mean nearly 36% of all residents turned out to see the movie.

Hundreds entered the theater without paying, crowding out the doors. Hundreds more were turned away, and the lobby and street outside were so full of people that the police threatened to close the venue. This made theater manager John Burgess “so hot in the collar” that he and the police chief nearly came to blows. 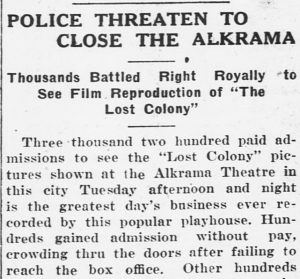 Reviews were mixed. The Independent said it was “lacking in many dramatic details, but as far as it went it was good.” Another editorial remarked on the irony of watching English colonists exact violence against the native Americans living here, arguing that the contemporary colonizing of the Philippines and Haiti prove that “we haven’t progressed much in the more than three centuries since.” 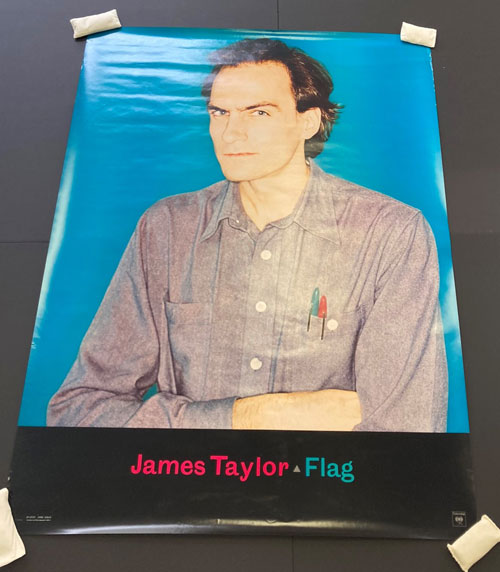 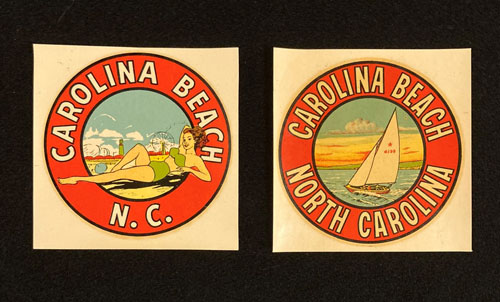 Carolina Beach was the answer for perhaps the most challenging of the Miscellany’s “Where the Heel?” competitions. Would it still be billed today as  “North Carolina’s largest beach resort town”?

I imagine these vivid tourist decals being displayed in a wire rack on a drugstore counter in the 1950s — just about the time Hurricane Hazel almost wiped out the town. 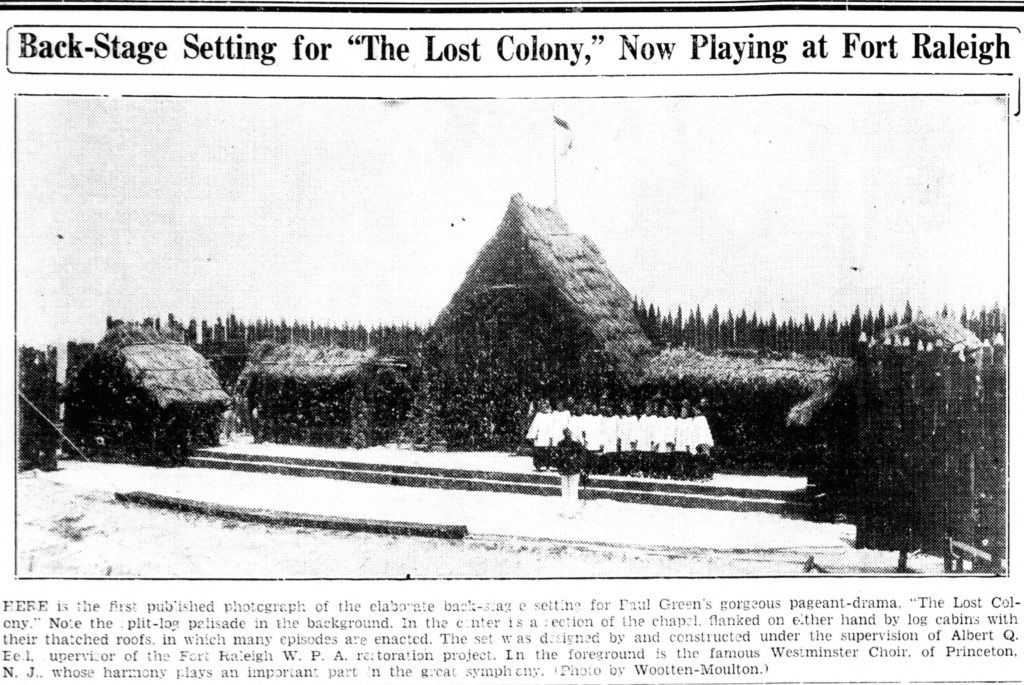 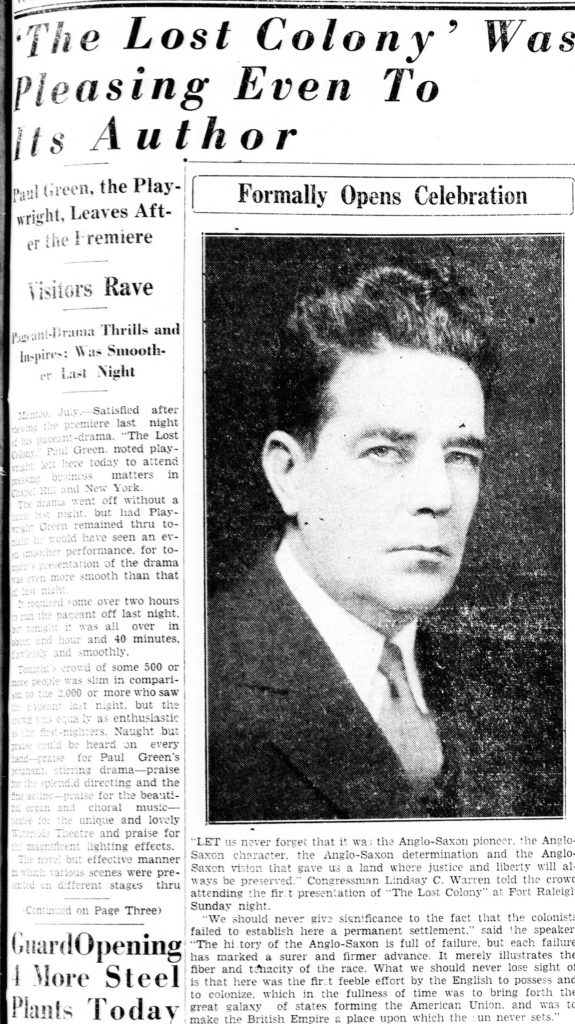 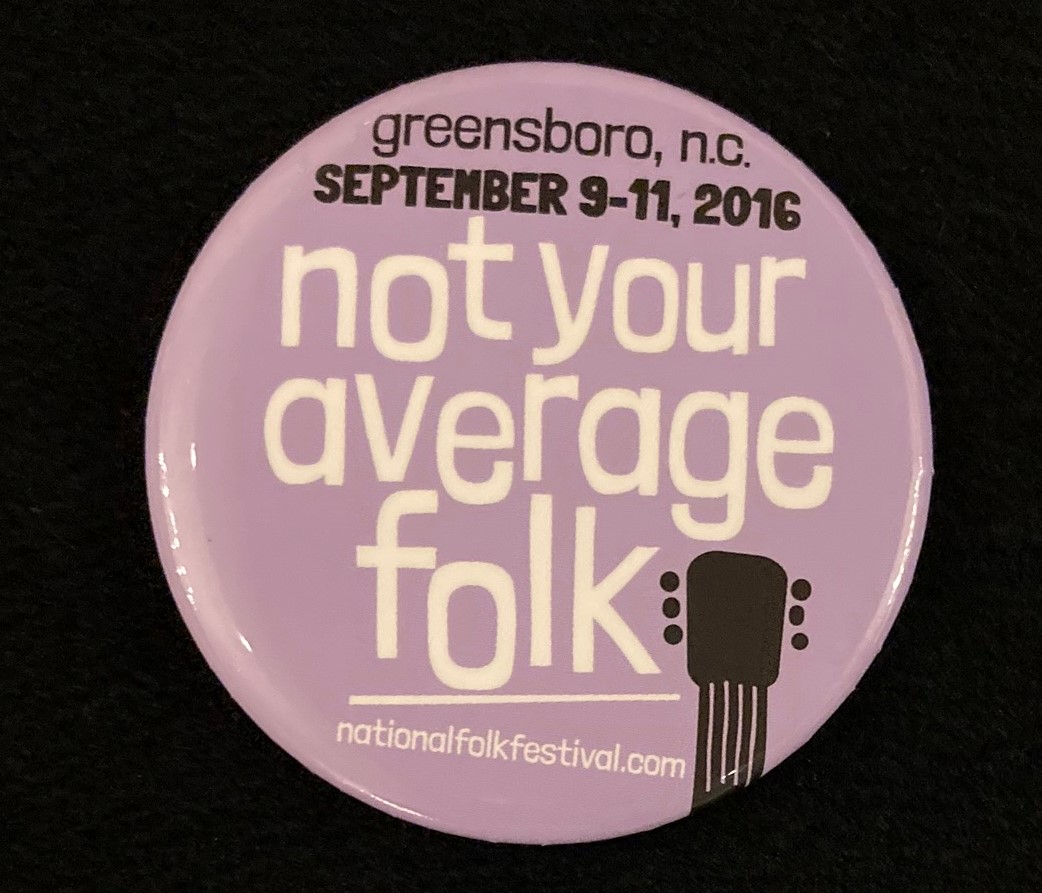 After a three-year run the annual National Folk Festival bid adieu to Greensboro but not without spinning off the locally-staged North Carolina Folk Festival.

“My 19th summer was spent discovering the literature of the Founding Fathers in the octagonal library at Hayes Plantation in [Chowan County] North Carolina.

“Beyond the historical importance of the collection was the room itself–neo-gothic walnut cases with busts above the shelves under a pale-blue domed ceiling and in the center, an early-American eight-sided table heaving with ferns and more books on fantastic subjects like astronomy and geography. The library’s architecture suited its contents, cluing visitors in to the pursuits, passions and vices of its owner.

“I think about this room a lot–and about what will happen when digital books, if ever, replace the old-fashioned kind. I’m hoping books will become more prized as their population diminishes….”

” ‘Parting can be such sweet sorrow or such putrid disappointment,’ critic Ron Charles wrote in a recent essay about the many reasons some book endings leave us cold.

“Hundreds of readers flocked to the comments section to air their personal grievances about the endings that still haunt them….

” ‘Cold Mountain’ by Charles Frazier was a popular choice. But [only one]  commenter was industrious enough to rectify the alleged problem: ‘I was so angry that I rewrote the author’s ending. It only took one sentence . . . “Cold Mountain” went from being a book that I would have despised for the rest of my life to become one of my favorites, simply by changing that one sentence.’ ”

— From “Readers share the book endings that infuriated them the most” by Stephanie Merry in the Washington Post (Oct. 24)

You won’t be surprised that at least one critic vehemently begs to differ.