If your jam band has been touring (with a couple of breaks) since 1983, you generate mountains of merch. But I particularly like this sticker from Phish‘s 2018 performance at the Coastal Credit Union Music Park at Walnut Creek (mouthful!) in Raleigh.

“Nearly forgotten, Dr. King spoke in Raleigh to an integrated audience of about 5,000 at Reynolds Coliseum at 4 p.m. on July 31, 1966. A counter-protest began two hours earlier with speeches at Memorial Auditorium and continued with a march by members from two factions of the Ku Klux Klan….

On this day in 1907: Billed as “an extra added attraction,” Carry Nation appears in Salisbury’s Fourth of July parade. After inspecting local saloons — at 61, she is no longer busting them up — she declares the town a “hell hole.“

Nation’s month-long N.C. tour concludes in Raleigh. Raleigh Electric Co., whose streetcars profit from ferrying her supporters to Pullen Park, pays her $35. She makes an additional $25 from sale of souvenir cardboard and pewter hatchets. 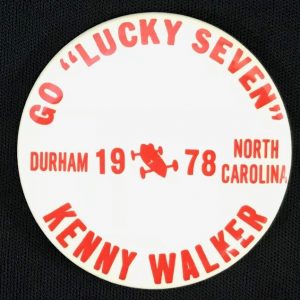 “The existence of a successful jazz club in [Thelonious] Monk’s home state in May 1970 was an anomaly. Woodstock (August 1969) marked the era….Jazz clubs were closing in bigger cities across the country while Raleigh, with a population of 120,000, wrestled with integration. But Peter Ingram — a scientist from England recruited to work in the newly formed Research  Triangle Park — opened the Frog and Nightgown, a jazz club, in 1968 and his wife Robin managed it. Don Dixon, a house bassist at the club who later gained fame as co-producer of REM’s first album, Murmur, says ‘It took a native Brit like Peter to not know that a jazz club wouldn’t work in 1968.’

“The Frog, as it was known, thrived in a small, red-brick shopping center nestled in a residential neighborhood lined with 19th century oak trees. Surrounded by a barber shop, a laundry mat, a convenience store and a service station, the Frog often attracted large crowds; lines frequently wrapped around the corner. Patrons brown-bagged their alcohol (the Frog sold food, ice and mixers), bought cigarettes from machines, and some smoked joints in the parking lot….Due to its mixed clientele, the club came under threat of the Ku Klux Klan, but Ingram never blinked, and the Frog held on, exceeding all odds….”

— From “Thelonious Monk: Is This Home?” by Sam Stephenson in the Oxford American (Fall 2007)

Biographer Robin D. G. Kelley provides a well-detailed account of Monk’s 10-day gig at the Frog and Nightgown — his last visit to North Carolina before his death 12 years later.

“I’ve had it with Briggs Hardware. Again today when they asked what I was looking for, I was at a loss to tell them. ‘Something wooden,’ I’ve told them in the past. ‘Something shiny.’

“I don’t want a tool to do something with; I just want something to draw. In the toy department I asked to look at one of their jack-in-the-boxes. The saleswoman got snippy when I didn’t want to buy it, and when I reached for my knapsack and said I could explain, she said, ‘I don’t want to see none of your old mess.’

“I turned to leave and saw all the employees standing at the front counter talking about me. They think they’re hot stuff because the store was pictured in National Geographic.”

On this day in 1831: In Raleigh, a workman who goes to breakfast in the midst of soldering leaks in the zinc roof accidentally burns down the Capitol.

Backers of Fayetteville, a larger town with livelier commerce — that was just recovering from its own disastrous fire — will lobby unsuccessfully to have the capital relocated there.

“I found a job. Today I’ll work, really work, for the first time since December. I’ve been hired as a waiter at a little restaurant next to the Arthur Murray Dance Studio called the Breakfast House, so I’m up at five. The last time I was up at five was because I hadn’t gone to bed yet.”

Sedaris spent the late ’70s and early ’80s in Raleigh, working odd jobs, making art and getting high. Despite his record of unreliable narration   “Theft by Finding” more often than not struck me as credibly poignant. The guy can sure tell a story.

“I had first encountered [Dorton Arena] in an architecture class, where my professor waxed poetic about this dramatic modern building, noting that had its designer, Matthew Nowicki, not been killed in a plane crash, he would have become one of the outstanding avant-garde architects of the 20th century….

“Nowicki’s Raleigh pavilion bears positive comparison with some of the magnificent grand spaces of history — the Pantheon in Rome, France’s Amiens Cathedral, and the original Pennsylvania Station in New York….

“Although pretty much taken for granted in a capital city that has choked itself with unbridled and hideous suburban development…this architectural wonder also stands as a testament to North Carolina’s golden age, when it was emerging from depression and world war to become the symbol of a progressive New South — a leader in education and modern architecture.”

“John O. Dolson died in a military hospital in Gettysburg, Pa., on Sept. 3, 1863, two months after the Civil War’s bloodiest battle left him with a punctured lung while engaged in a critical Union counterattack on the rock-strewn hill known as Little Round Top….

“Dolson was wounded with a Minie ball to the lung on the second day of the Gettysburg clash, but we don’t know much more. In fact, history lost track of him for nearly 150 years.

“But in 2006, researchers unearthed a major typo as they combed through records from Camp Letterman, the military hospital where Dolson died.

“Dolson was buried near the hospital until 1871, when Southern states raised funds to disinter and return Confederate war dead. That’s when the sharpshooter from Minnesota headed south by accident.

“Dolson joined 136 Confederate soldiers whose remains were buried at Oakwood Cemetery in Raleigh, N.C. A headstone in Oakwood was chiseled with the name John O. Dobson of Company A, 2nd North Carolina Infantry — even though muster rolls from the Confederate unit list no such man.

“When researchers a decade ago realized it was actually Dolson buried there, a new, rounded headstone — signifying a Union soldier — was added to the sea of pointed stones marking Confederate soldiers’ spots.

“At 2 p.m. [today] in Richfield’s Veterans’ Park [near Minneapolis], a ceremony will be held to unveil a new marker explaining Dolson’s mislaid remains. They still may be in North Carolina, but now both the old ‘Dobson’ gravestone and a new plaque tell his story at a park in his hometown….”

— From “Two Minnesotans at war, both teens, were witnesses to history” by Curt Brown in the Minneapolis Star-Tribune (May 28)

Josh Shaffer of the N&O was on this story as it unfolded in recent years.